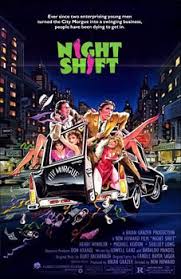 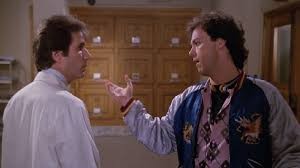 A clever plot and witty humor go a long way in this fun yet dated 80s comedy,

Night Shift is run Howard’s first great movie as a director. it’s also the movie that introduced Michael Keaton to the world. For both men, they were destined for much bigger things in the eighties. Howard went on to make the film splash after this, with tom hanks and a mermaid, while Keaton went on to star in Beetlejuice. But they both really broke through with Night Shift, a very funny movie about two morgue workers who decide to become pimps.

It’s a strange plot, and that’s because just having a comedy set around morgue workers alone is something different. add in the prostitutes and you’ve got something completely creative. At the start of the movie, we meet Chuck, (Howard’s happy days costar Henry Winkler). Chuck is a nice, simple guy who is engaged to a woman who is very nagging and controlling.

Chuck is also the kind of guy who lets people walk all over him, such as a deli that he constantly orders from even though they mess up his order every time. He also lets his boss take advantage of him by demoting him from the day shift to the night shift. His boss does it in order to give the day shift job to his own nephew, and poor chuck is left without a move.

Right about this time, he meets two new characters. the first is a prostitute named Belinda, played by Shelly long. chuck meets her at the start of the film, as she’s identifying her dead pimp, but he doesn’t actually realize he knows her until later on. that’s because she lives in his building.

Aside from Belinda, chuck meets his new partner, bill, played by Michael Keaton. Bill is an absolute nut, singing songs wherever he goes, pulling out a tape recorder whenever he has a new idea, and constantly blabbering on about nothing at all. He’s the life of the movie, and that’s the reason why this film was such a breakout role for Keaton.

Chuck starts spending time with Belinda because they both work the nights and have off during the days. She comes over and makes him breakfast and coffee every morning (in her underwear no less), and soon they are pretty close. Soon chuck is realizing the Belinda and her friends need help now that their pimp is dead. they need a man to help them run their business.

And so he brings the idea to bill, and just like that the two of them are the new pimps in town. it does take a little convincing of the girls. Chuck and Bill have all the girls come down to the morgue, where the two guys draw it all out for the girls on a chalkboard and explain their plan. Bill is hilarious as he tries to break down and analyze the word “prostitute.” the only part of the word he really analyzes is “tit.” And when the girls realize that this guy is completely full of it, chuck takes over and explains how he can help them.

And now we’re a little past the halfway point of the movie, and the plot has finally come together. The business is up and running and going smoothly. Bill acts as the driver for the girls, chauffeuring them around in his hearst vehicle which is long like a limo (I wonder if that’s where the idea for this movie came from), and he puts fake padding into his shoulders to look like muscles in order to be intimidating.

As the movie goes on, new problems arise. there is a relationship that develops between one of the call girls and one of the guys. That seemed kind of obvious, but what is interesting is that once it starts, the guy suddenly has a problem with her being a prostitute. and who can blame him? Aside from that, there are also the other pimps, the ones who killed Belinda’s old pimp at the start of the film. These guys have finally caught onto what’s happening and they’re not too happy about it.

Night Shift is a very funny movie. it definitely feels dated, as it was made in the early eighties, but it is still a lot of fun. the storyline is pretty wild and the characters really carry it through. Michael Keaton is clearly the life of this movie, but both Henry Winkler and Shelly long are also pretty fantastic. Winkler in particular pulls off the simple everyman character with a lot of heart. and director run Howard keeps the comedy just right, meaning there’s humor all around, but it never gets in the way of the entertaining story.