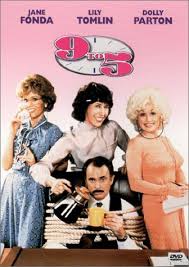 A pretty funny movie with a solid storyline that spends a lot of time on setup before really diving into the main plot.

A pretty smart movie, this one really takes its time with the plot, unraveling a little bit at a time so that each part of the movie ends up being very different from the others. The first part is all setup and it lasts for a solid forty minutes or so. That’s a good thing, because it’s getting us interested in what is to come. and boy does the movie get good after that. What starts as just a usual film about a jerk boss (like Swimming With Sharks), ends up going way out of the park with fake deaths, hospital mix ups, and a kidnapping. the momentum keeps building here, and while things get wrapped up way too neatly at the end, the movie is still a lot of fun. the pacing and structure of the story here are what really make this movie work.

Nine To Five is good, but not great. it’s a cute and fun movie that does go in some unexpected directions. at least before the movie really gets started. after that, the inevitable of what is going to happen becomes more and more predictable. but that’s okay, because the movie does something very smart. it takes its time getting there. at least half this movie takes place before the real plot of what these girls do, actually begins. and that means half the movie is setup, getting us warmed up and ready. it works pretty well, compared to a movie that tried to stretch its plot from beginning to end, and started out good, but then had nowhere to go or went on too long. Nine To Five has none of those problems.

the movie starts with a new girl being welcomed to the office for her first day of work. this woman is Judy, (played by Jane Fonda), and she is coming to work at a place called consolidated companies, which is basically just a large corporation. we never find out many details about what exactly they sell or do there, and that’s because it’s not really important. instead, this movie is focused on the life of the employees at their jobs, and how their boss treats them.

The other employees are violet (lily toiling), and doralee (dolly Parton). when Judy comes in on that first day, it is violet that takes her around showing her everything. she fills Judy in on everything she needs to know, and introduces her to the boss, Franklin hart jr. (dabney Coleman). violet tells Judy how she has been hear longer than hart and remembers training him on his first day. now he’s the boss, and she is working under him.

We switch gears, away from Judy’s story to watch doralee when she goes into hart’s office. he has her sit down across from him to dictate a memo to her. and while she is writing things down, he intentionally knocks over his penholder so that she will have to bend down to pick it up. that’s when he leans over to try to see her boobs. as if that wasn’t enough, he goes over and bends down onto the floor with her to get a closer look. this guy is a definite pervert.

He sends Judy and violet out to buy a scarf for his wife. when violet objects, saying that buying a scarf for his wife is not in her job description, and he tells her that it’s comments like that which are the reason why she never gets ahead. so Judy and violet do go to get the scarf, and they give it to Mr. hart. no sooner do they do this, and Mr. hart has called in doralee and given the scarf as a present to her. he comes onto her pretty strong this time, and she has to push him away. that’s when his wife walks in, sees him on the floor, and somehow buys his excuse of what he’s doing there. then the wife compliments doralee’s scarf.

The women who work in the office have a problem with doralee, and that’s because they think that she is having an affair with the boss. apparently he even tells the other women who work for him that its happening, and it isn’t until violet misses out on a promotion she was promised and confronts doralee about sleeping with the boss, while in front of him, that the truth comes out. doralee is now furious. she put up with hart’s bad behavior before, but this has gone too far. and now she knows why the other women at the office never talk to her.

The women go to a bar that night to discuss their problems with each other about their boss. for Judy, the problem is that she just saw a coworker get fired for a tiny grievance. she tells the other girls about it, and they both have their own problems with him, between not get promoted and the lies about the affair that he started. they go to violet’s house, smoke some pot, and start talking about their fantasies of the terrible things they would like to do to their boss.

The fantasy sequences are a lot of fun. especially in the ways that they are each very different, and that each one becomes more funny and less conventional. it goes from a hunt around the office, in Judy’s fantasy, to a rodeo roundup in doralee’s, to a snow-white fairy tale complete with animated animal characters in violets. and the coolest thing about these is that all three of them end up coming true. in the scenes that follow the fantasies, doralee ends up tying the boss up with a rope, Judy ends up holding a gun on him and shooting out his window, and violet ends up poisoning his coffee.

The next part of the movie is about the girls going to the hospital, where they think their boss is dead, and kidnapping a body. this is the funniest and best part of the whole film as the women do some crazy things that even they can’t believe they are doing. especially violet who dresses up like a doctor, pretends she is one, and steals the body of someone else.

From there, the real plot of the movie comes out, which involves the girls kidnapping their boss, tying him up, holding him hostage for about a week, and making changes all around the office. the fact that this is all saved for the final third of the movie is very smart. if this movie was divides into three parts, it would be the office and setup for part one, the fantasies and hospital sequence for part two, and then the kidnapping and holding the boss hostage for part three. it all works out because each of those three parts is very different. in the end, everything gets wrapped up a little too neatly, but other than that, this is a pretty good movie. none of the characters or actors is especially great, but the story sure is, and so is the way that it is paced and delved out, one part at a time. this is a pretty fun movie.