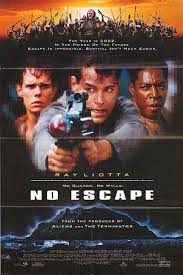 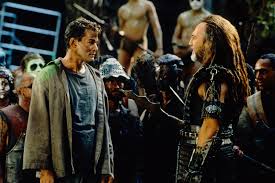 No Escape is a very cool movie. It’s a futuristic action adventure film that takes it’s characters out of a maximum security prison and drops than on a secluded island to fend for themselves. In that way it’s kind of like Battle Royale or hunger games, only this isn’t a one man on the hunt for survival story like those others. This isn’t another take on the most dangerous game. Instead, when the character, Robbins, (Ray Liota), gets to the island, he finds that there is a whole world there already established.

The world is that of primitive living. There are two groups of people, they have both made their homes out of whatever materials the forest, and land gives them. This doesn’t look futuristic at all, and that’s the point. These men, on this island, have been reduced to the age of hunters and gatherers. Aside from one super powerful gun that Robbins steals, the men use weapons from the Middle Ages such as spears and bows and arrows.

The movie begins with Robbins going to prison. The opening credits scene is boring as hell, as it just freezes on one shot and stays there until the credits are done. But once the movie starts, it moves pretty quickly. Robbins is in a prison run by a warden from hell. This guy watches and listens to everything his prisoners do. He has their rooms bugged. And when one of them takes a little extra food to save for his friend, the punishment is brutal. Robbins crosses the line in this prison, attacking the warden, and gets himself a one-way ticket to the island.

The island, known as Absolom, is basically composed of an open area of land with a woods area on one side of it and a giant fort on the other side. Beyond the fort is the ocean. And if you get too far into the ocean, the warden’s boys show up in a helicopter and blast you to bits. Robbins lands in the open area and runs straight into the woods. Big mistake. He finds himself being captured by a group of very primitive people, known as the outsiders.

These guys are savages. They are run by Marick, and for initiation, Robbins is thrown onto a bridge, over a pool, with a giant fat guy, each of them holding a spear. It’s meant to be a fight to the death, but the way Robbins deals with the situation is pretty fantastic. In fact, it is probably the funniest moment in the film, and also one of the smartest. He earns himself a spot in Marick’s camp; only Robbins doesn’t want it and ends up running away.

Realistically, I don’t know if he would have done this. After all, at this point he doesn’t know that there is anything else out there. He doesn’t know about the other camp behind the fort. Still, running away gets the story moving in the right direction, and so he does and is hunted down by these outsiders. Eventually the good guys who take him in and bring him to their fort find him.

Once at the fort, Robbins meets all sorts of interesting characters. There is the father, leader of the group, played by veteran actor Lance Henrickson. This guy has had some very memorable futuristic roles. He played the robot bishop in aliens, for one. Here, he is great as usual, playing an older man who is looking for a replacement. He’s the guy who talks to Robbins about his past and tries to get the man to forgive himself and get over his demons.

There’s also Ernie Hudson (one of the original Ghostbusters!) as the head of security. And Kevin Dillon as Casey, the naive young guy who probably shouldn’t be here, living among these roughnecks. This is Kevin Dillon long before he became mainstream with entourage. Here, he talks exactly like his older brother, matt, and does a lot for his character. Casey wants to be Robbins’ friend, but the man doesn’t want any friends and lets the world know it.

The movie becomes about two things. Fighting with Marick’s outsiders and getting off the island. The fights with the outsiders are like wars. There are two of them, and both are carefully structured pieces of work. The first fight, in particular, happens on Christmas Eve and is pretty violent and thrilling. And the second one comes at the end of the movie. In between, there is a cool plot twist situation where Robbins finds himself back in Marick’s camp.

The movie is very dirtying, grungy, and primal in all the best ways that a futuristic violent thriller should be. A lot of futuristic movies go for the glamour and the glitz of how nice things will be in the future, but this movie is more about the depravity. It’s kind of like Brazil in that way. This is director Martin Campbell’s first big movie, and in many ways it shows the touch of a genius. Campbell of course went on to be the bond movie director who launched both Pierce Brosna (directing golden eye), and then Daniel Craig (directing Casino Royale). With no escape he has a movie that is equally violent and creative. It’s the kind of movie that wouldn’t get made so easily today, because it’s ideas would be thought of as a little too simple, but that happens to be the point. This is a situation of humans reduced to nothing and struggling to survive. The fact that is becomes about forts and middle age-like violence is a testament to how cool the ideas are. It might not be the smartest movie in the world, but it is certainly a lot of fun.