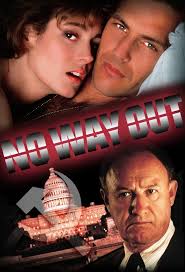 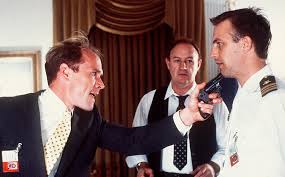 A very cool and twisty thriller that starts off a little slow, but picks up in a major way after the first big plot point.

No Way Out is one of those great political thrillers that involve murder, cover-up, and scandal. It’s the kind of movie that started being made in the seventies and stopped being made good by the end of the eighties. But during the eighties there sure were a lot of them, like this or F/X, and they all had pretty interesting plots to them. They all featured the kind of storyline, rich with surprises and unexpected twists that Alfred Hitchcock would probably be making if he were alive today.

No Way Out is about a soldier who is old friends with the assistant to the U.S. secretary of defense. That assistant is played by will Patton, and he hires the soldier, Farrell (Kevin Costner) to become a part of the secretary’s team. The secretary is played by gene hackman. So right away, there’s a great cast. And there doesn’t seem to be any mystery at all other than who the people interviewing Farrell at the start of the movie were. The answer to that will come much later.

Everything seems to be going fine for Farrell, including the fact that he’s dating a beautiful woman named Susan atwell (Sean Young), and she is also seeing the secretary of defense. Atwell is open with Farrell about this, and he might not be happy about it, but at least he appreciates her honesty. The secretary, however, doesn’t know a thing about Farrell and how Susan is dating him. And after a long weekend where Farrell and Susan go away, the secretary shows up at Susan’s house wanting to know whom this other man she’s been seeing is.

Now Farrell was at the house when the secretary pulled up to the sidewalk. Susan asked him to leave out the back door, and so he did, but he also saw that the secretary was there. The big twist and incredible first plot point of the film comes when the senator goes inside the house, blows up at Susan for going away with another man, and ends up killing her.

It is the will Patton character, Scott Pritchard, (the secretary’s assistant) who is called in to clean up the mess, and he ends up putting Farrell in charge of the investigation. Only there’s one more twist. These guys are looking for the man who Susan was seeing. The man who she spent the weekend with. They mean to blame the murder on whoever this person is, and they even find a way to link him to a soviet spy named Yuri, who they have been looking to catch for some time now. They find a way to narrow it down and simplify their explanation so as to look like Yuri is the man who killed Susan. If they find the man who killed her, or even the man who went away with her, then they find Yuri.

It’s a hell of a setup. The genius of it all, of course, is that Farrell is basically looking for himself. And he knows who the real killer is, but also knows that he can’t do a thing about it since that man is his boss. To make matters worse, there is a Polaroid picture that Susan took of Farrell, which never quite developed. If it does get developed, then it will show who the man was that she was with. And on top of that, Pritchard hires two hit man assassins to help him with anyone he needs taken care of.

Tom Farrell suddenly realizes he’s in a lot of danger. Once the Polaroid develops, it’s going to show that the man they’re all looking for is he. And some of Susan’s friends, who are being interviewed, like her best friend, Nina, know tom. She also knows more than she’s letting on to anyone, and Pritchard realizes that, so he sends out his two goons to go and kill her.

Tom gets in the way and we get our first chase turned action sequence. There will be many more that follow, so long as these two assassins are around. But first Tom has to deal with that photo. Luckily he is old friends with the guy who is in charge of developing it and is able to call in a favor to get the picture development stalled, but the more tom tries to slow things down, the worse they end up getting.

No Way Out is a hell of a conspiracy movie. It’s got that wonderful initial setup, but aside from that it really moves along nicely afterwards with great twists and some very fun action scenes. The more the tension rises and things start to close in on tom, the more people start ending up dead. And by the end of it all, we get a very surprising climax involving our three principal players all in the same room.

This movie has a lot going for it. There’s the stellar cast, the intriguing plot, which at one point calls for the entire pentagon building to be shut down and evacuated, as every employee must file past two eyeball witnesses who know what the killer looks like. There’s even a final twist that nobody could have seen coming. It’s the kind of twist that goes back to the beginning and makes us remember how the movie started out and what we were wondering about even back then. That end twist might feel tacked on to some, but I think it gives the movie one final push and one last reason to be considered a very cool film.