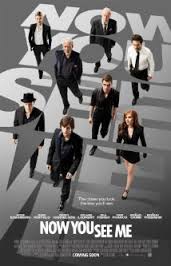 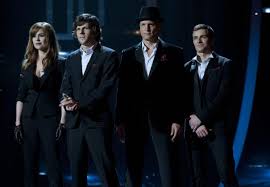 A movie full of deception, and not in a good way, this one lies about nearly everything, including who the main character is.

Like a star-studded b movie, this one is exactly what you might expect knowing the director. that means it might look like a film about magic, but in actuality, it’s about a detective investigating the magicians and trying to follow clues. neither the detective nor the investigaton is very interesting, and so what seems like the story that might have promise turns out to be the same old lifeless thing. the movie achieves success when it focusses on the team of magicians or on the tricks they are pulling off. but then it goes away from them for large periods of time, and loses the things that make it worthwhile. on top of that, whatever surprises are in this movie feel inauthentic and forced. there are things to like about this movie, but for the most part it turns out to be just a series of missed opportunities.

Now You See Me is not a very good movie. That shouldn’t be a surprise considering that the director is Louis Leterrier, a guy who constantly takes promising ideas and turns them into crap. This guy is to action movies what Brett Ratner is to comedies. That is to say, Leterrier’s movies aren’t all awful, and definitely have redeeming qualities, but not a one of them can be considered very good. his films include the Transporter 2, the Ed Norton incredible hulk movie, and clash of the titans. While there are some cool scenes in each of these movies, the stories always tend to be pretty basic and uninteresting, and the characters aren’t much better.

Nearly a decade ago, in 2006, we were given two competing magician movies. Those movies were the prestige and the illusionist. Both had talented casts, but only one of them had a quality director. Christopher Nolan made the prestige, and it turned out to be an excellent film, filled with mystery and suspense. The illusionist wasn’t nearly as good. Now you see me is the worst of the three. That’s because this movie wants to say it’s about magic, but really it’s about a detective trying to solve a crime, which is basically the usual kind of film. unlike those other films which really were about the world of magicians, this one takes a generic storyline and decides to feature magicians as the crook instead of say, armed robbers.

at the start of the film, we meet our four magicians and watch each one of them at work. getting into who these guys are outside of the team, is the most interesting quality of the movie. each character has his or her own specialty, and it’s nice to get to know them a little, before they are all packaged together. unfortunately these are the only scenes in the movie like this. the actors who make the team up are jessie eisenberg, woody harrelson, isla fisher, and dave franco. we see each of them doing tricks for audiences and being given a card by a mystertious hooded figure. the different tricks make for some interesting scenes, but once they are done, it’s time to get the four characters together, and for the movie to become about the group working as a team.

the four characters show up in an abandoned new york city apartment building, to face a locked door. dave franco’s character has to pick the lock to get the guys inside. once in there, they are recruited by a previoulsy recorded message from an unknown host who wants them to come work for him. from here we move onto the first show of this team, who call themselves the four horsemen. they get on stage in front of a packed house and perform a trick where they take a man from the audience and send him through time, to a bank vault in france. the man is able to rob the vault.

this brings in a detective, named dylan rhodes (played by mark ruffalo.) from this point on, rhodes will be the main character of the movie. as a result of that, we will start spending less and less time with the magicians. by the time we reach the second half of the film, it often seems like the magicians are barely in it, and the rhodes character has clearly taken over the majority of the screentime with his investigation. now, i understand that mark ruffalo is the biggest name actor in the cast, but he is also the least interesting character of the bunch. and we did not come to see a movie about a cop. we came to see a movie about a group of thieving magicians. changing the story and who the main character is ends up being the first cheap move this film throws in front of us.

rhodes is basically a baffled idiot. there are two older mentor characters who he approaches. one is the man who is apparently bankrolling this team of horesemen. this is arthur tressler, played by michael caine. it seems like tressler is the man calling all the plays until around the halfway mark of the film when something unexpected happens. the problem is, we know this movie is full of deception, and that we can’t trust what we see, so we don’t exactly believe anything about tressler or what happens to him.

the other mentor character is thaddeus bradley, played by morgan freeman. both caine and freeman are christopher nolan alumns, having both been in all three dark knight films, as characters working for bruce wayne. these guys are mature, credible actors who bring a lot to any movie they appear in. unfortunately in this film there is little that either one can do to make the movie more interesting. it is freeman who comes the closest, playing a character who exposes magicians with a behind the scenes television show. but there is confusion and uncertainty to his character as well, so that at times it seems like he knows a lot, but doesn’t want to reveal it, because he is actually a fan of these magician’s work.

part of the problem is that we don’t trust anyone or anything. this movie makes that pretty clear early on, by presenting characters that are very ambivalent and whose motivations are unclear. if we don’t trust, then we can’t get invested. it’s a situation where everyone is a suspect, and nothing is what it seems. there is a lot of eye-brow raising, for example, about the new partner rhodes is given, alma dray, played by melanie laurent (soshanna from inglorious basterds.) it is pointed out to ruffalo again and again that this woman might not be who she says, because of when she started as his partner (kind of like the speech that is given to dicaprio about mark ruffalo conveniently showing up as his partner in shutter island.)

we stays with rhodes for most of the film as he interviews and interrogates different characters trying to make sense of whatever clues he can find. he follows the horsemen through three different shows, hoping to get some answers by the end. none of it is as interesting as it should have been. while most of the plot elements don’t work and just sit there like a log, the few redeeming qualities of the movie come when they show us how tricks were performed. the rabbit in the box trick is pretty cool, using mirrors to make it look like the box is empty. i especially like how this trick is used later on, with a much bigger scale. and then there’s the illusion behind the bank vault trick, and how the audience member at the beginning thought he ended up in france. but for every one of these cool moments, there’s another dopey one like characters getting hypnotized and suddenly playing an imaginary violin.

with so much deception and inauthenticity in this movie, it’s no surprise that the twist ending feels completely fake and ridiculous. without giving too much away, let’s just say that the movie tries to go for a usual suspects master surprise, but forgets that the strings have to all be connected to pull something like that off. it wants us to be shocked because we never saw it coming, but forgets that to do that you have to play fair and leave real bread crumbs throughout the film that the audience just never noticed. it’s one more reason why now you see me is a pretty lousy film. if the movie focussed more on the magicians and less on the investigation, this movie could have been a whole lot better. i wanted to know more about the dave franco and isla fisher characters. apparently jessie eisenberg and fisher used to work together, which means there’s a story there about how and why they separated, only we never get to hear it. this movie is too focussed on being like every other film in the world, when it should have been looking for ways to be creative and unique.