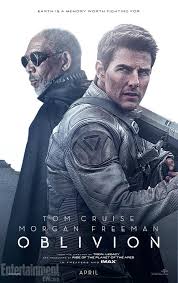 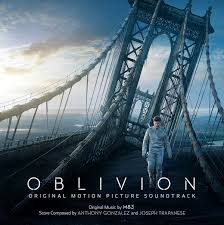 The technology ideas and atmosphere are cool, but the story is both predictable and also recycled parts from about five other movies.

This is a movie that looks fantastic, and has some pretty cool technology ideas about the future, but once the plot gets started it’s just a landfill of recycled parts. starting all the way at the beginning we’re looking at a combination of wall-e and total recall, and it doesn’t get any better. the ideas that actually are original aren’t handled well, to the point where they aren’t even made very clear. Now there are definitely things to like about this movie, such as the drones which come after humans and fly around attacking and shooting lasers. but nothing here feels very new. even the twists end up being familiar. maybe this movie was hoping to find people who haven’t seen moon, and maybe if it did, then some people would actually think these ideas were fresh, but the truth is, they aren’t really creative or new at all.

Oblivion is nothing special. That all really has to do with the way that this movie is told. There are definitely interesting ideas and twists Here, only they don’t feel like anything great because they are handled so poorly. For one thing, the movie starts out in a captivating way, and then slowly becomes more and more generic. As each new development unravels, this becomes about trying to figure out which movie you’ve seen this exact same thing in before, and that’s never a feeling you want to have when watching something new.

There are a lot of problems with this movie, but in the first thirty minutes or so it seems like something pretty cool. That’s because those first thirty minutes are all setup. We learn of the future and the current start of the earth and of what these drone repair technicians like Jack (Tom cruise) are doing. It’s an interesting scenario that got them to this place in history, and the building blocks for a good movie are definitely there.

The situation is that there was a giant war between humans and aliens (called Scavs) and the moon got destroyed. The humans won the war, but with the moon in rambles, the earth got hit by earthquakes and tsunamis, and all kinds of things that made living there impossible. Now, there is nobody left on earth. it is a barren wasteland, and all of humankind has evacuated to live in a space station hovering around in the atmosphere.

Jack is one of the only people alive who is allowed to go down to the earth. That’s because his job is to repair the drones who are carrying out missions on the surface. The drones are mining energy from the ocean water supply. when one of them breaks or malfunctions, jack is sent down to fix it. he doesn’t live in that giant station where all the humans are. instead, jack lives with a partner, on a sort of floating house, high above the earth, in the middle of space. This docking station where he lives is very cool, and it’s where we spend the first ten minutes of the movie, seeing how everything works.

for the next ten minutes, jack takes his cool looking white jet plane, with engines that look like giant bubbles, and brings it down to the earths surface. he now roams around looking for the drones that he needs to fix. at one point jack ejects a white motorcycle from his jet and then rides it across the wasteland, past old ocean liners that are stuck in the ground. the visuals here are spectacualr.

so far, this has been a combination of i am legend and wall-e. jack roaming around earth as the last man alive kind of thing, is right out of i am legend. and the whole idea that the earth has been destroyed, people who survived now live up in space, and yet workers still need to come down to earth to do jobs like mining, are from wall-e. when jack finds a plant as the only form of green life on earth and brings it back up into space as a present for his woman, the connections to wall-e couldn’t be any more obvious.

there are some cool ideas to the plot here, but they becomes incredibly predictably from some of the very first moments in the movie. we see jack having a dream where there is a woman in it who he recognizes. he wakes up and we hear his voice over narration saying that he doesn’t know why this woman looks so familiar. then we hear talk of a mandatory memory wipe that everyone had to get. at that point, the movie has just given away that jack used to know this woman in another life, before his memory was wiped. this is all within the first five minutes of the movie or so.

at about the halfway point of the film, the twists start to come out and get revealed, and none of them hits with the kind of impact that it should. first, there’s the idea that maybe this woman jack dreams of is good and that the woman who he is actually living with is bad (total recall.) then, jack actually comes across her and saves her, only to have the discovery of this woman lead him to a whole group of underground humans who are fighting the system. These guys are a combination of dennis leary’s group from demoliton man, and some of the rag tag goons of the book of eli. morgan freeman in particualr looks as if he stepped right out of that movie.

by the end of this movie, things get turned completely on their head as far as who the good guys are and who the bad guys are, and you definitely saw it coming from the beginning. especially with all of the rules that jack’s company put on him about not asking questions. even the biggest twist of the movie is right out of the sam rockwell film moon. the writer-director of this film says he came up with the idea before the movie moon, and that might be true, but that doesn’t make it any better.

part of the problem with this movie is that things are explained in the most complicated ways they can think of to make them sound more believable. the result is that a lot of it goes right past us, and even if we do understand it, there is no impact that it hits with. i’m talking about the idea of who the humans really are and who the aliens really are. the drone attacks are cool, and actually anything that has to do with technology and atmosphere is handled very well here. this is the same director who made tron: legacy, a few years ago, and just like that film, this one starts out great and then runs out of fuel pretty quickly.