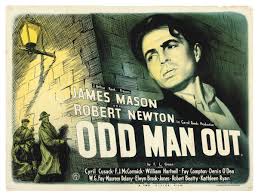 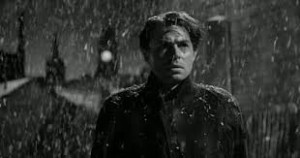 Odd Man Out is a movie that sounds like it would be intriguing. That’s because its initial premise is actually pretty good. The first fifteen minutes or so of this film develop a plot with a hook that is meant to keep viewers fascinated. And it does. Just not for too long. The movie works great all the way up to this major plot point and then after that somehow finds nowhere to go. It slowly becomes a disaster and a test in patience, all just to get to a lousy ending.

At the start of the film, a bunch of gangsters sit in a room planning a heist. The guy who will be leading it is john, a young man who sits by the window, so that he can see out over the street, and is very calm and collected in his tone. Johnny has been in prison for a while and he has just gotten out. This will be his first job since returning to his buddies. But some of them are concerned about him. One friend, in particular, pulls him aside after the others have left and tells john that maybe he’s not up to this and that some of them are uncertain of him. Johnny dismisses this friend and tells him when he wants advice, he’ll ask for it.

But as it happens, the friend and all of the others who doubted Johnny were right. During the robbery, they all make it out to the stairs with the getaway car at the bottom, waiting for them, but all of a sudden Johnny has a strange attack. When he was in the car, on the way to the robbery, Johnny started feeling a little dizzy and disoriented, but he went in anyway. Now, on the stairs and very close to the getaway car, he freezes up.

When a man from inside the bank comes out to try and stop them, he ends up wrestling with Johnny on the stairs and Johnny shoots him. The getaway car driver wants to leave, but Johnny is still hanging around on the stairs, and so they wait for him, even though they know the police are on the way. Finally Johnny gets in the car and they take off, speeding down the street, a bunch of guys packed into this tiny car. Only Johnny is not in so good, and when the car takes a sharp turn, Johnny goes flying out. This time the car leaves him and continues on, as Johnny lays there, helpless, in the street.

That is the premise and initial setup of the movie. So far it has been very good and exciting. Unfortunately, that will not continue. If Johnny somehow found a place to nurse himself back to health for a little while and then came after all of his old friends, taking them out one by one for leaving him behind, it would have been a better movie. That could have been a cool revenge film. But this movie is not that.

Instead, the rest of the movie has Johnny just going around from place to place, half-unconscious, trying to get healthy. He spends a whole big portion of the film down in a sewer / tunnel somewhere, which is where he crawls into after being left in the street. There’s not much going on there.

Johnny’s friends are concerned about him, and they wonder where he is and what happened to him. They have regrets about leaving him behind, and they all try to blame each other about that, but it doesn’t get them very far. The problem here is that it’s really just characters sitting around talking, with none of them actually doing anything.

None of them go out looking for Johnny. To make matters worse, there are no real police characters here to represent the other side of who might be looking for Johnny. The only main character that stands up here, in the second half of the movie, is Johnny’s girlfriend, who wants very much to find him, but doesn’t know where to begin.

She comes across characters who have seen Johnny, such as a homeless man with a bird, who uses his pet to make analogies about Johnny without spelling out who he is talking about. There’s also an artist who finds Johnny and tries to paint a portrait of him. None of this is all that interesting. Another character is the local priest who knew Johnny his whole life and now wants to have some last words with the man in case he is dying and wants to have a final confession. There are a lot of characters that talk about finding Johnny, but not much doing.

The movie had a good thing going for it at the start of the film, but then it becomes about just waiting around for the entire length of the film after that. There is no excitement or action left, and very little of anything happening at all. John’s friends get into trouble when someone calls the police on them, but that is all just a distraction from the main plot, which is supposed to be about Johnny. His storyline is as lost as he is and never really finds its way.