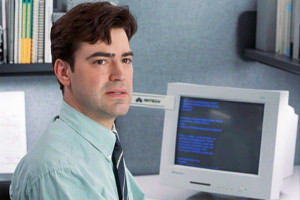 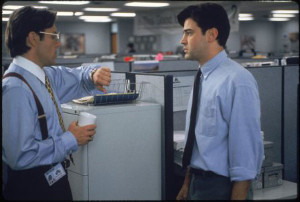 A funny movie with a pretty simple plot about the workplace and many annoyances that get swept under the rug when a character decides to just stop caring.

This is the movie that cashes in on a simple premise in order to find a very relatable situation for the audience. It’s the story of guy who isn’t so much miserable with his job as he is with the coworkers around him who make his life a living hell. And then one day, Peter Gibbons has a sort of epiphany that changes everything. The results are hilarious. The movie takes a strange turn at about the halfway point, turning innocent comedy into a newcomers at crime story, but that’s just the plot moving along, changing things up, and finding new avenues to explore. The movie works on multiple levels, including it’s side characters, like a guy named milton, who is sort of like the mascot of the film. More than anything else, it works because of the great humor.

Office Space is a very funny movie that became a cult classic in the years that followed its release. That’s because this film has such a simple, yet relatable premise. It’s the storyline about a guy who is miserable at work, surrounded by incompetent and annoying bosses, and decides to just not take it anymore. He doesn’t go on some revenge filled, massacre, but simply handles it by being peaceful, happy, and not paying those bosses any mind. This is the movie that combines great frustration with a very Zen solution, and it works on both levels.

At the start of the film, we are with peter gibbons (Ron Livingston), in his car, on his daily drive into work. Peter is stuck in traffic on a three-lane highway, and it’s bumper to bumper. We’ve all been there. And we’ve all been sitting in his shoes, watching the lane next to us start moving, and thinking we should move over and get in it. Well, this movie has some fun with that, as every time peter switches lanes, the lane he gets into stops, and the one he left starts moving. On top of that, there’s an old man with a walker who is walking on the curb next to him, and this guy ends up miles ahead of peter. What an opening.

That highway beginning is also used to introduce us to some of peter’s coworkers who are dealing with similar situations in their own cars. There’s nadir, an Indian man, who is even more frustrated with the traffic than peter. Unlike peter, which just sits there and rolls his eyes, this guy goes all out, cursing and yelling about the traffic. And then there’s Michael, who is content to sit in his car listening to loud rap music, but turning it down whenever a black person walks by.

From the highway, we move to peter’s office at a software company known as InfoTech. He sits at his cubicle listening to the annoying woman answer phones beside him, saying the same catchphrase in the exact same tone over and over again. That’s when his different bosses start coming over, one after another to talk to him about the same mistake that he forgot to do one time. Peter forgot to put a cover sheet on a TPS report and his bosses all want to make sure it won’t happen again. This includes them getting peter another copy of the memo about the cover sheets, despite him having a copyright there, in his hands.

One of these bosses in particular, stands out. This is Bill Lumbergh, a skinny man in suspenders (played by Gary Cole), who seems to have a coffee cup permanently attached to his hand. Lumbergh has a way of speaking that is more annoying than words. And everything he has to say is worse than the thing that came before it. This is a guy who doesn’t listen and just speaks. He has no consideration for his employees or what he is asking them to do. That includes asking peter to come in on both Saturday and Sunday, and asking a guy named Milton, who is the loser of the company, to constantly change his desk.

Peter goes to a restaurant called chichi’s with his friends, where he stares at the beautiful waitress, Joanna (Jennifer Anniston), that he has had a crush on for a while now. Back at home, he realizes that his boss is about to ask him to come in and work during the weekend, and so peter makes a plan to duck out early that Friday, and avoid his boss. Only it does’ work out so well, and lumbergh asks him about coming in both days of the weekend. Peter leaves work, goes to a hypnotherapist with his girlfriend, and the journey begins from there.

A funny thing happens while at the hypnotherapist. the man puts peter into a deep trance of total relaxation. It is so powerful, infect, that the man keels over dead, before he snaps his fingers for peter to wake up. That means that peter is now in this state of euphoria permanently. He drives home and can’t even hear his girlfriend talking right next to him. Then he sleeps in the next morning, despite lumbergh leaving more than ten messages on peter’s machine.

Peter decides to go to check’s by him this time and to ask Joanna out, once and for all. She responds well to this guy who just goes after what he wants and doesn’t hesitate to ask for it. The two of them start dating and peter skips work for the entire weekend. When he does show up again on Monday morning, it’s with a whole new kind of attitude. He grabs a drill off a construction worker and starts taking the place apart in a very serene kind of way. He’s not going at it with violence, but more like if something annoys him he just takes out the drill and undoes it. This include the door knob to the office which always shocks him, and the wall to the cubicle he sits at, which completely falls down and suddenly gives peter a nice window view.

Meanwhile, at work, there are some firings going on and two guys named bob that are brought in to get rid of people. They fall in love with peter and his “telling it like it is” attitude, and actually decide to give him a promotion. Peter doesn’t really want it though. He has come to realize that he’s not happy at this job, and decides along with his friends who have just been let go, to rip the place off. So starts the second half of the movie, where our characters attempt to become criminal masterminds and get in way over their heads.

With everything else this movie has going on, it is amazing that it finds time for a character named Milton (that loveable loser who keeps getting his desk moved), and is sort of the mascot of the movie. Milton is a side character, kind of like the squirrel is to the ice age animated films, in that he is probably the funniest character in the film. That is in large part due to the way we get only small doses of him at a time. It’s one more way that this movie shows it understands how to make comedy work. The storyline is pretty good, mainly because of how basic and relatable it is. This is definitely not creative stuff, but that’s kind of the point. And the humor is right there, delivering in every way that it should. There’s a reason why this movie has a cult following, and it is definitely well deserved.