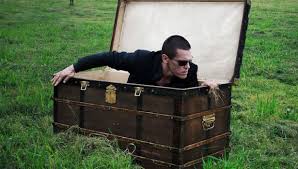 Just doesn’t have the same appeal as the original korean film, this one ends up being more like a lousy attempt at a mystery where the pieces just don’t fit together smoothly.

The new oldboy remake is not very good. the story is still there and effective, just like it was in the original korean film, but the pacing off this movie is all over the map. we barely meet the main character, joe, before he is kidnapped, and then he is being released before we feel like very much time has gone by at all. that’s when the mystery angle is supposed to start, but the clues this guy follows are pretty ridiculous. at one point the bad guy even hands him a clue, playing the same theme song on the phone over and over again until joe realizes it’s the alma matta to a prep school he went to and that the bad guy must have been someone else at that school. the look and style of the movie are great, but the pacing feels completely rushed and there are way too many scenes that don’t make sense. it was a good idea to remake this film, attempting to bring to life a great story, but those ideas needed to be handled much more carefully.

There was something special about the Korean movie Oldboy that became the most popular Korean movie of all time. it was a combination of storytelling and style. The creative plot had a man being held as a prisoner by an unknown kidnapper for two decades. Then, after the man finally got released, his kidnapper tormented him, this time with riddles about both the reasons behind the kidnapping.

The Spike Lee-directed, American remake of Oldboy tries to recapture these things, but doesn’t really do the best job. You can’t blame lee for trying. the storyline is still unique, and in a time when movie after movie feels exactly the same, why not strive for something that most american audiences haven’t seen before? the problem is, it still needs to be handled right. What works on paper doesn’t always translate to film.

There are lots of reasons why this movie doesn’t work. First off, we spend very little time with the main character, joe doucett, before he gets locked up. we get two or three quick scenes of him being a drunk jerk to people and then stumbling outside of a bar, and landing on the sidewalk. there’s a reason why most movies don’t start out with the problem, but instead introduce us to the character in his regular life. it’s important for us to get to know the character a little and start to sympathize with him. this movie throws that reasoning right out the window in an attempt to not waste any time, and after about three quick scenes or so, joe is kidnapped and wakes up in a strange room.

the movie only keeps joe in this room for a small amount of time. it’s supposed to be twenty years of course, but it sure doesn’t feel that way in this film. it feels like only about ten minutes of the movies running time. this is a problem because the room situation is the big appeal of making this movie. that and a few surprises which will pop up and grab our attention at the end. but as far as the room goes, it isn’t given the right kind of treatment and attneiton. in this oldboy remake, everything feels kind of rushed, including the time that he spends in this prison.

then one day, joe gets out. he wakes up in a trunk in a field with not a person or building in sight. joe comes across a man with a strange umbrella. there was a woman carrying this same umbrella when joe stepped out of the trunk. he attacks the man and ends up befriending a nurse named marie sebastian, (played by rising star elizabeth olsen). like everything else in this movie, the relationship between joe and marie feels rushed. When joe falls unconcious outside the bar, the bartender just happens to find marie’s card, and she just happens to show up, and the bad guy just happens to be there to see that and kidnap her too, and throw her into the mix.

before we meet the kidnapper, joe starts putting together clues. if the clues end up being interesting and joe gets the chance to play detective, than this can actually end up being a fun movie, or at least portion of the movie. unfortunately the clues are limited and simple. joe follows the take-out delivery guy who delivered to the prison when he was locked away. this leads him to the location of the prison where he tortures samuel l. jackson and goes on a killing spree, fighting all of the guards. there’s a great action scene here with the use of slow motion and a hammer. but it’s the only action scene in the movie. too bad, because there was definite style and promise there. but there’s also the fact that it’s too unbelievable to think that joe went from being a drunk to a martial arts master. we saw him do some push ups and get into shape, but here he fights like he’s a superhero.

following joe’s raid of the prison facility, the man who kidnapped him suddenly decides to announce himself. it’s like taking the surprise that most movies end with, and throwing it into the middle. i suppose that should be a good thing, doing something different than what we’re used to, especially if there’s another surprise all geared up for the ending, like there is here. still, having the villain present himself in such a vulnerable way in the middle takes a lot of the mystery out of the film. this movie wants us to believe that all the mystery is still there, like figuring out exactly who this guy is and why he framed joe for his wife’s murder, kidnapped him, and then let him go free. the truth is, the real mystery is simply who the villain is, and once that’s revealed, there ins’t much else to be excited about.

the mystery does continue with our two leads (joe and marie) putting together clues about joe’s past. this includes going to his old college and trying to dig into his memories to see if he wronged anyone. at a certain point this all gets pretty tiring. they go to the old head mistresses house and get no information out of her at all (although joe does go and sneak a peak at an old year book, which he just happens to be instantly spot.) the movie is so clunky it has marie just show up at the headmistresses door without even introducing herself. sam jackson’s character is about to torture joe in another scene when suddenly he gets bought off. this is the guy who just cut his neck apart, and jackson’s gonna just walk away from him? not even a gunshot to the leg or hand on his way out?

we are supposed to care when secrets about joe’s past from the college days gets revealed, but if this is the answer to the mystery then it’s like the movie wasn’t playing fair. how can we, the audience, have possibly guessed that there was this college scandal from joe’s past? a good mystery, just like a magic trick, has all the pieces laid for you to see in plain view and be able to figure out. still, despite all these flaws, there are definitely some things to appreciate about this film. first off is the look of movie. the colors are great, and the images pop off the screen like no spike lee movie ever has before. another thing is the action. it might be limited to that one hammer scene, but boy does it deliver. the story translates well in order to work for a modern day film, and there was definitely some real potential here. unfortunately more often than not, the pieces don’t add up or gel together.

the oldboy story does still hold up. it’s not nearly as crazy as it was some ten years ago when the korean version was considered revolutionary and unique, but the problems are not with the plot. instead, they are in the pacing. everything happens quickly here, as if the movie is trying to cover a lot of ground and struggling to do so effectively. the end surprise is great, of course, but it would have been nice if the mystery that led up to it had some merit as well. spike lee is not a mystery filmmaker. he tried it once before with inside man, and that happened to be a terrific picture, but with this oldboy remake, clearly he has bitten off more than he could chew. it seems like he’s trying to fit so much in that he has to rush every bit of it. that’s no way to make a movie.