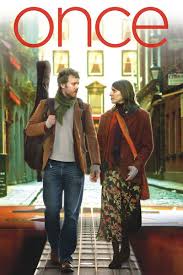 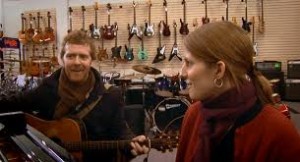 A pretty creative and fun movie about a friendship formed through music with the potential for romance constantly in the air.

Once is a movie about a musician and a potential romance, and while both of those subjects might seem cliched, this movie is anything but. for one thing, the movie acts more like a musical than like a typical movie about a struggling songwriter. he plays his songs at full length during the film and often takes us into understanding how the songs come about. and as far as the romance, this movie establishes it’s own rules and defies the staples of the genre every step of the way.

the characters are simply named guy and girl, which is a little pretentious and not nearly as cool as the movie thinks it is. still it is a miner setup, and there are a lot of other great things going on, making the corny character names easily forgettable. The movie opens with a very funny scene of guy playing his guitar in the street and dealing with someone who tries to rob him, stealing his guitar case full of money and running away. what makes the scene so funny is that guy sees it coming and even talks to the robber while he’s playing the guitar, saying, “don’t you do it.” the robber is hanging around the case, pretending to tie his shoe and do all sorts of other stuff and guy knows exactly what’s coming.

not long after that scene, we meet girl. she is charming in her poor english and ways she often does not follow exactly what guy is saying. when he asks her what is wrong with her hoover vacuum cleaner, for example, her response is simply, “it’s fucked.” part of it is the broken english and then another part is that these characters are irish and so they tend to speak in a slightly different way, saying things like “brilliant,” all the time, or ending sentences by asking, “Yeah?”

the girl talks to the guy a little bit about the song he’s singing, wailing away into the street one night, and who it was written for. she asks him if he’s still in love with the girl and he’s blown away by how up front she is. she tells him about her broken hoover and he offers to fix it if she brings it by the next day. and so a very interesting and unusual relationship begins.

the next day, the girl does bring the vacuum cleaner by, and the two of them go off together for a coffee break. that leads the girl to bring the guy into a music store where the owner lets her come in some afternoons and play around on one of the pianos in the back room. he lets the two of them go in this time, and they sit down at the piano and play a few songs.

at first it’s her song and she’s pretty good, but Once she asks him to sing one of his own, we begin the greatest number of the movie. the song is called “falling slowly,” and there are a number of reasons why the scene is so special and memorable. the first is the way guy explains the melody of the song to her before even beginning to play it, singing just beats for her without words, so that she can hear the rhythm. and then there’s the camerawork and the shots we get while they are singing. the camera either moves around and into their circle or falls back and catches both of them in the same shot, eyes closed, singing away. it’s also a great song.

After the two of them share that spectacular moment at the store (it’s not only the best song of the movie, it’s also the best scene of the movie,) they go over to his place to meet his father, drop off the vacuum cleaner and just hang out. that’s when he asks her to stay the night, and their relationship gets a rude awakening. she is not only uninterested, she gets mad at his propositioning her. maybe it’s a culture difference and her not realizing how everything that happened before was leading up to that, especially with ending up together in his bedroom. or maybe it’s more like he hasn’t even kissed her yet and all of a sudden he’s talking about sex, treating her like a slut. either way, she gets made and storms out.

the guy finds her in the street again and apologizes and they become friends from there. the first real act of the movie is now over, and unfortunately the intensity of the film dies down a great amount. the second act is all about them making an album together along with some other local musicians. it takes a while for things to get going and happens to be a pretty slow course of events. first he asks her to help him figure out how a song should go. then they need to get new clothes just to go into a bank and ask for a loan. then they go to the bank. it’s a lengthy means to an end, but eventually the make it into the studio and record their album.

the final act is about how they are both still in love with someone else and how they move on with their lives to pursue these former relationships that they have never gotten over. it’s different and pretty cool in the way no that not only does it not work out, but also how it never even got started. the movie feels like a romantic comedy, but there really is no romance. it’s all an illusion. they might like each other and express that through music, but there is no physical relationship between them at all, and that is pretty unique.

Once is a good movie that would have been great if not for it’s very slow and very lengthy second act. the title refers to this one time in their lives when they knew each other and developed a friendship through music. it’s a time they will always remember. especially after a certain gesture the guy does for her at the end that kind of cements the whole thing with some permanence. it’s got a very cool relationship at the heart of the movie and some fantastic song numbers to propel it along. many people call this movie a musical that is unlike any other. and i suppose it is. the characters don’t break out into song and speak to each other through song at random times like they tend to do in most musicals, but there are certainly a lot of music numbers none the less. in those usual musicals, the characters are supposed to not notice that they are singing, and to treat the songs like dialogue as if someone is speaking to them. Once takes a more serious approach and tells a movie that is about the music and how it brings two people together. making a movie that doesn’t hide from the music, but embraces it as a part of the plot really helps this movie become it’s own creative picture.