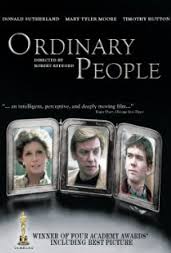 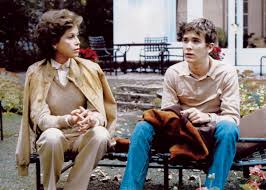 A pretty interesting psychological movie about a family in trouble after the tragic death of one of their children has left a hole in all of their lives.

Ordinary People are a very fascinating movie. it’s a drama that is almost more of a mystery. that’s because the movie hides it’s cards and doesn’t let you know exactly what’s going on for a while. we see quick flash backs to a tragedy early on, but have no idea what it was about or what the ramifications from it were. and instead of getting answers about that, we are quickly thrown into the lives of three people. those people are Calvin (Donald Sutherland), Beth (Mary Tyler Moore), and their son Conrad (a young Timothy Hutton.)

these are people who have problems, and we get that sense pretty early on, even if we’re not quite able to put our finger on it yet. there’s a scene towards the beginning of the movie where Beth makes breakfast for his husband and son. When Conrad says he’s not hungry, Beth grabs the plate and shoves the french toast right down the garbage chute. It’s such an extreme reaction that Calvin responds with some shock at why she did it. And while it definitely says something, what’s so cool about this move is that we can’t be sure of exactly what it means. Not yet, anyway.

As we start to learn about the characters, we learn that Conrad had tried to kill himself. this action had him wind up in a mental hospital for a period of time. when he finally left it, he kind of missed the hospital. he had real friends there. in school, Conrad also has friends, only these aren’t the kinds of people that he feels he can talk to. His friends are guys on the swim team with him who try to be nice to him, but don’t know how to cope with Conrad’s strange behavior. and Conrad ends up snapping at them and pushing them away.

Conrad also quits the swim team. he’s very depressed all of a sudden and he’s not sure of exactly why. Maybe it’s because of his living situation at home. his father is the gentle giant who is understanding of Conrad and tries to comfort his son. His mother, on the other hand, looks at Conrad as if the boy is trying to wreck her marriage. She treats Conrad as if she was his stepmother.

we learn later on that part of the reason for this is because she had such a close relationship with Conrad’s older brother, Buck. And we also learn of the tragedy that took buck’s life. he and Conrad were out at sea one day during a storm and Buck was killed. While it is never said, it seems pretty obvious that Beth wishes it was Conrad who was lost at sea that day and even blames Conrad for Buck’s death. at the very least, when she sees Conrad, it brings back memories of how buck died and she is not able to get past that.

while this movie is definitely deep on certain levels, it never quite explains all of them. There is a psychiatrist character that Conrad goes and talks to again and again throughout the movie, and that’s usually a sign of something interesting. The Robin William’s character, in Good Will Hunting, for example, absolutely made that movie. only here, in Ordinary People, not a whole lot comes out of Conrad’s sessions with Dr. Berger (Judd Hirsch).

What worked about Good Will Hunting and the sessions with Robin Williams, was that each session was different and in each one of them more intimacy and profound understanding and analysis was revealed. we ended up learned a lot about both will and also Sean (Williams) from those scenes. But here, in Ordinary People, we don’t learn a thing about Berger. The best we get from it is a little more of an understanding about the mom. and that mostly comes out of a visit of Berger’s by Calvin, who goes in to try to shed light on some things. Calvin is the one who divulges the relationship between Beth and buck.

this is definitely a dramatic movie and an emotional one. it’s not necessarily a tearjerker or anything like that, but it certainly keeps your interest and attention and plays to your feelings. we feel bad for Conrad and can tell that he blames himself for what happened to buck. and we also realize that all Beth seems to care about is the way others perceive her.

when Conrad quits the swim team, Beth is furious with him. only she’s not angry that he quit the team, she’s angry that he didn’t tell them. she’s angry that she had to find out from one of her friends and that she looked like a fool in front of her friend for not knowing. I’ve met people who are superficial like this to the point where they ruin other people’s lives because they care about all the wrong things. this movie captures that kind of persona pretty well.

There are some serious dramatic beats to this movie, and that also helps keep us off guard and fascinated by the events. the performances are all pretty great here, and this is not easy material. Ordinary People was the first movie directed by Robert Redford, and it won the best picture of the year, back in 1980. I’m not sure that it deserved that high of an honor, especially when you consider that it beat out raging bull, but it is certainly a well-made film. Redford isn’t the greatest director. His other movies include A River Runs Through It, Quiz Show, and the legend of vager bance. Ordinary People are certainly his best. It definitely moves a little slow at times, but once it gets going, this movie really leads you along and keeps your focus. the second half of the film is far better than the first half, and I suppose that’s the way it should be, with the dramatic tension increasing as the film goes on. This movie has a pretty interesting story to tell and does a nice job at telling it.