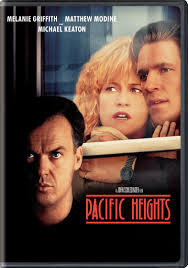 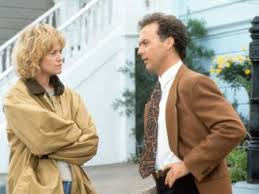 A pretty cool thriller, the first half of this movie, about the apartment, is truly unique, but then the second half starts to get into the usual familiar territory.

Pacific Heights is a pretty solid film about a psycho neighbor and the people who have to deal with him. Now, on the one hand, we’ve seen many movies like this before, where a stranger shows up to put the lives of our protagonists into immediate danger. But here things are pretty different. This neighbor isn’t a violent threat, and instead, he has a plan. The couple in question buys an apartment, rents out a space as a studio, and welcomes this man into their lives. Only he doesn’t pay. And then he makes things worse for them little by little. The whole thing centers around the apartment and the movie is smart in the way it introduces us not only to the layout of the building, but also to all of the other tenants. Most of this film works. Then, towards the end, it starts to get away from the apartment and dive into familiar territory with our heroes playing detective. If not for the last act of the movie, this whole thing would have been great. As it is, we have a pretty thrilling picture that just lacks in its ending.

Pacific Heights is an interesting and unusual thriller. It’s a movie about a stranger who turns out to be a psycho, and in that regard it’s like every other film in that genre. Only there’s something new and different here. The stranger is a tennant who rents from a couple. This movie is about real estate and trying to make a profit and how if not careful  who you rent to, things can turn on you like a dime.

So we’ve all seen these movies where the stranger is not only scary and out of his mind, but is also violent and dangerous (Single White Female, for example). Well, in this movie, it seems like that stranger is going out of his way to not be the violent one. He’s dark and mysterious and creepy as hell, but he lets the couple be the ones to show violence and that’s all part of his game.

At the start of the movie, we are with this couple, Drake and Patty (Matthew Modine and Melanie Griffith), as they buy and renovate a house at a prime location in the San Francisico hills. The house is big enough to handle three different apartments. There’s the place where they will stay, on the second floor. Then there’s a one bedroom, down the hallway and the first floor. And finally, there’s  studio apartment right by the front door, when you walk in. This movie deserves a lot of credit for really making the layout of the building clear, so that we practically feel like we’ve been in there ourselves, walking through those halls, and know where everything is.

Drake and Patty start renting the two apartments out. They do credit checks and have potential buyers fill out applications. They rent the one bedroom apartment to a nice Asian couple. Then with the studio apartment, they meet this guy Carter Hayes. He comes up one morning and introduces himself to Drake saying that he met Patty last week and she told him to come by and take a look at the place. Drake shows him around, only when he mentions this to Patty later on that night, she has no recollection of Carter Hayes and says the man is lying about meeting her.

Carter signs the application and the very next day he comes into the building, finds the door to the studio apartment opened, and begins moving his things in. At this point Drake has not gotten a security deposit or the first months rent. In fact, he has barely touched based with Carter’s references. Just one woman who answered the phone and vouched for him. But Carter hasn’t paid a cent for the place, and that is not what he and Drake agreed to. Drake goes downstairs to have a word wiht Carter, only the man is not there.

In fact, the next couple of times when Drake goes by, Carter isn’t around. Instead, there’s another mysterious man living there who keeps answering the door. He says that Carter is out of town. At first Drake thinks that maybe there’s a mixup with the bank, but then he realizes what’s going on here. Carter isn’t planning on paying for the apartment at all. The couple needs the rent from that place in order to keep their mortgage and keep themselves afloat. It gets so bad that Drake even decides to turn off the electricity and hot water going into Carter’s apartment. That’s when things start escalating to the next level.

First, Drake calls the police on Carter. When they arrive, he is sure that they will be in his corner, only he learns quickly that there are laws which protect tenants once a contract has been signed and that by turning off the utilities to Carter’s apartment, he has broken these laws and Carter can sue him. Next, Carter starts breeding roaches and putting them into the pipes so that they go into the apartment next door. For a while, it seems strange that he is doing this. What’s his end game? Sure, he gets the Chinese couple to move out, but how does this help him? As the movie goes on, it all starts to make sense.

Carter’s end game is to get Drake to lose his temper. If Drake crosses certain lines than Carter can sue the man for everything he’s got and that includes the apartment. Realizing this brings to mind the start of the film, when Carter is lying in bed with a woman and two men bust in and beat him up. In her search to make sense of all this, Patty goes to see that woman and learns that Carter and the woman pressed charges against those men, won their lawsuit, and are now the owners of that building.

Everything is creepy and exciting until we start to get near the climax. Things have definitely built up to this point, with Drake even having to move out and then getting himself shot. But when Patty starts taking things into her own hands, the movie goes a little too far. She basically becomes like a spy, sneaking into hotel rooms and doing all kinds of clever things to Carter’s credit. It’s a bit unbelievable and out of place. These are the kinds of scenes that feel like every other movie, whereas the story really did feel pretty fresh until that point.

Pacific Heights is a spooky movie with a really interesting villain. Michael Keaton plays Carter just perfectly, and often that means less is more. He doesn’t have huge conversations with the couple, but instead is the guy who will sit in his car in the dark, smoking a cigarette and watching Patty walk around without her ever knowing that he’s in there. I really liked the use of Carter’s friend, who was about equally creepy to him, only in very different ways. The movie is good and creative, but the final act just goes too far into familiar territory. It needed to continue on its path of origninality and avoid falling into the same traps that so many other films have. The usual ending is easy and predictable. It is the creative ending that really intrigues. This movie doesn’t have that.