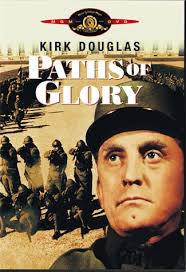 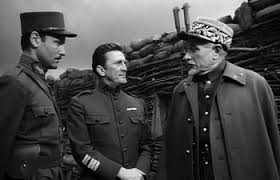 A pretty creative and powerful movie, especially in it’s second half when everything really comes together.

Paths Of Glory is a pretty intense kubrick movie, even if it takes a while to get that way. This is a film that really rewards patience. The first quarter is basically composed of short stories that seemingly don’t have to do with the rest of the film. but then the movie goes on and we learn how each of those stories did, actually, relate to the big picture, single plotline. Starting with the men being accused of cowardice and put on trial, this movie suddenly takes on new life and becomes incredibly intense. That’s certainly where Kirk Douglas starts getting his moments to shine, playing the man who will represent these soldiers as their lawyer. The movie is smart and creative, and I really like the way it goes past what one would expect to be the climax, in order to give us even more of the story. Stanley Kubrick does a nice job with this one, never shying away from anything, to tell us this story in all it’s gritty detail.

Paths of Glory is a cool Stanley Kubrick movie. It’s a World War I movie that really takes us into the trenches to see what the war was like for the soldiers. Aside from that, it also takes us behind the scenes, to some of the meetings of the generals and trials of the soldiers who are accused of wrongdoing. It has a lot going on, and a very interesting storyline, but it just takes a little too long to get going.

At the start of the movie, we meet General Mireau, a man who is told he will lead a comman in taking the ant hill, an area that is heavily guarded by German soldiers. Mireau says that the mission is impossible, but when told that there will be a promotion for him involved, if he goes through with it, he agrees. Then he delegates another man, Colonel Dax, (Kirk Douglas), to be the one who really leads the soldiers on the mission.

Now we get the night before the mission, as three soldiers are out on the battle ground, and start to get scared. One of their men goes out, and they assume he is dead and not coming back. One of these soldiers throws a grenade out and then they all retreat. On their way, they find the body of their soldier friend, and notice that he was killed by the grenade and not by the Germans.

There are a lot of little pieces here, and small stories, and none of them seem to go together just yet. When the men go out to take the ant-hill, a number of them refuse to go, knowing full well that it is a suicide mission and that they will not be returning home. At this point, General Mireau gets furious and orders another bunker of men to fire at the soldiers who won’t go out on the battlefield. The order is never carried out, as the soldiers in the other bunker refuse to fire on their own men. This becomes another small story, that doesn’t seem to go with the others.

And then everything starts to come together. It’s at least a quarter way into the movie, but now we get one consistent plot with the other storylines from earlier factoring in. this plot involves general mireau putting the men on trial who refused to go out and fight. he wants them executed for cowardice. at first he wants one hundred men tried, but then he is convinced to settle for only three.

the squad commanders of each unit pick one man to be in that group of three. in one of the cases, it’s the guy who saw his squad commander throw that grenade earlier, which killed their friend. the squad commander is putting this man on trial, hoping if he is killed, it will shut him up before he gets to speak out about what happened. so three men are put on trial and it turns out to be three men who really did go to the anthill. they aren’t being tried for not going, they are being tried for retreating and going back, when all around them men were dying. in one of the men’s cases, he didn’t even retreat. he was knocked unconcious during the whole thing, while he was out in the battlefield.

it is Col. Dax (douglas) who decides to represent the three men on trial. He thinks the whole thing is completely ridiculous, and that these men did nothing wrong. dax was a lawyer before the war, and he feels very passionately about this case. he goes to work defending them, calling each man up as a witness to tell his story. the prosecution does not call any witnesses of its own, and there is no court reporter taking anything down. aside from that, the charge against these men is never formerly said, and most of the avenues that dax tries to pursue in defending them are turned down by the judge, who claims they are irrelevant to this case.

The men are found guilty and put before a firing squad. i really like the way that kubrick did not shy away from this scene or from the actual moment when the men are fired upon and killed. most filmmakers would have moved the camera away from them in that moment, letting us just listen to the sounds of the bullets. with kubrick, he knows we want to see it, and so he doesn’t hesitate to show it to us.

this firing squad scene may seem like the climax (it is the end result of the trial), but the movie has much more up its sleeve. dax is not satisfied with how things turned out, and when new information comes to light, he brings charges against general mireau. the way that these charges are handled by the highest commanding officer, are just great. he wants to be neautral, and in favor of both dax and mireau, and so he tries to do something to appease both of them, only dax isn’t buying it. the movie builds up in intensity, and gives us a new villain in this commanding officer, that we were not expecting.

Paths Of Glory is a very smart and creative movie. i wish the earlier scenes had a stronger connection in the first half of the movie, and that it was easier to tell what the connection was at that time. i suppose this movie rewards the patient, who can trust that a connection will be coming, and who wait calmly for that answer. the second half is where things really come together and where the movie takes off to become something great. i love the way the storyline unfolds in the second half, to give us more than just the trial and sentence, but also a new revelation after all of that is over. it’s a very cool movie.