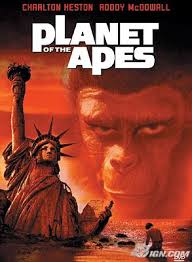 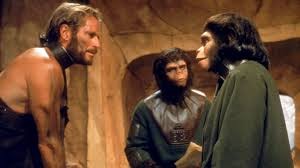 A pretty clever movie that gets creative with it’s ideas about evolution and what it might lead to in the future.

A very cool movie about astronaughts in the future who land on another planet, go out and explore it, and end up becoming prisoners to a group of apes. Charlton Heston stars as Taylor, the astronaught who we end up staying with as the apes use him as a test subject to study and try to understand. the world that this movie has created is pretty neat, and the story brings our character into all different kinds of situations. The movie builds in momentum as it goes on, leading Taylor first to a prison and then to a trial. there are some fantastic ideas here, and the movie ends up being a creative take on the future.

Planet Of The Apes, the original film, is far better than the Mark Wahlberg version, or any other recent attempt of making movie about characters landing on another planet. These days, it’s one of the most popular stories around, from the Tom Cruise movie Oblivion, to the Will Smith film After Earth. But planet of the apes was one of the originals, and as such, it had to work to get our attention. It couldn’t rely on effects, the way that movies of today do, and had to concentrate its energy on storytelling instead.

I really like that the film starts with our astronauts in outer space, sleeping in a spaceship, unconscious for a couple hundred years. I like the way the movie slowly wakes these characters up and has them find that the woman of their crew has turned into a skeleton. They crash land into a lake on a new planet and get out to explore. Even now, the movie takes its time before getting to the apes.

The first quarter or so of the film is devoted to us getting to know the characters. We stay with them as they explore the planet, looking for signs of life, and mostly finding just barren wasteland. When they do find a little plant going, the boys nearly freak out with happiness. They keep on walking to find a bunch of weird looking scarecrows setup on top of a mountain. Each new discovery is like a clue to the mystery. Yes, life can grow on this planet, and yes, there is something out there that made these scarecrows.

Aside from watching the character explore, during that first quarter of the movie, we also get to know them a little. They have arguments and reveal information about each other’s pasts, like how the Charlton Heston character, Taylor, is arrogant and felt like he needed to get away from earth. he felt disappointed with mankind and needed to believe that there was something else out there. something greater than humans.

After we learn a little more about the characters, we watch them find a lake and go for a dip. when their clothes are stolen, the guys realize that there are other people on earth too. only they seem very primitive and don’t speak any English, and they accidentally lead our boys right into a trap. that trap is an attack from the apes. the apes show up on horses throwing nets over the humans and capturing. Taylor is one of the ones caught and put into a cage. he is separated from the other two members of his crew.

the next part of the movie becomes about Taylor’s life as a prisoner of the apes. there is a female ape, named Zira, who thinks there is something special about him. she puts him in with an attractive human woman who as also been taken prisoner, and tries to study him. she calls taylor bright eyes, and believes that there might be more to him than it seems. the problem is that Taylor has been shot by a dart in the throat, and has lost his voice. since he can’t speak, it becomes very hard for him to communicate.

the second part of the movie is really all about Taylor finding a way to break ground with these apes and prove to them that he can talk. the apes treat him like an animal and consider all humans to be dirty creatures, but Taylor is out to prove them wrong. Apes don’t believe that humans are capable of speaking or of thinking very much. Taylor wants to prove that humans really are a higher life-form. At one point, he escapes and tries to hide in a museum, and the museum is all filled with displays of humans.

Taylor gets caught during this escape, and it’s while he is in a net that he finds his voice and shouts out that so famous line, “get your hands off me, you damn dirty ape.” he can talk! This event sparks the direction of the rest of the movie. taylor is suddenly put on trial. that’s the third section of the movie. he is defended by zaira and her husband, Cornelius. they believe he means no harm and should be treated as a guest who the apes can learn from.

there are other characters who think differently. Dr. Zaius, in particular, believes that Taylor is lying about who he is and where he comes from. he believes that Taylor comes from another part of this planet, and is part of a much bigger group of humans that is secretly planning to attack the apes. dr. Zaius thinks that Taylor is trying to cover for those humans so that the apes won’t find them. when taylor tells the story of how he is from another planet, the apes think he is clearly being ridiculous and making it all up.

the final part of the movie involves taylor leaving the prison and dealing with the apes back in the area where the film began. it gets exciting in the climax, but still some of the best moments in this movie came in and around the trial, with Taylor representing himself, at times, trying to argue his case. Planet of the Apes is a great movie because it is constantly coming up with new ideas. there is a cool twist ending, and even before that a neat moment where Taylor and the apes find an area that holds a lot of secrets. This movie is creative and interesting at all times. I love the moment where Taylor does run into one of his old crew members again and is severely disturbed and horrified by what he finds. and the ideas about how apes could have evolved once again from humans, (how evolution could have been reversed), are terrific. This movie does get slow at times, but for the most part it is pretty great.