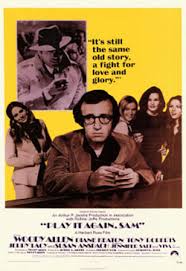 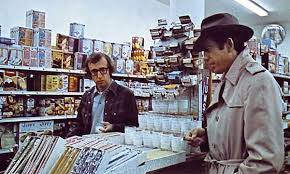 A funny movie about an awkward and single guy who goes on dates and takes his influences from the movie Casablanca.

A simple, yet enjoyable film about a single guy who is trying to date and running into all sorts of problems. It’s a premise that has been done before, but in the hands of mastermind Woody Allen, this actually feels like something new. That’s because allen has precision with comic timing and fantastic wit. He also has the smarts to know his story needs to change up in the second half and become something kind of new in order to keep us interested. This movie does.

Play It Again Sam is a Woody Allen movie that wasn’t directed by Allen. He wrote the movie, and he’s the star, and the movie certainly has his level of humor, but it’s a little darker than his usual film. That’s okay though, because it’s very funny, and really that is all that counts. The movie is about a single guy, named Allan, whose wife has just left him for another man.

Allen plays the character perfectly with all the neuroticism and nervous ticks that always make for a great Woody Allen character. Allan is a film critic who is obsessed with Casablanca, and he imagines that Humphrey Bogart is there, beside him in his living room, giving him advice. When he wants to be cool, Allan thinks about what Bogie would do in the situation and then does his best to imitate that. More often than not, it doesn’t work.

Allan has two very close friends. These are Linda and Dick, and they are a couple. Diane Keaton who is as young here as I’ve ever seen her plays Linda. This movie was made the same year as The Godfather, and Keaton was in both, but here she is so young looking that at first you don’t even recognize that it’s her. Tony Roberts plays dick, a businessman who is constantly on the phone and telling people the different phone numbers of where he will be at each minute of the day. He doesn’t realize how ridiculous all of this sounds.

Linda and Dick are a couple, and they have known Allan for a while. They try to help him get out of his funk and depression by taking him out and setting up dates for him. Only Allan is a nervous wreck. Even when it’s just Linda and Dick in Allan’s apartment, and Allan is in the bathroom with the medicine cabinet open, the sound of Dick’s voice, calling to him, makes Allan drop every bottle in the cabinet. And the way this is filmed, with all of them raining down on him and his hands over his head to take cover, is very funny.

Dick and Jane take Allan dancing, and that doesn’t go so well. His approach is to just go up to a girl, start dancing with her, and then whisper things into her ear. At first, all he can think to whisper are the steps he is doing to keep the beat, saying, “one, two, one, and two.” Linda tells him he’s got to say more, and Allan goes back to the same woman this time saying, “three, four, three four.” when Allan finally does get up the nerve to really talk to the girl and ask her to dance, she completely rejects him and pushes him away.

Since the meeting strangers randomly thing isn’t working, Dick and Jane each vow to set Allan up with a friend of theirs. Jane takes a crack at it first. Allan is in the room when she calls her friend to tell her about Allan, and he can’t even handle listening to the phone call. Instead, he makes loud siren noises to try to block out the phone conversation. It is very bizarre, but also kind of funny.

The actual date doesn’t go any better. They all start out at Allan’s house, and just watching him set the place up before the girl arrives, explaining his strategy to Jane for placing things where they are, you can tell it won’t go very well. When the girl does arrive, Allan starts knocking things over, left and right. And yet somehow he thinks it’s going well, and decides to walk her to her door at the end of the evening. He gets a rude awakening when he pulls out his Bogart impersonation as the girl is trying to get away.

The situation with another girl, who is Dick’s friend doesn’t go any better. Allan goes to meet her with Dick while she is at an outdoor restaurant with a bunch of friends. As Allan holds out his hand for a shake, he ends up sticking his hand right in the salad bowl they are all eating from. Then Allan tries to cover it, saying the salad needed some tossing, and actually standing there, tossing its contents around by hand.

If the first half of the movie was all about Allan going out with different women or attempting to find one who would give him the time of day, then the second half is incredibly different. Allan does find a woman and the situation becomes a bit of a scandal. You can see it coming for a while, ahead of when things actually do unfold, but even still, this twist of sorts definitely spins the story into a new and more exciting direction, which is exactly what you need as a movie continues on.

Play It Again Sam is fun. This is far from Woody Allen’s best, but it definitely has his flavor and feel and showcases how much talent is at play. After all, this is a pretty basic and simple film, involving a very straightforward and direct story. The fact that Allen finds so much humor in such a generic situation is terrific. The movie isn’t hilarious or anything, but there are definitely some good laughs. And the way that the story changes drastically from one half to the next really works well here, keeping our attention as things build up and characters find themselves in over their heads. There’s even a cool bookmarking situation at the beginning and end that references Casablanca. This is a good, fun movie with a nice amount of humor.