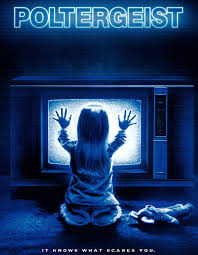 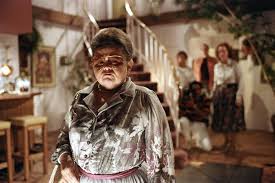 A pretty cool movie with some great ideas that gets better and better as it goes on.

This is a fun, horrifying movie. It’s the kind of thing sam raimi might have made with coffins bursting through the ground and skeletons popping out of them. All of this works because of the buildup, which tells a nicely paced story about a family in peril. The first twenty minutes or so are too slow, but after that, everything works out just right, including an early sequence where the mother, diane, has fun with the ghost, experimenting with moving objects on her kitchen floor. There are some amazing moments on hand here, which come later on, including the rescuing of a little girl by opening up a tunnel into another dimension. This is a very entertaining film

Poltergeist is a different take on the ghost – spirit – other world kind of movie. it’s different because, among other things, it clearly explains that this is not a haunting and exactly what the difference is between a haunting and a poltergeist. the truth is, the differences that are explained here all sound like a bunch of nonsense, but even still, the movie deserves credit for trying and for using this to differentiate itself from other films that came before it. this is a film that strives to be creative and original, and the effort is definitely there, every step of the way.

Poltergeist is about a family of five that lives in a nice big house where the father, Steve, (played by Craig t. nelson) is in the real-estate business. this becomes significant later on in the film, when he learns the history behind his house. the parents have three children. two are young, and the third one is a teenage girl. One night while everyone is asleep, the little girl, carols Anne, is found sitting in front of a television set with static coming from the screen, talking to it. she ends up being so loud that everyone in the house wakes up and comes downstairs. only nobody thinks that much of it and they all go back to sleep.

the next day is pretty much more of the same. Carol Anne talks to the television set, and everyone more or less ignores her. this is a slow start to the movie. At one point in the middle of the night, a strange mist or electric bolt shoots out of the TV and strikes the wall above the bed where the parents are asleep. nobody notices and they all continue sleeping. luckily, things are about to pick up.

The next day, the mother, Diane, notices something interesting. She’s in the kitchen with carol Anne and tells her daughter to push the chairs in when she walks away from the table. No sooner does Diane look away, and then does every chair somehow get stacked up on the table so that when Diane walks back into the room, she nearly jumps out of her skin. It’s a great moment of surprise as carol Anne is sitting exactly where Diane left her, on the counter top, and the chairs are stacked up on the table in a way that seems almost impossible.

Diane decides to have fun with this and experiment a little. She puts a chair in the center of the kitchen floor, right in the middle of a circle, and suddenly the chair goes sliding down the floor, until it reaches the wall at the far end of the room. When Steve comes home from work that day, Diane can’t wait to show him what she discovered. She uses carol Anne to show Steve, by giving carol Anne a football helmet, placing her down in the center of the circle, and watching her slide across the floor. This is cool stuff. I like how the spirit in the house idea starts off playful and not that scary, with the parents just lightly having fun with whatever is causing this.

Then one-night things take a turn for the worst. It’s a dark and stormy night with lightning and thunder coming down hard outside. Robbie, the son, is in his bed, staring at a scary clown toy he has. He gets up to throw his jacket over the clowns head and then crawls back into bed. That’s when a tree bursts through the window, with branches reaching out like arms, and snatching Robbie up. The parents run out and have to rescue their son from the tree, leaving carol Anne in the house with a closet that turns into a vacuum and tries to suck her in.

The parents get back inside the house with Robbie, only now they see that carol Anne is long gone. She is trapped inside the television, with only her voice being heard. Another movie might have put her face in the TV so that there was a visual of her. This film knows better. It knows how to keep things scary and that the less we see, the better. Carol Anne’s voice comes and goes depending on the moment, and the parents can’t have any real conversations with her. They can just occasionally hear her calling for her.

The parents decide to bring in some mediums to see what they can do. First, it’s a team of three mediums, who really seem like they are studying the situation more then they are helping or offering solutions. Then it’s an older lady who is very short and strange looking. This woman seems pretty confident and helps the family open a tunnel into the other world to get their daughter back. The sequence is a lot of fun, with part of the tunnel emptying out into another room of the house. I love the way this whole sequence is slowly setup, trying out the tunnel by dropping numbered tennis balls through it first to make sure that it works. Eventually Diane gets to go through the tunnel herself.

The tunnel sequence is fantastic. In any other movie it would have been the climax of the film, but this movie isn’t ready to end just yet. It keeps on delivering the goods, letting things settle down now that the family has gotten carol Anne back, before really pulling the rug out from under them. After some time has gone by, we get another attack scene by spirits, starting with that creepy clown coming to life. Soon bodies are rising from the dead with graves breaking through the floor of the house, popping up into the air, and opening up to reveal dead skeletons come back to life. It’s all pretty incredible and creepy as hell.

Poltergeist is a lot of fun. It takes a little too long to get going at the beginning, but once that ball starts rolling, it just keeps on moving, faster and faster. The longer this movie goes on, the better it gets. I love that there is an explanation offered for why all of this is happening too, involving an old Indian burial ground where dead bodies were once buried. The story was that the graveyard had moved, but the truth comes out at the end, and it’s pretty intense. Aside from the slow first twenty minutes or so, this movie turns out to be great. It’s no surprise that this film became so popular and spawned many sequels. This is scary and creative stuff done right. Horror movies from today, like insidious, have clearly borrowed from poltergeist, and that’s because the ideas here are so rich.