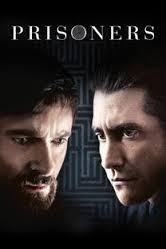 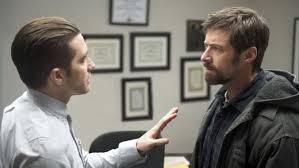 a pretty intense mystery that ends up being a cross between gone baby gone, zodiac, and changeling.

This movie is gritty and dark and a terrific film noir. it’s the story of a kidnapping and a father who takes matters into his own hands, but instead of a revenge movie about a father out for justice, this man is really after some answers. he’s playing the case from one angle, kidnapping the suspect and torturing him, while a detective is playing the case from the legal side. And we get to see it all. This is a loaded up cast of great actors all giving terrific performances. The movie is very smart in the ways it tosses the audience around and leads them to believe certain things and feel certain ways. When the torturing is going on, for example, the movie gives us enough information to feel sympathetic for the father and believe that maybe he is justified in his actions. the movie looks terrific, with some beautiful atmosphere, and the mystery plot line leads us into all kinds of cool directions.

Prisoners is a hell of a film. It’s a movie that combines fantastic performances with a gritty noir mystery, and even some wonderful scenery. credit director of photography Roger Deakins (Coen Brothers films), with the look of the film, but the rest goes to the story, director, and actors who are all bringing their a game to the table. Maybe it’s because they know how good this script is. The screenplay for this one sat on the top of a list of the best-unproduced screenplays for quite a while. Maybe that’s because of the delicate subject matter where two children are kidnapped. Then again, gone baby gone and changeling pulled it off years earlier. But Prisoners has an edge that those other movies don’t, and it involves the drastic measures that a father will take to get his child back.

The movie is about a family that lives in a nice suburban neighborhood for blue collar, working class people. The father is Keller (Hugh Jackman), and he and his wife (Maria Bello), have a teenage son and a young daughter. for thanksgiving, on one cold, gloomy afternoon, they go down the block to their friends’ home for dinner. These friends are Franklin and Nancy (Terrence Howard and Viola Davis, what a cast here), and they also have a teenager and a little girl. The kids play together and it isn’t long before the two little girls have gone missing.

At this point the family members do different searches around the area, with Keller going back to his house to see if the girls went there. They call the police and the movie cuts away to the investigation. Now we meet detective Loki, (played by Jake Gylenhal.) Loki is a guy who eats, sleeps, and breathes a case. he has solved every case he has ever taken on, and he starts with the r.v. that the teenage kids saw parked on the street that day. the two little girls were playing on it, and their older siblings (who are teenagers) pulled them off it. the teenagers also noticed that there was someone inside the r.v.

that someone is alex (paul dano, the best he’s been since there will be blood), a mentally handicapped young man. alex lives with his aunt, who took him in after something happened to his parents, and the police bring him in for questioning. the only problem is that they can’t find anything on him. a forensic team searches his r.v. inside and out and comes up with nothing. loki wants to hold him in custody another day, only the captain insists that they legally have to let him go. that’s when keller decides to do something.

keller’s not sure exactly what he’s going to do, when he drives up and parks outside of alex’s house. then alex comes out to walk his dog. it’s night time and keller sits there in his car, watching the boy. alex starts to strangle his dog, lifting him by the collar, before letting the dog breathe again. then alex does something that really sets keller off. he start singing the very same song that the girls were singing that day. this pushes keller over the edge and he grabs alex and kidnaps him.

keller is going on two things at this point. he believes that when he confronted alex at the police station earlier that day, alex said to him, “they didn’t cry until i left them,” and then there’s the song that alex was singing. this is enough for keller to bring alex to an abandoned house that once belonged to his father (setup in an early conversation of course), and start torturing the boy. this is some of the hardest stuff in the movie. we’ve all seen tons of revenge movies where a man has had someone he loves taken from him and now sets out to torture the villains. sometimes it’s even a kidnapping situation like this, where we don’t know if the victim is dead or still alive. movies like man on fire. but prisoners is different because keller is torturing a young man and also, he can’t be sure that this guy even did it.

luckily the movie provides us with enough reasons to believe alex is responsible so that we can handle what keller is doing. the song was the real thing that put us over the edge, the same way it did for keller. and on top of that, keller might punch alex in the face a bunch, but when it comes to the serious stuff like using a hammer on alex’s hand, keller shows resistance and self-control. he doesn’t want to be torturing alex, but feels that he has no choice. at one point he even asks alex why the boy is making him do this, begging for alex to tell him something so that he can stop. keller puts a picture of his daughter up in the torture room to remind him of why he is doing this and not to feel bad for alex.

as the movie goes on, it stops focussing as much on the torture and becomes more of a mystery. this is where things really start to get good. we were always hooked and captivated, but now we get to be thrilled. there are a number of side plots and red herrings that all factor in. one involves a priest who has something very strange in his basement. then there’s a man who has the clothing of the kidnapped children in his home. i love the way the movie takes us in different directions, slowly leading us back around to the truth. it reminds me of the great moment in gone baby gone when a new kidnapping comes up, that seems to have nothing to do with the little girl kidnapping which is the main plot of the movie, and yet this red herring side plot ends up putting us back in the right direction for getting the answers we need.

when things start connecting and the pieces come together at the end, we get some great moments of realization. these are surprises that you won’t see coming, and those, of course, are the best kind. there are lots of moments of uncertainty in this film, where you know something big is happening, but you’re not sure exactly what. that’s another great feeling, as you know you are about to get something exciting, and are on the edge of your seat. i’m talking about moments like when keller realizes something at the hospital and goes running out of the building, before we can tell what it is that he figured out.

there is so much to like about this movie, including the controversial directions that the story goes in. when a red herring pops up, leading us to think maybe alex wasn’t the kidnapper, all of the torture scenes that we’ve been sitting through suddenly take on a new light. this is a very smart and powerful movie filled with great scenery, and if all that isn’t enough, the performances here are pretty dynamite too. hugh jackman and jake gylenhal have both never been better. even terrence howard is giving it his all with this one, and when it comes to supporting actresses, you can’t get much better than viola davis. then there’s paul dano, doing so much with so little, really proving that less is more. prisoners might have some moments that don’t seem realistic every now and again, but for the most part it does a lot of things right and keeps us hooked. as far as mysteries and unfolding goes, this one really delivers.