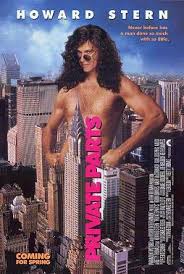 Better than expected, and much better than his show, this is actually a very funny and often smart film.

Howard Stern is a guy who built his career on being what some people consider offensive. To others, he’s a guy who tells it like it is, and asks real questions to his guests without holding back. This is the way he became big in America, by doing what nobody else was doing because they were afraid of what might happen if they did. And the movie Private Parts chronicles how Stern became this way, decided to present this act on the radio, and all of the obstacles that got in his way.

The movie is about Stern’s life, going all the way back to when he was a kid. But it’s specifically about how a desire to be on radio presented a path for him to navigate his life. For example, we never see young Stern in school, but we do see him take a trip to the radio station with his father.

As the movie goes on, Stern moves from job to job. He meets his lovely wife, Allison, and they have a few situations to deal with themselves. I didn’t care for the on air radio jokes about her losing a baby, but everything else in the movie was pretty funny.

At his early jobs, it’s about what he says. He has a marvelously idiotic bit where he pretends to be a black helicopter traffic reporter woman, repeating the same racist line again and again. And then he has a great bit where he pretends he was in Vietnam and talks about throwing a grenade into a schoolhouse and all he cares about is getting as many kills as possible.

When he moves to NY to work for NBC, he’s reached the big time. And the movie cleverly leaves a solid amount of running time for us to spend with him here. He suddenly has an enemy and the movie has a villain in Paul Giamatti’s Kenny “Pig Vomit.” Stern and Kenny go at it back and forth through the different gags Stern pulls on the air. Most of them are just meant to be funny, but Kenny takes each and every one of them personally. We even get a climactic fistfight, which is not what you would expect from this movie. But Stern gives it to us anyway, and it’s quite fun.

Howard Stern’s Private Parts is a very enjoyable movie, loaded with great comedic bits and a fantastic soundtrack. This must be the music that Stern loves, from Deep Purple to Bowie to Hendrix to AC/DC. It’s the rock and roll of the 60s and 70s and it works just right in this film. Aside from the comedy, there’s the story about how this guy had a dream and went after it, and how despite getting criticism everywhere he went, America embraced him. It’s a pretty interesting success story and it’s an extremely funny film.