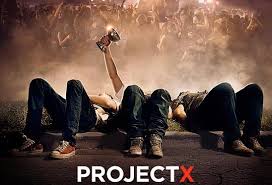 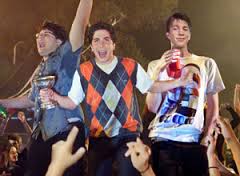 While the reality hand-held camera thing is a little annoying, in a Blair witch project meets chronicle way, this movie still manages to be clever and fun.

Project X is a pretty cool movie about regular kids throwing a party that gets way out of hand. The movie is filmed with that documentary style / hand held / first person kind of POV, where the cameraman is one of the character who the other character talk to. In addition, this camera seems to catch everything, including private moments and conversations. The thing that is so great about this movie is that it could have been just a bunch of random scenes and images, but instead, it has a real story. Now granted that story is not anything special and does border on clichés (the girl next door who the boys have known their whole lives and are suddenly considering now?) even still, it is the images and events that we get behind, and the story really just serves as some backbone. This movie takes Super bad to the next level and is miles away from can hardly wait. It is the new ultimate party movie, and a worthwhile ride.

Project X is a wild film. As the trailers will show you, it is the movie about a single, all night party. In addition, that is nothing new. It is a house party thrown by young, high school kids that get out of hand. Also, nothing new. We have seen movies like this many times over from can hardly wait to Superbad. The movies are always comedies and Project X is too, yet it still manages to find it is own way and be different. It is certainly the most extreme and most hardcore of the bunch, and that’s saying a lot, considering how wild Superbad was.

Project X is the all night party movie for the new generation. Can’t hardly wait was the movie for the nineties, and it was tame. It ended up being more like a romantic comedy than anything else, with its light hearted pg-13 atmosphere. Sure, there was Seth Green pretending he was black in the bathroom, but even that was kind of silly. Then came the 2000’s and we got Superbad. Now this was more like it. Superbad had it all, from the realistic characters to the humorous situations. The dialogue was off the charts brilliant, and Jonah hill’s delivery was out of this world.

Project X takes the genre to the next level. For one thing, it combines the party movie genre with the found footage genre, as the entire movie is shot through hand held cameras, and specifically is meant to look like a documentary with the camera man being a character in the film. This genre has really developed in the past decade, ever since the Blair with project. There was clover field, chronicle, and now Project X. each movie tries to combine the found footage feel with a standard popular type of film, from monsters and aliens to superheroes. Only Project X sticks with the realistic movie route. There are no creatures in this movie, and that’s a good thing.

The movie starts out with the planning of the party. It’s a Friday afternoon at the high school and our lead characters are telling everyone around to come. There’s Thomas, the main guy whose house the party will be at. He’s the straight man, the normal and somewhat dull guy of the bunch. He’s the Luke Wilson of the old school three. (Old school’s director, Todd Philips produced this movie). Then there’s Costa. He’s the wild man ringleader (the Vince Vaughn of old school.) Costa is the guy who makes this whole thing happen. And finally, there’s J.B., the fat friend, who is just along for the ride.

The kid’s walks down the halls promoting the party, sending messages out on their phones that say things like, “sexy bitches, be sexy, annoying bitches, stay home.” Thomas’ parents are out of ten for the weekend, and have trusted their innocent son. They are pretty sure nothing is going to happen and don’t even think their son has the potential to find any trouble. In one moment that feels a little forced, the cameraman manages to shoot through the open crack of a door and catch Thomas’ dad telling his mom that he thinks his son is a loser. Boy will he be in for a shock later on.

The movie really starts to get good when the three characters make the round together, going to the neighbor’s houses and letting them know that there will be a party. They introduce themselves, give the neighbors a cell number they can call, and basically ask the neighbors to be cool about all of this and not call the police. It’s a smart move, and I wonder why more kids don’t do it. In this movie, it helps set the party up even more. I love the amount of time this movie takes to set things up. It really helps to get the audience excited about what’s to come.

The kids go out and get dummies to throw in the pool and signs to hang around the pool area (naked chicks only), and they even get one of those balloon castle things for people to jump around in (I love the slow motion shot of the cute little dog jumping in it later on.) and then it’s time for the party to get started. These three kids even hire other high school kids to be their security complete with yellow security jackets, walkie-talkies, and everything. These are the details that matter. Each one of them adds a new level of humor to the film, with how seriously these kids are taking their party.

There are a few other stops along the way, before the party gets started, including buying some drugs from a crazy dealer. The boys end up stealing his drug filled gnome. And then, it’s party time. At first only a couple people show up, and then all of a sudden, everyone shows up together. Busses pull up to the house loaded with kids and everyone comes piling out. There are multiple DJs working the backyard, and Thomas does his best to keep people out of the house, but eventually just gives up on the lost cause.

About halfway into the movie, things start to get out of hand. If up until this point everything seemed kind of routine and clichéd, we certainly get thrown for a curveball once the twists start to happen. There’s a neighbor who comes over and has a problem with the volume of the party. Security has an interesting way of handling him. Then there’s a midget who goes nuts on everyone after being shoved into an oven. And finally there’s a guy who even brings out a flamethrower and wrecks havoc on the street. This is where the police come in.

Project X is a pretty wild movie. Cloverfield was directed by an unknown filmmaker, but produced by sci-fi mastermind J.J. Abrahams. Similarly, Project X was directed by an unknown filmmaker and produced by party movie mastermind Phillips. This is the guy behind all hangover movies. Nobody knows the men behaving badly genre better than him. On the surface, I was expecting this movie to be another Superbad and to really have nothing new to offer. Boy was I wrong. Sure there are clichéd moments, like a plot line that involves Thomas finally getting with the girl he has always been secretly in love with, who has also always been one of his best friends, but ultimately this movie looks to be unique as often as it can. I love the way things end up with the police out in full force, with riot gear and everything. I love the way the flam thrower guy gives us a climax that we never saw coming. It’s a very cool movie and a whole lot of fun.