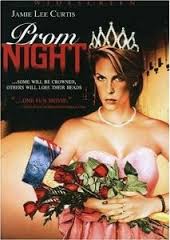 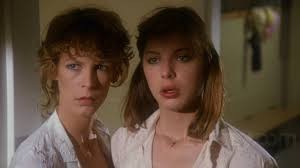 A very amateurish horror movie, that might be the founding block of other more modern classics, but is still riddled with all kinds of problems and mistakes.

Prom Night is a really poorly made, amateurish film. it is unquestionably the influence behind films like Scream and I Know What You Did Last Summer, and the sad thing is that those movies are both about a thousand times better than this one. that’s because they took small ideas from this movie and turned them into huge plot points. One of the many problems with Prom Night is that the murders don’t get started until we are two-thirds of the way in. We spend an hour being bored and not caring about these characters, and then suddenly in the last thirty minutes, we are at the dance and the killer begins his hunt. It’s a little late to be started the action and excitement.

Prom Night is a pretty lousy movie. It’s one of those films that are a building block for other horror movies, which came out later on, but as it’s own film, this one just doesn’t hold up. That’s because everything interesting about the plot is something that we’ve now seen done much better in other films. On top of that, both the action and scares are very minimal and are saved for only the final portions of the movie. I have no problem with a movie building up to the biggest scares, but this film gives us just about nothing in its first hour, and that’s a major problem.

There is no question that this movie was a major influence on scream. That, of course, is the film that restarted the teen horror movie craze, which ran throughout the late nineties. Scream itself had three sequels. After that movie there was I Know What You Did Last Summer and then Urban Legends. From those three there were all sorts of others; only each one of them became less interesting than the films before it. The genre got tired and ran out of steam pretty quickly. A big part of that is the fact that scream was the only really good film of the bunch (Urban Legends was okay.)

But Prom Night wasn’t the first movie to get this genre started. That film would most definitely be Halloween, the great teenager being attacked by a serial killer series.   It was the perfect movie for this genre, filled with scares and a masked human monster that popped up in all the worst places. This other Jamie Lee Curtis film (she was the star of Halloween) followed that one and preceded the other big franchise starters, Friday The 13th and A Nightmare On Elm Street. Those movies all featured teenagers and a single masked killer. Of the four of them, only prom night was not turned into a series. That’s because it was by far the worst.

It’s easy to see what makes Prom Night such a poorly made film. After an interesting opening scene, there is an hour of nothingness. The opening scene is a flashback to when this group of four teenagers was all little kids playing a game. It was a sort of hide and seeks game, where once they found you, the kids chanted, “killers are coming,” and kept walking towards you chanting that over and over again. It’s a crazy game, and who knows what these kids were going for or at what point they planned to stop walking towards the little girl. Clearly they wanted to terrify her and that’s exactly what they did. The girl went flying backwards out a window, and plummeting to her death.

At this point, the kids made a pact. It was a promise that would be the exact influence of I Know What You Did Last Summer, where four teenagers run over someone in the street and then make a pact to never tell anyone. But of course someone knows and is now stalking them, killing them off one at a time. This movie uses that idea, but doesn’t do enough with it. For example, the teenagers are never really made aware that the killer knows what they did. All he does is rip out yearbook pictures of their heads and paste the photos inside their lockers. That’s hardly threatening them that he knows their secret.

The other movie that was directly influenced by this one, of course, is scream. Now that’s the best of the bunch, and the influence is very small. It’s with the phone calls. The killer in this movie does make phone calls to the teenagers, but he doesn’t really say much or let them know who it is, and that’s a wasted opportunity. It’s almost as if the phone calls are used as filler here, trying to put whatever they could think of in that first hour, just to kill time until the real horror begins.

That first hour, spent with the teenagers is filled with very loose and irrelevant conversations. We spend lots of time in the high school hallways, listening to that likes who, and things like that. There is one girl who debates losing her virginity to her boyfriend and speaks to her friends about it. Then there’s a heavy boy who calls himself slick and drives around in a van trying to pick girls up. None of this is very interesting.

The story of the teenagers at school is cut with a story of detectives trying to piece together a case. Leslie Neilson, who is the father of the Jamie Lee Curtis character, plays the head detective. The problem is, we don’t see any murders. All we see is the police finding bodies, hovering over them, and discussing where the killer might be. It’s like they took the best elements from the genre (the deaths), and just cut them right out. Instead, all we see is the aftermath, where the police find the results. Now there are other movies where that format actually works, such as seven, but there has to be something different about the scenes of the police finding the bodies. they can’t be the same kind of generic scenes that we’ve seen a thousand times before. In this movie, they are.

The movie is only an hour and a half long, and it waits until those final thirty minutes before the murders start. The first murder, which takes place in the locker room, is so poorly shot that it borders on being pathetic. We see the killer come up behind a girl, and then we cut to a close up of her face. The film now starts moving in slow motion, seeing only her head as she is being killed. We don’t even know how she is being killed, but by the time the slow motion stops, the girl is dead.

There are so many problems with this movie. I still can’t believe they waited a full hour before getting the murders started. That’s something that the teen horror movies of the nineties made sure to correct. In those films, the murders start early on and then continue throughout the story. Aside from pacing, another problem here is the killer. He dresses in an all black leotard and looks really silly when he moves around the dance floor, surrounded by disco lights. At one point, it looks like he is about to start break dancing. There are some things to like about prom night, such as the disco themed prom dance and the movies that this one served as an influence of, but for the most part it’s a pretty lousy film.