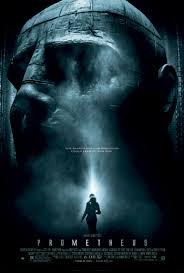 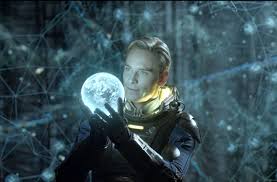 A pretty cool movie about exploring outer space and the horrors that one might find.

Prometheus is a very interesting and wild movie. It’s sci-fi mixed with horror, and it keeps you on the edge of your seat in nearly every moment. That’s because there is always this haunting feeling like things aren’t right and something terrible is about to happen. And very often it does. The movie is about astronauts who travel to another planet searching for answers about the beings that created humans. They end up finding all sorts of creepy, crazy things. The first half of this movie is mostly explanation and getting our interest. The second half is where things really become incredible.

Prometheus is a pretty wild movie. It’s a thriller that keeps you guessing, wondering, and trying to make sense of the many scientific details and plot developments. The movie is also meant to be a prequel to the alien films. Riley Scott directed the first alien movie, made in the late 1970s. It kicked off a giant universe of films that unfortunately mostly turned out to be bad. But Scott, himself, never lost his integrity. He made one other sci-fi movie, blade runner, and then left the genre. His career since has been pretty enormous, and he’s become known as the battle movie / Russell Crowe movie director, making gladiator, Robin Hood, and American gangster. And now, after decades of staying away from sci-fi, Scott has returned with a prequel to the original universe that he created.

Now Prometheus is not a prequel in the traditional sense that it tells the same kind of story. The alien stuff really doesn’t kick in until the last twenty minutes or so. But you can tell throughout the film that the things that are happening are leading us in that direction. It all feels part of the same universe as alien, and that means it’s all moving in the right direction.

The movie opens on an unknown planet with a creature that looks like a mix between human and alien, drinking from a river. The river is a part of a waterfall, and as soon as the creature finishes drinking, his body falls apart. We see the DNA strands inside of him turns black and then break apart. We see his body collapse and crumble and then fall into the water. And then we leave. Later on, we will begin to understand that this was perhaps the first human.

The movie follows this opening sequence with taking us into caves where a discovery is made, and then onto the Prometheus space ship. Like the first two alien movies, (the only good ones in the series), one of the first scenes of our main character, heroine, has her sleeping in a vessel that maintains her deep sleep for a period of years. We follow a robot-man around the spaceship. this is David, (played by Michael Fassbender,) as a robot modeled after Peter O’Toole in Lawrence Of Arabia, and he is monitoring the passengers on the ship.

When David wakes them all up, we meet the crew and are introduced to each of their purposes. There’s Charlize Theron, playing the company boss and head of the mission. She works for the man who has financed the whole thing. That man is played by guy pierce in some extreme makeup that makes him look like an old man. there is also Idris Elba on board, as the ship’s pilot. and then there are the two scientists who are in charge of the discovery mission. Naomi Rapace, (Elizabeth Shaw, our star), and her husband, Charlie, (played by Logan marshal Greene, a guy who looks a lot like tom hardy.)

Shaw and Charlie explain to the crew what they are doing here. They talk about how they have discovered cave drawings in caves from the most ancient human civilizations and one have single similarity. All the drawings have this image of the stars set in the exact same way. This leads them to trace that pattern of stars into the solar system to find another planet and another moon that is next to those stars. Shaw and Charlie believe that whoever made the cave drawings came from that planet.

The movie takes it’s time with the explanation, and even has other characters question it, in the name of Darwin, and other things. At the end of the explanation / interrogation, the fact still stands that these people are being sent to a new planet to see if there is life out there. When they arrive, they find a giant dome like mountain, which doesn’t seem like it’s natural. “God doesn’t build in straight lines,” one of them says. They go, explore, and find that it is a sort of cave like bunker.

Once inside, they find a creature’s body on the ground and a bunch of strange vase like structures. They take the body back onto the ship with them as well as one of the vases. But two of their crewmembers get lost in the cave and separated from the group, and the ship cannot pick them up until morning. So these two guys are stuck out there for the night, and you can bet things will not turn out very good for them.

This is where the horrors and thrills really begin. The men are attacked, but more strange alien things follow. Back on the ship, the crew removes the helmet of the creature’s head and they see how human it looks. Meanwhile something that is not exactly human impregnates one character. And something that completely destroys him infects another.

The second half of the movie is pretty ferocious. It has so many ideas and directions that it goes in. and the thrills are real, crafted by a man who knows that the way to really get an audience invested is to take your time. Just like alien, where Ridley Scott slowly led us up to the creature, and carefully explained the details of what was happening all around them first, he does the same thing here. There are some dynamite scenes in this movie, including a hell of a mechanical surgery sequence. And I love that the end of the film really does provide some of the building blocks that would lead up to the alien movies. I was concerned that this movie might have had the first viewing thriller syndrome, where after you see it the first time, it will never be as good, because you know what’s going to happen every other time. I was wrong. It seems like this film is so packed with detail and explanation that it only gets better on multiple viewings. It is a very smart and intense movie.