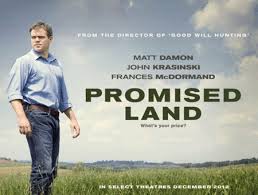 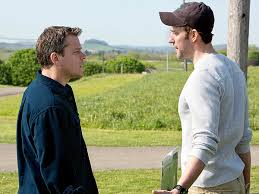 A pretty smart movie, with some interesting ideas, this one moves a little too slowly at times, but otherwise is a pretty good film.

This is a good movie that is punctuated by a great ending. The movie is about a big fracking company that comes into a small town and wants to lease the land. They want to bring their drills in and start drilling the land looking for natural gas. The main characters, Steve and Sue, (Matt Damon and Frances McDermond,) are pros at this and have closed more towns than anybody else in the business, but this time they are up against their match. Especially when a man representing an environmental group shows up and tries to convince the people to vote against letting the fracking company come in. There are some slow parts to this movie and some subplots that feel a little forced, (like the love triangle that develops,) but for the most part it’s a good, smart  film.

The movie is about fracking, and about a big business natural gas company called Global that comes into a small town and wants to lease the land. Leasing it means they want to pay the people to have access to their land and to drill on it. The people can still live in their homes, and Global is by no means buying the land, but simply buying the rights to use it. And Damon’s character, Steve Butler, is Global’s go to guy to make it happen. The movie opens with a scene between Steve and his boss, discussing how great Steve is at this job. Apparently he has out closed the next team behind him  by triple digits. And now he’s up for a major promotion.

Steve explains that the reasons why he’s so good at this are because he grew up on a small farm town and watched a factory close down in the area. He watched all of the people who lived in his town lose their jobs and how the whole town ended up going under. Steve knows that when times are hard and you are given an opportunity in a situation like this, you take it. He believes that he and Global are doing the right thing, and are offering these towns the kind of money that can get them back on their feet.

After his meeting with the boss, we get to see Steve in action. While he’s waiting to hear about the promotion, he’s got a job to do. He’s going to a small town to try and close as many people as he can. Steve goes on the road trip with his partner, Sue, (Frances McDermond.) They start out at a little convenience and clothing store outside of town, buying outfits to try to fit in. These guys are good, and they know that looking the part is important. And then Steve goes to meet with the politician who represents the town. The idea is that this man has a lot of pull, and if he tells people to sell to Steve, then they will. But first, the man wants to know how much money Steve is willing to pay him for his support. This is a great scene, where the man hopes to get a lot more than what Steve is offering, but Steve convinces him that it’s a one time offer and if he walks away from the table, they are leaving the town and will come back later, after all the other nearby towns have signed on, and will offer them nothing. It works.

The next day, Steve goes to the gym at the local high school, where the town has called a meeting, and addresses everyone who has come to hear him speak. The politician introduces him, saying that they will be bringing natural gas to their town, and everyone seems excited. But then a man named Frank (Hal Holbrook,) speaks up. Frank is a science teacher at the high school, and he’s been doing his research. He knows about what drilling into the land can do to it. Especially when the company starts using chemicals to fill in the holes. He knows about contaminated water and about the way that the livestock on a farm suddenly dies. And Frank gets the people to rally behind him. The decision is made to have the town put it to a vote in three weeks time.

Steve leaves and gets on the phone with his company. They do a Skype call where we see how unhappy they are. If the town puts it to a vote, than that means that it’s all or nothing. If they vote no, than Global can’t drill on any of the land. That’s not the kind of business Global is used to doing. They’re used to closing as many individual houses as they can. So now, Steve and Sue are in some hot water. And it gets worse. The next day, a man representing an environmental company called Athena shows up. This is Dustin Noble, (John Krasinski,) and he’s here to make a whole lot of trouble.

Steve sees Dustin around, driving in his pickup truck, and keeps asking questions about whether there is an environmental presence here, in the town. He can tell that Dustin is from some kind of organization. And one night, at the local bar, Steve finds out. It’s karaoke night, and Steve and Sue have come there to sing and make fools out of themselves, in order to fit in with the people of the town a little better. But Dustin takes the stage and ends up being the one who really gets the crowds attention. He tells them of the small town where he’s from and how Global came in and did the same thing to them that they’re trying to do here. He talks abut how all the land just dried up. Then he does some karioke and makes a fool out of himself, getting the crowded bar to sing along and even come on the stage with him. Basically, exactly what Steve and Sue were hoping to do themselves.

Steve and Sue leave, and later that night they go to the motel where Dustin is staying and confront him. They offer him money to go away, and he takes it. Only Dustin doesn’t go away. He starts going house to house talking to people and getting them to let him put up signs that say, “Global, Go Away!” Dustin starts frequenting the local spots, talking to the people and really fitting in. He visits the school and does a presentation for the kids where he explains what fracking is and what happens to the land. It’s a great presentation and it really helps show the process, to the viewer as well.

All of this stuff is pretty good. But then there are plenty of other parts to this movie that are pretty cliched and amateurish. Like this character, Alice, (played by Rosemary DeWitt,) who is the local girl at the bar that Steve picks up his first night there. He starts to develop feelings for her, and of course Dustin swoops in and takes her out for a date. This romantic triangle story is just kind of thrown in. It helps with the very end of the movie, and what happens to Steve, but otherwise it’s pretty unnecessary.

And for a while, with Dustin on a role, Steve finds himself in a major slump. He finds things spiraling out of control with the people of the town. For the first time he is stumped, and has met his match. And then the movie gives us some major twists. There’s an ending here that pretty much makes the movie. Without it, this would be a much more dull and routine film. But the ending is one of those game-changers and it helps deliver a knock-out punch. This is a pretty good movie. It’s a little slow at times, but for the most part it works.