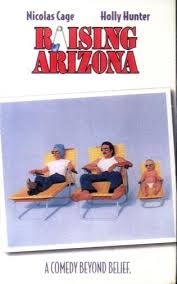 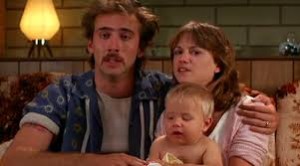 Raising Arizona is one of the wackiest Coen Brother’s movies there is, and that’s saying something. No it doesn’t has semi-supernatural aspects like a guy who works in a clock tower and can freeze time, such as their movie The Hudsucker Proxy had, but it’s crazy while maintaining a sense of potential realism, kind of like The Big Lebowski. There was nothing in either movie that really couldn’t happen, and so by keeping the movies grounded in reality, the ridiculously insane things that do happen are the more funny.

Like Lebowski, this movie is a criminal comedy about a kidnapping. But unlike that film, where the hero was just thrown into the mix and really had no connection to it, in raising Arizona, Hyde (Nicholas Cage) is the kidnapper himself. He and his wife Ed (Holly Hunter) want to have a child but can’t. She’s barren. And so they kidnap one from some parents that just had quintuplets. According to Ed, those parents have got more than they can handle.

The movie opens with a ten-minute sequence that moves at rapid speed and tells the story of how high was a criminal, being brought in to jail on a regular basis, serving his time in prison, being released, and then being brought back in again. Nicholas Cage narrates the sequence with some humorous voice over, and each time he comes in to have his picture taken, he has some words with Ed, who is the police officer working the camera. The sequence plays with sound, rhythm, and repetition in a way that is pure Coen Brothers. It finds the humor in the way people talk. There’s the board that decides if high is ready to go free or not, where the man who speaks to him always says, “okay, then.” and then the fellow police officer at the station who always reminds Ed of something. “Don’t forget to get his fingerprints, Ed.” all of this comes back in an unexpected way at high and Ed’s wedding with the fellow cop in the background, “don’t forget the bouquet, ed,” and the priest asking them if they accept each other in marriage and then saying, “okay, then.” it’s all about sound and dialogue and moving fast and it’s a fantastic ten minute opening sequence.

That opening spins us right off into the kidnapping with high and Ed driving off into the sunset ready to get them a baby. The kidnapping sequence has high climbing a ladder into the baby’s bedroom window and then having to deal with some uncooperative babies as he tries to figure out which one to take. He ends up chasing a couple of them around, one under a bed, another down the hallway, and the whole thing is a lot of fun. He has such difficulty with these cute little babies who are almost like messing with him, seeing what they can put him through.

Eventually high gets a baby, he, and Ed take off. Meanwhile, some of high’s former inmate friends bust out of prison and the first stop on their list is to come by and see their old buddy high. These two convicts (John Goodman and William Forsythe), show up on the doorstep and end up making themselves right at home despite Ed’s objections. For she and high, they are just one more problem they now have to deal with.

Another is that high’s boss is coming over with his wife and kids tomorrow to see the new baby. That sequence is a lot of fun, with the kids out of control, running wild throughout the trailer home, tearing the place up. I suppose it’s not too far off from the baby sequence earlier, where those babies ran high through the ringer, but both scenes are extremely funny. And by the end of it, high has punched out his boss and been fired from his job.

The father of the lost babies gets an unexpected visit from a bounty hunter who is on high’s tail. This bounty hunter, who looks like something out of the Road Warrior, is someone that high has seen in his nightmares. High even speaks about him, telling of how he’s unkind to the smaller creatures such as rabbits and turtles. We watch as the biker / bounty hunter drives around setting the road and creatures on fire. And we listen to high’s voice over to try to put what this bounty hunter is all about into words. It’s both artistic with its sound and imagery and poetic with high’s words. And most importantly it’s very funny.

Pretty soon, high is faced with his criminal ways again, as he finds himself at a convenience store holding the clerk up for a pack of huggies diapers. The police show up at the store and a foot chase ensues, involving giant guns being fired through the air, a pack of wild dogs chasing high down the street, and high knocking into or crashing through nearly everything in his path. This is my favorite sequence in the movie, probably because of how ridiculous and also exciting it all is. The sequence moves at rapid speed, is action packed, and doesn’t skip out on humor. Like when high throws the huggies at the cop, the cop goes flying backwards, and a lady slams into him with a cart full of groceries and keeps on moving. That’s just like the scene…it keeps on moving. From the convenience store to the street to a local neighborhood to the inside of the houses to a large supermarket. It’s a great lengthy chase.

And that sequence brings us into the next part of the movie, which is also a lot of action. This time, not only is high competing with that bounty hunter who is still hot on his trail and getting closer than ever, but he’s also got those two convicts who were staying with him to deal with. And they have an interest in the baby too. The film becomes a road movie in its final act, with massive car chases down the empty Arizona highways with the dessert backdrop all around. There’s a funny bank robbery scene and then more road chases and fights. It all moves so quickly that it never seems repetitive, even when it is.

Raising Arizona is a whole ball of fun. It’s got a fairly simple story which ends up being a good thing because it frees the Coen Brothers up to play with humor and style. Everything works here, from the actors involved (Goodman and the Coen Brothers are always great together), to the setting, to the music, to the extremely fast pace. Nicholas Cage is also fantastic and this is one of his two best movies, (Moonstruck being the other one). And the story and way that it moves is a lot of fun. The coen brothers specialize in criminal movies and more often than not the main characters are the criminals. Raising Arizona is no exception, although it is lighter than most coen brother’s movies tend to be and certainly a lot more wacky.