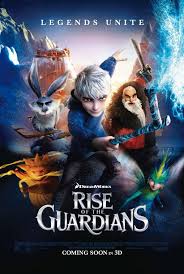 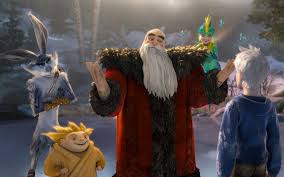 It is cute and fluffy, and even clever at times, but this is no Wreck-It Ralph, or Pixar-caliber film, and is clearly more for kids than adults.

Rise of the Guardians is built on a pretty cool basic idea about a new set of heroes who are actually as old and as fundamental as the basic holidays. Some of these are religious heroes (Santa and the Easter Bunny), while others are sleep icons (The Tooth Fairy and The Sandman.) then there are others that are just interesting made up figures, such as Jack Frost and the Boogeyman. The problem with the movie is that is spends so much time on characters that it forgets how important a strong plot is. The story here, about kids not believing anym

Rise Of The Guardians seems like a decent enough film on the surface. It is an animated movie about fantasy and fairy tale like characters that live in a world of magic. The movie is super colorful and filled with action in a way that is reminiscent of kung fu panda, where animals really do bounce around and fight each other. The premise of who these characters are is also pretty cool. They are holiday figures. As if trying to be a light-hearted version of the themes from the Tim Burton, gothic animated film, and nightmare before Christmas, this one features the iconic figures from some of the biggest holidays or made-up stories of childhood.

Santa Claus is the leader of the crew, and he is a big and overweights Russian (voiced by Ale Baldwin, with such a thick accent that the actor is barely recognizable.) then there’s The Easter Bunny, voiced by Hugh Jack man, going hard at the Australian accent. This character hops around like a kangaroo (which he gets called), and throws a boomerang. Aside from those two, there is also the Tooth Fairy and the sandman. The Tooth Fairy has a bunch of mini-versions of herself, called baby teeth, and The Sandman never speaks. Instead, he just makes things out of sand, and we even see his thoughts pop up over his head as sand images.

All of this is creative and interesting. There is no doubt about it; this movie has a great set of initial ideas. It is where the story goes that is sometimes the problem. At the very start of the film, we meet jack Frost (voiced by Chris Pine), who is explaining how he does not really know who he is. Already the movie is starting off in clichés. Frost spends the movie on a mission to figure out his place in the world and is often found saying lines like, “in order to know who I am, I need to first figure out who I was.”

The main problem that the characters face here is that if kids stop believing in these mythical creatures than the creatures will stop existing. I am not sure what that means exactly, other than the idea that kids will no longer be able to see them. Does it mean they will die or disappear altogether? The movie does not really say. Instead, we just see at the beginning of the movie that kids do not seem to know jack Frost is there, beside them, and can actually walk right through him. Later on, this same thing happens to some of the other characters, like The Easter Bunny. It is a very clichéd idea, this disappearing from existence stuff, and reminds me of back to the future with Marty McFly’s hand disappearing while he is performing Johnny B. Good on stage at the end of the film.

The point of this movie seems to be that the guardians have to get kids to believe. In addition, they have a nemesis that has the same problem as jack Frost. Their enemy is the boogey man (voiced by Jude law), and his problem is that kids do not believe he is real. Therefore, The Boogey Man is trying to make it so that the kids do not believe in any of the guardians. I’m not sure how that would really help his cause, other than the simple jealousy of, “if they don’t believe in me, then they shouldn’t believe in any of you, either.”

The boogeyman rides around on waves of black clouds and has nightmares that dispatch his dirty work for him. That’s supposed to be a clever take on the word “nightmare,” as these creatures are literally black horses. But the problem is that the movie is built on some very thin concepts. There is the whole idea of the tooth fairy, for example, and how each tooth that she collects is actually a memory. The point of all of this is so that jack has a way to see who he was as a human before he became jack Frost. None of it feels as creative as the movie would like it to seem.

Instead of trying to compete with the movies of Pixar, which just hit a very strong point this past year with wreck-it Ralph, rise of the guardians seems like it is more concerned with measuring up against other DreamWorks films. There is kung fu panda, of course, also by DreamWorks, but then it also has similarities to despicable me. There is no question that the little elf-like creatures in the north pole, who are dressed in red bell outfits and never say anything, are meant to be like the minions in that movie. This would be fine if the tooth fairy did not have her own little baby teeth creatures serving the exact same purpose. They are all pretty cute, but having too much of them just distracts us from the story.

I suppose that might be the point. Rise Of The Guardians doesn’t really have much of a story, and so any chance it can get to distract us from realizing that is one that it will gladly take. The ideas are so limited that in one scene, three different characters are knocked out and each one has a simple image circling around his head. For Santa Claus its candy canes, for The Tooth Fairy, it is teeth, and for the rabbit, it is carrots. It is at about this point that I realized how much this movie was geared to kids, and not really made to be appreciated by adults.

Like most action movies, the excitement builds up as the movie goes on. The problem is that it is the more simple action scenes that really work better in this film. There is an early scene where a boy rides a sled and jack Frost creates paths of ice for him to slide around town. That ends up being one of the more interesting action scenes of the movie. This film runs out of ideas for action very fast, to the point where it starts to repeat itself. We get a scene of the characters on Santa’s sled, zooming through an icy tunnel and then just a few scenes later get a scene of them all sliding through a rabbit hole, which pretty much looks like the same thing we just saw.

As the movie gets to it’s climax, the action and plot are thrown so far out the window that we stop caring. What seemed great at the start of the film suddenly becomes meaningless the longer this movie goes on. There are scenes that feel like they are simply in there to waste time or give us fun visuals while having no relevance to the story. One of these scenes involves all of the characters running into different bedrooms collecting teeth from under pillows. The most interesting thing about this movie is that it had Roger Deakons (the director of photography who works with the Coen brothers and is an amazing artist), on board as a consultant. The look of the film is fantastic, and I am sure a lot of the credit for that should go to him. Unfortunately, the plot does not really have much substance and the scenes end up being more of a letdown than creative and fun.