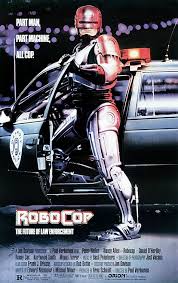 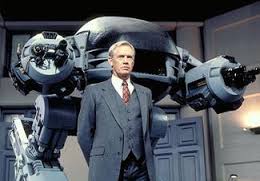 A classicly cool action movie, this one works as much for its stop-motion effects as it does for it’s storytelling.

Robocop is a great action movie. the machines are incredibly cool, but what makes this film really work is the story that not only deals with this cop out for vengeance, but also all of the little behind the scenes corruption elements. This is a movie loaded up with villains and corporate takeovers starting with the very first boardroom scene where a man is shot to pieces. The competition between two technicians is what leads to the creation of Robocop, and the movie simultaneously runs multiple plots, which really go a long way. Add to that the fact that director Paul Verhoven holds nothing back when it comes to violence and effects, and this movie turns out to be a real winner.

Robocop, the original 80’s classic is a hell of a movie. This is the sic if action flick that combined robots and machines with cop movies. It did so by not holding back on the darkness or violence, but instead going all out with severe action and a sense that the only way to do this movie right would be to spare no expense. It was director Paul Verhoven who really made this movie what it was, the same guy who made Total Recall, Basic Instinct, and Starship Troopers. Verhoven was a master in his time, and this movie was quite possibly his greatest masterpiece.

The film opens with news footage of the violence going on around the world and is quickly followed by a boardroom meeting. An older man named dick Jones (Ronny Cox) presents his new robot to the boardroom and it is massive. This thing, called the ED-209, looks like an alien creature and comes into the room as part of a test. A man aiding in the test picks up a weapon and the robot tells him to put it down. The man does, only it doesn’t register with the robot and so the robot gives him a countdown. This leads to the man getting shot by the robot over and over again in the chest. It’s bloody and it’s fantastic. What a way to start the movie off.

This leads us to a younger guy, Bob (Miguel Ferrer), in that same boardroom meeting, taking Jones’ failure with his robot as an opportunity to get the green light on something he has been working on. Bob wants to make a more human robot and to combine it with a real man. He just needs the right cop to try it on. Cue Murphy, (Peter Weller) a dedicated cop and family man, who we meet at the police station with his partner. The police officers are in the locker room considering going on strike and that’s when their captain steps in and tells orders them against even thinking about it. People need them and they don’t have the kind of job that has the liberty of going on strike, he says.

Murphy and his partner, Anne Lewis (Nancy Allen) takes a case where they pursue a gang of criminals out to an abandoned warehouse. That’s where they find themselves walking into a trap. At first it seems like these two rogue cops have the jump on the villains, but soon the tables are turned and the bad guys take pleasure in the terrible things they can do. They shoot off Murphy’s hand before firing a ton of rounds into him. For some reason they leave Lewis, which goes unexplained, but when they take off, it doesn’t look very good for Murphy.

As it happens, whatever’s left of his body and brain turn out to be exactly what bob needs? He begins his experiment on Weller and soon we are seeing it all from Murphy’s point of view. It’s New Years Eve and everybody is celebrating in a room all around him, occasionally walking over to look at him and make comments. Seeing this from Murphy’s point of view helps us stay in suspense of what he actually looks like. Especially since we keep seeing people’s reactions to him as they come over, stare at him, and make comments to the people they are with.

We get our first look at the Robocop when he walks into the police station, and even this is handled with care and precision. At first he is hidden from us, walking behind glass walls and things like that. Once again, we get to see people’s reactions to him more than we actually get to see him. And then suddenly he is upon us, looking incredibly cool, with a metal rib cage and spinal chord and everything. He starts going after bad guys pretty quickly and that’s when we get that incredible theme music.

Robocop’s first real mission of his own is to go after the gang of bad guys who shot up Murphy’s body and made him this way. He rounds them all up only there’s a problem. The head villain, Clarence (Kurtwood Smith) says he works for Dick Jones. That’s enough of a connection at a high level to get him released from custody by the police and back out on the streets.

Jones, meanwhile, has his own subplot, where he’s getting tired of Bob’s Robocop experiment and of Bob running his mouth about how successful it is. There’s a great means room scene where Bob is talking on and on about how Jones is finished and a dinosaur and then Jones steps out of one of the stalls. All of this leads to Jones sending Clarence after Bob to kill him.

Robocop doesn’t take Clarence getting released so lightly. This time he decides to go straight for the source of power… Clarence’s connection, dick Jones. He shows up at Jones’ office and Jones sacks the ED-209 on him. There’s a fantastic fight between Robocop and this machine including the use of all kinds of robotic weaponry.

The movie is hardly over, however, because there is still Clarence and all of his men out on the loose. That’s what is so great about this film. It keeps going and going and has enough villains and storylines to keep it interesting at all times. I love that not every storyline is centered on Robocop and that there is the whole side plot about Dick Jones, bob, and their unfriendly competition. It’s great to have two main villains here, with both dick Jones and Clarence, and I really like how Robocop gets to take on the ED-209, the machine we saw in action at the film’s start. This is a pretty exciting and wonderful movie.