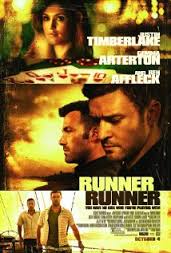 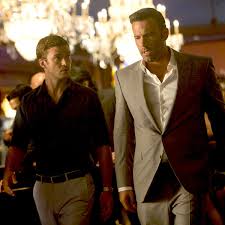 A very cliched movie that has been done better a ton of times before, be it wall street, boiler room, the wolf of wall street, rounders, or many others.

This is the kind of movie Ben Affleck used to make. Call it his reindeer games days. Back when he was jumping on board big budget action movies (like Paycheck), just because they sounded like fun. He even made a movie just like this one before, where he had the Alec Baldwin-Glengarry Glen Ross-like role. The movie was Boiler Room, and Affleck had the role of a guy in one scene delivering a lengthy monologue, telling other, less fortunate guys how great the life was. That was a much better film than this one.

Runner Runner is a simple combination of things that we have seen before. It’s about a fish out of water who goes to work for a big investing giant (in this case instead of investing it’s online gambling), where people who work there get rich fast while doing illegal money operations. Basically they are stealing. In the case of this movie, it’s a sort of Ponsi scam where they are taking the money that people have put into the system and moving it other places, so that it can end up in the pockets of the people who run the whole thing.

all of these movies are the same. the life seems great at the beginning. the naive hero wants to get in on it and worships the guys at the top. then he gets pulled over (or in this case kidnapped) by the fbi, who tell him the truth about the place where he’s working. the firm is another great example, with tom cruise playing the new hot shot lawyer coming in and dreaming big. pretty soon the guys he was looking up to are the villains and our hero is siding with the fbi, wearing a wire, and trying to build a case against his employer.

sometimes you get a movie like the wolf of wall street that finds a way to tell the story differently. in that film, there was no fish out of water. the hero wasn’t an innocent building a case against his boss. instead, the movie was about the boss, and we got to see him create his company from the start (although even that film had some opening scenes where the protagonist was the new kid on the block, and shown how great the life could be by matthew mcconaghey.)

in runner runner, the movie does get off to a pretty nice opening. it starts out at princeton university, showing us our hero, richie furst (justin timberlake) living the college life. for him, that includes helping his professors with their online gambling and getting called into a meeting by the dean for investing the money of other students in an online gambling site. this scene, in the dean’s office, is probably the best in the movie. that’s because it’s the only scene that actually feels honest, as ritchie defends what he’s doing, saying that the site pays him a commision to sign up new players, but he is in no way stealing from anyone.

the dean shuts him down, and that’s a major problem because ritchie is already struggling to pay his tuition. instead of getting a normal job like anyone else would, or applying for financial aid, ritchie decides to go online and just try his hand at putting whatever he has on the table and seeing what he can do with it. that amount is seventeen thousand, and of course he loses it all. this isn’t rounders, but it sure wishes it was. it also wants to be the social network, as evidenced by the way he sits at a table in the middle of a dorm room with tons of coeds sitting down all around him, watching him play as if it is the coolest thing imaginable. the scene literally feels like it’s out of that movie (which also starred timberlake.)

ritchie now proves that he was hustled (all of this happens in one scene where he meets with a guy who shows him a graph of the moves by the guy who beat him,) and then decides to do the craziest thing in the movie. he plans to fly to costa rica to find the guy who owns the site and show him that his site has been hacked. ritchie believes that someone on the site was able to see his cards. otherwise the moves made by the other player don’t make any sense at all. there are so many reasons why this is a stupid idea, starting with the fact that ritchie has somehow convinced himself that he can find ivan block, (the owner of the site, played by ben affleck) and that block will sit down and listen to him.

now, the moment when ritchie does meet block for the first time, is actually pretty cool, but it’s the last decent moment in the movie. it’s at an incredible party where ritchie uses invisile ink and flashes messages to a security camera. soon he’s being escorted over to where block is sitting and telling the man what he knows. block looks like a king, having a servant brought to him, and quickly sends ritchie on his way.

the next day, block has timberlake brought out to his boat and gives him a job. so ends any potential this movie had of being interesting or creative. from here on out, it becomes as routine as possible. now timberlake helps run card games and on line gambling sites. in one scene, he actually becomes the dealer of a craps table where a guy at a party is causing a disturbance. i was hoping this movie might throw some real violence and murder into the mix, with the trailer’s promise of a crocodile pitt scene, only even that is just used for a threat.

this is a genre that has been done so many times that the only way to do it right at this point is to find a new angle. the wolf of wall street did that and so did blue jasmine. runner runner, however, wants to be the same old tired thing. it thinks it has something new, just because it sets itself in the world of online gaming instead of stock trading, but it is absolutely the usual formula. if they really wanted to be different, they could have started by not having the fbi in the film. instead of a movie where ritchie goes to work for the bad guy, i would have preferred more of a mystery where he spends the film building a case against the guy. in that case, the scenes where ritchie figured out what happened to him on the site, and put the pieces together one clue at a time, would have been given a lot more attention. now that could have been a cool movie. runner runner is basically a compilation of other, better films. it has nothing new to offer of its own.