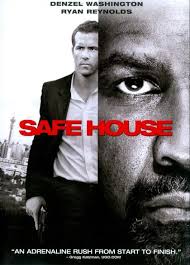 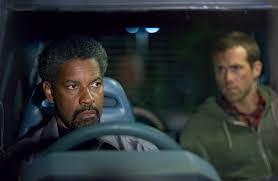 There might be some decent action here, but this is hand down the most predictable and clichéd movie I have seen in over a decade.

Safe House is a movie that we have seen a thousand times before. It has got one single idea to it, which is the log line of the movie, and then from there it has got nothing new to offer. That log line is simply that a man with little experience in the CIA, who is basically just a gopher, gets to be the one safe guarding a huge mastermind spy who sold out tons of America’s secrets. There is nothing that great about even this initial premise. It certainly calls up other Denzel Washington movies, like training day, where again it was him playing the conniving mastermind alongside a naive and innocent rookie.

Safe House is the very definition of routine. However, it is one thing to be a routine movie in the genre, accomplishing the same good things that other similar movies tend to do, but it is another to be so predictable that you can see every move coming. You this movie, you might even be correct at guessing exactly the way it is all going to go down. Safe House does not even try to be creative. It recycles bits from every spy movie under the sun, from the Bourne films to the bond films to the Jack Ryan movies, such as clear and present danger.

Yet, despite all of these problems, the movie still ends up being okay. It is by no means good at all, and every bit of the plot feels tired, but still this movie is somehow watchable. That is probably in large part because of the action. There is not anything great going on with the action here, but there is certainly a lot of it. In addition, like anything else, if you keep trying and trying, repeatedly, some of what you come up with will end up being pretty decent.

That is basically, what happens with the action in this movie. Most of it is the same, usual thing including cars smashing into each other or going off the side of the road. However, after a while of watching countless fights, some of the small ideas sprinkled into them here and there end up being okay. Like a moment where one of the characters is running on the rooftops of little shacks and ends up getting pulled down into one of these roofs. Alternatively, the strangling scene with Ryan Reynolds and a safe house employee that ends with the use of some pieces of broken glass.

However, the thing is, there’s really nothing creative here. Even the moment where Reynolds and Denzel hold guns right at each other, close-up, might look super cool, but it is completely ripped off from John Woos movies and the director’s signature moves. Since everything else in this movie is right out of other films that have done it better, there is really no reason to be surprised about this. Safe House hopes that we are not familiar with those other films. If you have not seen any John woo movies, for example, you might think this close-up gun standoff is original. That is certainly, what this movie wants you to think.

However, even if you do not know John woo, you certainly know the clichés of the spy thriller. One of the main good guys will turn out to be a bad guy. Most characters that make it seem like you can trust them are lying and just waiting for their moment to attack. To show boredom, a character will be sitting on the floor throwing a rubber ball against an empty wall and catching it. In addition, at some point, someone will utter the line, “who do you work for?” even if there is no reason to think that there is anybody higher up on the ladder. Oh, and the good guy will end up doing things that only a superhero could really do. It is one thing if they give us a reason for why our hero is so skilled at fighting, like the Bourne movies did, but it is another to not be told anything and just have to watch these ridiculous escapes.

As far as acting goes, at least there are good people on board here. Denzel might be playing a role that he has played before, but that is often a good thing. When Vince Vaughn, for example, plays a fast-talking wise ass, (does he ever play anything else?), we know that he is right at home in his comfort zone. The same can be said of Ben Stiller playing the straight man to a bunch of weirdoes. However, the thing is, those movies are comedies. We go to laugh, not to be thrilled. A thriller needs surprises and things that we have not seen in other movies before, and safe house offers none.

What it does offer is a bunch of name performers filling in the shoes of other actors who have done this same sort of movie before them. There is Ryan Reynolds, of course, as the rookie cit. man. Then there is Brendan Gleeson (s0 good in the refreshingly original film in Bruges from just a few years back), as his long time friend and higher up. Gleeson’s character is partnered up with Vera Farmiga as another top agent with the CIA. Do any of these characters have any depth? Of course not. Farmiga, for example, keeps wanting to insist that matt Weston (Reynolds), and Tobin Frost (Washington), is working together. However, she has no reason to think or suspect this. And her stubborn willingness to keep trying to convince everyone around her of it without any reasons or merit, just seem stupid and annoying.

It is hard to recall a movie in the genre that was worse than this one. Then again, this point so over does the genre, that it is also hard to recall one in recent times that was actually good. Knight And Day, from a few years ago, was just as clichéd and ridiculous. However, that movie went for the comedic angle and was able to get some points back from that. Still it did not fail to meet every cliché in the book, just as this movie does.

How does this movie that has so little redeeming about it still manage to be watchable? It survives on the very basics of what makes any movie in this genre worthwhile. A good cast that you want to keep watching, a lot of action, and a familiarity with how much fun the movie has the potential to be. Safe house does not come anywhere close to matching that potential, of course, but it still holds your attention. Another part of it is that with the movie being so predictable, it is sometimes fun to sit through it and see if your predictions are right, and how close they come to being exactly on the nose. I know for me, I predicted a whole bunch, and as I was sitting through the movie, I kind of wanted my predictions to come true. I wanted to be able to say that I called it, and I was able to say that it was kind of fun. By the end of the movie, and I mean the final shootouts, I was even able to call exactly who would kill who and how they would do it. A movie that falls that deep into clichés does not require much thought at all, but it can still be a little enjoyable.