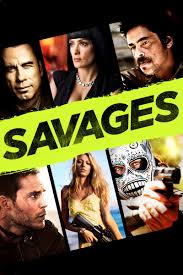 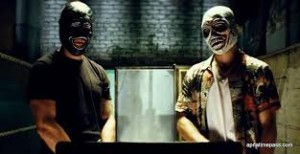 A decent drug cartel movie, but not quite the Oliver Stone comeback film that it should have been.

It’s all pretty good in savages, the Oliver stone movie about two drug dealers who go up against a Mexican cartel when the cartel expresses interest in their ways of doing business. The movie is thrilling and fun, but it could have used a little more action. Other than that, I like it. I like the way it tries to get scary and haunting as often as possible with torture scenes and scary skeletal masks (both the good guys and the bad guys wear them.) The first half of the movie is better than the second, with it coming down to a double kidnapping that is a little too simple. Other than that, everything here is good, including a top notch cast with Benicia Del Toro, Salma Hayek, and John Travolta. This is not Scarface, but it is the best thing Oliver Stone is done in a long while.

Savages are a good movie. It has a lot going for it, including a story that includes multiple twists and surprises. However, considering the talent that was involved, this movie should have been great. It is a drug cartel movie with Benicia del Toro. The last time this guy went near a drug cartel movie, he won an Oscar for his role in traffic. There is also Selma Hayek here, as ferocious as ever. In addition, John Travolta pops in for a few scenes as a corrupt DEA (Drug Enforcement Agency) agent with a sense of humor. Those are just the adults. The youngsters on hand are not quite as talented, but they are all kids with some credibility. There is Aaron Johnson from kick ass, Blake lively from the town, and Taylor Kitsch, from X-Men Origins: Wolverine.) These young actors are all giving it their best effort, and it shows. They are the ones who are more memorable here, not the older, experienced actors.

For director Oliver Stone, this movie is a welcome back to form. Stone is a very talented filmmaker who is finally back doing a movie that fits into his comfort zone. This guy goes for the jugular and does not hold back. In addition, he loves making rated R, hardcore pictures that refuse to sugarcoat sex, violence, drugs, or anything else. So a movie like this is the kind of thing he specializes in. for that reason, I am surprised the movie was not even better.

It seemed for a while, that Oliver Stone had rather lost his way. Back in the days of his greatness, he was writing the script for Scarface, and directing movies like Wall Street, Platoon, Born On the 4th of July, and the doors. Those were all in the eighties and nineties. By the late nineties, he started to get a little worse. His movies U-Turn and Any Given Sunday were good, but they were not on the same level as his greats. Then came the last ten years when everything fell apart for the guy. Every movie he made was terrible, from Alexander to Wall Street 2: Money Never Sleeps. In addition, the hope was that with Savages, maybe he would find his way back to movies like Scarface. He would get away from all the politics (JFK, Nixon, W), and get back to the drugs. And he kind of does. Only the intensity and creativity are not what they used to be.

The movie is about two guys and a girl. The guys are Ben and chon (Johnson and Kitsch). They are best friends and they are both in a relationship with a girl named O. it’s an unusual situation. All three of them are great friends. In addition, the boys are so close that they do not mind sharing O., they do not go at it with her at the same time or anything, and in fact, it often seems like she gets it on with one of them when the other one is not around. Still, they have an understanding with each other and they are all cool with it, and that is an interesting way to start the movie.

Savages begin with O (Blake lively) giving us a voice over narration about the way things is. She begins by telling about her relationship with the boys and then starts getting into the drugs. Apparently, the two guys realized that the best pot in the world was in Afghanistan, and so chon went over there as a soldier with the intention of getting some of that Afghani weed, bringing it back to the us. And using the stems and seeds to grow more over here. In addition, that is exactly what they did. Since then, they have gotten the greatest, most powerful weed in the country.

This draws the attention of a Mexican drug cartel. The leader of the cartel is Salma Hayek, with Benicia Del Toro playing her lead henchman. Hayek’s character, Elena, wants the boys to come and collaborate up with her. She wants Ben and Chon to teach her people everything they know about growing pot. In addition, she has a convincing way of introducing the idea to them, sending over a video of her people cutting off the heads of a bunch of other guys who betrayed them.

Still, the boys are not convinced. They are not stupid enough to flat out reject the cartel, but they also do not want to be partners with them. Instead, they tell Elena that she can just take over their business. They were thinking of getting out soon anyway. However, that is not what she wants. She wants to know how they do it, not to take over their client list. Therefore, she takes it a step further and has her men kidnap o. now the real storyline of the movie has begun.

The movie is the story of the guys trying to get o back. They consult corrupt DEA man Ethan, (Travolta), who actually works for them, for the cartel, and for the us. Government. This guy is being paid by everyone just to keep things running smoothly, and when he is not as helpful as the boys expect him to be, they even stab him in a car. The stab is hardly lethal, and just meant to get Ethan’s attention.

My problem with the movie is that there is not enough action or intensity. There is not as much tension as there should be. As far as I am concerned, there is only one great action scene in the movie, when the boys decide to hijack a drug shipment that the cartel is moving through a secluded area. They call in their army friends to help out, and they use explosives to blow one cartel car up at a time. It is a very cool scene, but we needed more like these in the movie.

The action that the boys finally decide upon, to get o back, is not really much of a surprise. It has hinted at or mentioned throughout the movie, and considering that it is saved for the climax of the movie; you would think it would be something more. You know how most movies have the characters come up with a plan, but then when they actually try to do it, something goes wrong. That is because if everything went according to plan, than the movie would be boring and predictable. Well, that is what happens here. The movie is not bad because of its many characters and interests. However, there just are not twists or surprises like there should have been. There is one torture scene, and I have heard it compared to the chainsaw scene in Scarface, only it is not even close. That is because in this movie it is not anyone we care about being tortured or threatened. That is the difference. None of our main characters ever faces real threat, (o is kidnapped and held captive, but her life is never threatened), and as a result, the tension is not as high as it should have been. The movie is definitely good, but it could have been even better.