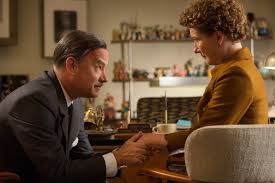 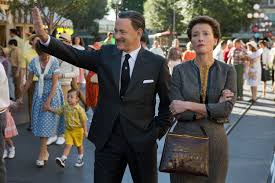 A charming and delightful movie about the woman who didn’t want to sell her mary poppins story to walt disney.

This is the movie behind the movie, and the story of mary poppins got made. it’s not so much about filming the movie as it is about Disney acquiring the rights of the story from the writer. that happens to be a very uphill battle as the writer, P.L. Travers, does not want to part with her story and especially doesn’t want to give it up to the studio behind signing animal cartoon movies. most of the movie is about travers’ interactions with walt disney or the song writers. these scenes are all fantastic. there are a couple of subplots that don’t work as well, but luckily they are hardly the focus of the film, and the scenes the occupy most of our time work out pretty nicely.

Saving Mr. Banks is a fun movie. Like Finding Neverland, Ed Wood, or Shadow Of The Vampire, it’s the story of how the movie Mary Poppins got made. The reason why this story is more interesting than others is because it was the first live action movie that Disney ever made and because the main guy at the studio, pulling the strings, was Walt Disney himself.

On top of that, this is the story of the writer of Mary Poppins, P.L. Travers, (played by Emma Thompson), and how she did not want to sell her story to Disney, more than anything in the world. She was meeting with him and in discussions only because of how important a figure he was. Thompson, in this movie, plays a character similar to the one she played in stranger than fiction. By that I mean she is an author and also a bit crazy and unhappy with the world.

A good deal of the movie involves flashbacks to Travers as a child, growing up in the country with a father who was an alcoholic and eccentric. this man, travers goff, is played by colin farrell, and he supports his daughter’s imagination, sometimes taking it a little too far. travers goff has a bit of a temper and loses his cool on more than one occasion, while supporting an idea he believes in. he’s also kind of the town drunk.

the story of mary poppins is the story of how a nanny comes in and saves the day. that’s the idea, anyway. it’s supposed to be that these flashbacks show us a story that is reflected in mary poppins so that whole scenes from one are taken and reworked in the other. only it doesn’t really work like that. for starters, the nanny doesn’t come into the story until about halfway through the movie, and even when she does, her part is very small.

it is not clear how the nanny saves the father, or if she even really does anything at all. on top of that, we don’t really get scenes from the flashbacks that play out as scenes in the story of mary poppins. only one, when the father is giving a speech about banking and investing, and we see it turned into a song by the musicians at disney studios. for that scene, we cut back and forth between colin farrell ranting while on stage, and the musicians , in the present day story, singing the same words that he is preaching.

the good news is that most of the story is about the relationship between p.l. travers and disney, or about her and the musicians hammering out new ideas for the movie, and those scenes all work out very well. we are introduced to a team of songwriters, all of whom are played by top of the line actors. there’s jason schwartzman, bradley whitford, and b..j. novak. these guys respond hilariously to travers’ comments and try whatever it takes to get her interested in their ideas.

there are a number of subplots in this movie, and quirky characters. aside from disney and the song writers, there are also his secretaries, and a driver, played by the great paul giamatti. this is one of those characters that feels a little forced and unneccessary. the idea here is that the relationship between the driver and travers changes throughout the course of the film, as she grows to accept and even like him. they bond through him telling her all about his daughter, and how she got him to read and love mary poppins.

the heart of the story is in the walt disney character and his relationship to travers. as played by tom hanks, he is a fantastic character who really tries to understand what the issue is with her and to work it out. there are a number of occasions where he brainstorms what the problem is, and at one point even asks other female employees of his to try to make sense of what travers’ might be thinking.

the real issue is that travers doesn’t want to give her story up because it means so much to her. she certainly doesn’t want to see it turned into an animated film by the studio that makes all of these silly talking animal movies. at one point there is a big issue over how to make penguins in the films which can dance, and what animating will mean to travers.

the movie is good because of the current day story. there are lots of great scenes between travers and the music writers, and then other great ones between her and walt disney. the stories that don’t work are luckily the much smaller stories. those include the subplot with paul giamatti’s driver and the flashbacks to colin farrell. while it’s never clear how the nanny really impacts their lives in the flashbacks, maybe there’s something more at play here than a simple reflection. maybe it’s about travers wishing she could have saved her father and inventing this story about a made up character who could. maybe mary poppins is the story of what she wishes the nanny could have done for her father. either way, most of the movie works and is enjoyable.