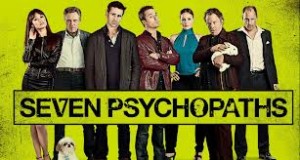 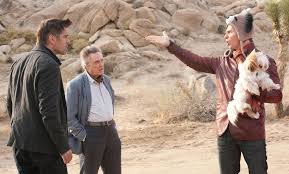 A very funny and entertaining film, this one might start to lose its focus a little at the end, but otherwise, it’s pretty terrific.

This is a really fun film, combining great humor with a clever plot. It’s the story of three friends who kidnap dogs and write screenplays. That’s generalizing a little, since each friend basically does one of those things, but the three guys (played by Colin Farrell, Sam Rockwell, and Christopher Walken), end up crossing the wrong gangster when they kidnap his dog, and that gets the real storyline of the movie started. The fun of the plot comes from the way that one of the characters is writing a screenplay about seven psychopaths, and how he figures it all out as the movie goes on. At times the movie mirrors his screenplay and at others his screenplay mirrors the movie. In addition to all of this is that whenever Marty (Rockwell) writes a new scene or Billy (Farrell) gives him one, we get to see that scene take place. There is wonderful humor in this movie, with each character being quirky in his own way, and like director Martin McDonagh’s last film, In Bruges, this one really finds the balance between violence, humor, wit, and dark storytelling.

Seven Psychopaths is a pretty cool movie. It’s a film that works on multiple levels, so that if you don’t like one thing about it, there are plenty of other things to enjoy about it instead. Those levels start with the humor and tone, and move onto the characters and the story. As far as the story goes, this film is in many ways a movie within a movie. It’s about a character who is writing a film and about how his real life ends up being filled with events that will be in the screenplay he is writing. In some cases, they already are, and he just doesn’t know it yet. In those moments, he doesn’t know that his screenplay, composed of stories people have told him, is based on things that really happened to the people telling the stories.

There are four great actors involved here, and each of them is giving one of the funniest perfomances of his career. Those actors are Colin Farrell, playing screenwriter Marty, and his best friend, Billy, who is played by Sam Rockwell. Those two guys and their friendship is at the heart of the film, but then there are two actors in secondary roles who are also great. Those actors are Christopher Walken and Woody Harrelson. Walken plays dog-kidnapping expert Hans, and Harrelson plays Charlie, the mafia boss who has his dog kidnapped.

Based on the title, trailer, or poster for the movie, one might think this is a film that involves multiple storylines and characters intersecting. Thankfully, it does not. This is a movie with a single, very specific and focussed narrative. All characters know each other and are involved in the same storyline. In fact, three of them, Marty, Billy, and Hans, even work together. Billy and Hans do the dog kidnapping together and Billy brings Marty in on the situation as his best friend. t

The inciting incident that kickstarts everything is that Charlie’s dog is kidnapped. The funny thing is, without the movie within a movie cleverness, this really would be a very simple movie about three guys who kidnapped a dog and now have the mafia boss coming after them. But instead, it’s really about a screenplay. That screenplay, which Marty is writing, is called The Seven Psychopaths, and while he has the title at the start of the film, he really doesn’t have many of the psychopaths or ideas for who they will be.

When he first starts writing and speaks to his friend about the ideas, the only psychopath he has is a non-violent Buddhist. After that he thinks of a story about a Quaker. In that story, the Quaker drove his daughter’s killer to commit suicide and then slashed his own throat so that the killer would see that he was about to follow the him to hell, and keep pursuing him there. Marty tells Billy this story, and then Billy uses it as the idea for a second psychopath, while forgetting that he got it from Marty.

Another one of the psychopaths is a guy called the Jack of Hearts. He’s a vigilante who goes around killing low level soldiers in the mafia organization. So far, with these first two or three ideas, we get to see all of them in action. The movie opens with the Jack of Hearts killing two mafia enforcers (Michael Pitt and Michael Stuhlbarg, even the tiny roles get recognizable actors), and then when Marty tells Billy the Quaker story, we get to watch the whole thing happening, flashbacks to the Quaker and what he did in the aftermath of his daughter’s death.

The humor comes from the conversations between Marty and Billy. While he doesn’t call his friend out on the ideas right then and there, the truth is that Billy actually resents Marty for taking the ideas he gives him, without acknowledging where the ideas came from. He also doesn’t like that Marty has forgotten the original source of these stories and has convinced himself that he was the one who actually made them up. Finally, Billy doesn’t like that Marty wants to write the screenplay on his own and won’t let Billy help.

Christopher Walken is the most serious one of the three, playing it pretty straight and getting laughs just because of how much he seems to not care. The other guys are the ones freaking out over everything, with Billy pushing Marty along, super enthusiastic about the screenplay his friend is writing. Billy even takes out an add in the paper calling for all psychopaths with a story to come and share it with him and Marty.

And then there’s Woody Harrelson, playing a mob boss who loves his dog more than anything else on earth. Harrelson plays this hilariously, putting his dog on such a pedastal that he is willing to kill over her. From his opening scene, where he is inches away from blowing away the dog walker who lost her, to one of his last scenes, where charlie asks the gunmen if he can give his dog some kisses and scratches, he is superb here.

Seven Psychopaths was directed by Martin McDonagh, the director of another Colin Farrell movie, In Bruges. That movie was also terrific, and just like this one, found the perfect combination of dark humor and violence. Neither movie is campy or slapstick driven, and instead, the humor comes from the writing and the actors, delivering each line just right. McDonagh is a master of dialogue where characters tell stories and often use numbers to keep track of things. Watching Wood Harrelson explain to Farrell how many more of his guys died then Farrell’s friends almost felt like something out of In Bruges with the conversation about the midget war. This guy McDonagh is clearly pretty talented, and in Colin Farrell he has found his muse. Seven Psychopaths is elaborate because of how many different characters it brings in to add to the list of psychopaths, (there’s the story of the vietnamese man and the story of the killer couple that went around town murdering serial killers.) this is very interesting and also very funny stuff. the movie even manages to change the location up for the final act, in order to give us a cinematic climax. And it has the charters discuss that, referring to it as a great spot for the final shootout. This movie works.