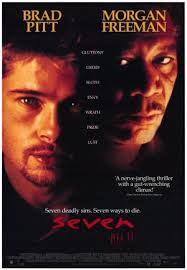 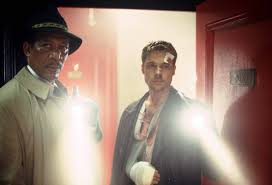 Possibly the best and certainly the grttiest serial killer movie told like a non-stop puzzle thriller.

Seven is a movie that is bathed in style and discipline. It is the single movie that might give The Silence of The Lambs a run for its money as the greatest serial killer film ever made. This movie is the first real work from visionary director David Fincher, and certainly the first one to show off his skill and unique talent. Fincher was making commercials before this. That, and Alien 3, which was ripped apart by the studio, and in no way his own. But seven was the movie that launched him, and Morgan Freeman and Brad Pitt with the guys who brought his vision to life. They played two very different and distinct police detectives both working the strangest and most elaborate case.

Freeman was the smart, older guy in his last week before retirement. He was the seen it all guy with a cynical outlook on the world. Pitt on the other hand was the young rookie, all jazzed up about what he was doing. He had worked other cases, to be sure, but never homicides and never here, in this gritty, dark, rain filled city. It’s a fictional city, intentionally never revealed to us by name, and it represents the hell that murders and trying to make sense out of criminals has become.

At the start of the movie, the detectives are at a crime scene with a dead body. It’s an overweight man, tied up and stuck in his own filth. The two detectives meet for the first time and they do not seem to get each other at all. Freeman even argues to have Pitt removed from the case. But there’s no one else to work it, and so the boys go separate ways, each working the case on their own. That is, until Pitt’s wife Gwenyth Paltrow (before she was famous, and while she was dating Pitt), invites freeman over for dinner.

That dinner changes everything. The boys laugh at each other and start to realize that the other one really isn’t all that bad. And it’s Paltrow who single handedly got them together for a meal and put them on the same page with each other.

The murders continue, one by one, and with every murder, there’s a sin carved into the wall or painted onto the carpet in blood. There are seven deadly sins and Morgan freeman is on top of each and every one of them. He’s also well versed in the kinds of literature that talk of these sins, from Dante’s inferno to Canterbury tales, to Milton’s paradise lost.

As they investigate more murders, the boys get closer and closer. They even have run INS with the killer and find his home. It’s an exciting path they travel on, and the end twist caps it all off.

There’s an unforgettable ending to this, so simple and banal and yet so brilliant. The killer is also played by a familiar face at the real start of his career as an actor, and it’s a role that is absolutely terrifying.

Both Pitt and freeman are at the top of their game here, as it was early in their careers as A List stars. This was the movie that made them, and showed what they could do, more than any other. Freeman had Shawshank, sure, but this was the movie that cemented him as an actor who was here to stay. And for Pitt, he was just breaking out, after his year of interview with the vampire and legends of the fall. Both were good, but neither a real classic. Seven was that classic, that much needed film that would be remembered and watched again and again. The movie not only launched these two guys, but also Gwenyth Paltrow and director David Fincher.

Seven is dark and disturbing and is very well made. It’s one of the best serial killer films of all time, perhaps right behind silence of the lambs, and that is because of atmosphere more than anything else. By creating his own gritty city and dirty landscape, Fincher is able to manipulate with weather and style, and use it to set the tone of his entire film. He’s a man with a vision and seven ends up hitting every mark right on the money, to make that vision come to life.