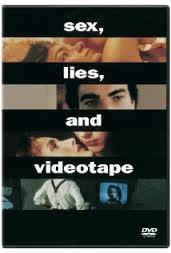 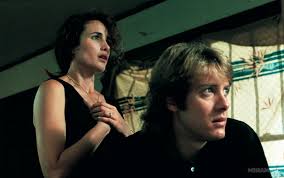 A very sexy, very interesting drama about four characters who get mixed up in quite a bit of conflict.

A very cool movie with only about four characters who interact with each other and have secrets which they are hiding. Obviously the secrets come out during the course of the film, but it’s the ways that these sectets come out and the actions characters take in response to learning them, that really keep this movie so alive. For a four character film, the movie plays it very smart by never having all four characters in the same scene at once (like the movie carnage did.) Instead, this movie keeps its components separate (there is only one scene that even has three of the characters in it), and keeps us interested with new revelations that totally fit with the natural order of the story. There’s a lot going on here, underneath the surface, and that’s part of the appeal of the film. Everything might seem so simple and modest, but the reality is wheels are constantly moving, as the characters learn more about each other as well as themselves.

Sex, Lies, and Videotape are an excellent film. It’s one of those movies, which features only four characters and feels like it could have easily been based on a play. Movies that limit the amount of characters (such as in the company of men, Glengarry Glen Ross, or older movies like cat on a hot tin roof and The Glass Menagerie,) really have to get creative with their story. They can’t rely on the usual gimmicks that other movies fall back on. Part of that is the limited amount of characters, but another part is that most movies made with such few actors also have a limited budget, which means they need to do more with less. Clerks are another example of such a film. A limited amount of resources means a stronger focus on storytelling and creativity.

For Sex, Lies, and Videotape, it is director Steven Soderbergh’s breakthrough movie, although he kind of disappeared after this film and didn’t get back into the swing of things until he made out of sight and traffic, nearly twenty years later. Still, Sex, Lies, and Videotape is the movie that showed soderbergh had talent. It took tremendous restraint to make such a bare bones movie and to do it well. Even the basic premise is simple, which is why it’s kind of remarkable that the movie turned out to be so interesting.

The premise is that there is a married couple where the man is having an affair with the woman’s sister. That’s the back-story of what has been going on so far, as the movie begins. The new element that’s introduced is that the cheating man, John, is having his old college friend, Graham, come and stay over at his place, where he lives with his wife, the charming and innocent Anne.

John is played by peter Gallagher, and we learn about the affair he is having with Anne’s sister pretty early on in the movie. Andy MacDowell plays Anne, and Laura San Giacomo plays her sister, Cynthia. The funny thing is that both of these actresses were cast before they were really known. MacDowell didn’t get famous until Groundhog Day in 1993 and then four weddings and a funeral in 1994. Giacomo on the other hand, never really made it to stardom, but certainly had her biggest film just a few years after this one when she played the best friend to Julia Roberts in pretty woman. Perhaps Sex, Lies, and Videotape were one of the major reasons she was cast in that part.

Having graham come to stay over with john is the fish out of water part of the story. We don’t get to it right away. In fact, we start off by getting to know our three main characters that are already living here, in the town. The movie opens with Anne talking to a psychiatrist about her worrisome thoughts regarding where all of the garbage of the world is going. This conversation might seem insignificant, but it actually has a lot of symbolic meaning. Anne is a good girl, concerned with the problems of the world. She represents purity and wants to get rid of the garbage that is out there (cheating husbands?)

Graham comes to town and meets Anne before he sees John. The interaction between he and Anne is a strange one, with Graham having false alarms about needing the bathroom and things like that. Anne can tell right away, as can we, that this is not a very normal person. Graham seems to be an outsider who does things his own way and does not care what others think of him. In these ways, he’s the exact opposite of John. One thing kind of funny about this portion of the film is that there is very little time spent between the two friends, Graham and John. They have one meal together, with Anne there, at the table with them, and then that’s about it. Of all the characters in this movie who interact with Graham, John is the one who does it the least. That works for this movie staying unpredictable. When you hear this is about an old friend coming to town, the first thing you expect to see is a scene between the two friends catching up with each other.

Graham gets a house in town and Anne goes to see him. That’s a clue that this movie is different right there. It isn’t John going to see his buddy, but Anne. Has she become a better friend to graham than John is? It seems that way. It seems like either graham or john is not the same person who they were in college and somehow the two of them have grown very far apart. It’s while Anne is paying this visit to Graham’s new place that she discovers his tape collection. Her curiosity gets the better of her and she questions him about the tapes, over and over again, despite his attempts to hide what they are really all about.

The tapes are interviews with women, discussing their experiences with sex. They involve everything and anything that each woman wants to talk about or do. None of the women touch graham, but some of them touch themselves, and all of them open up to him. When Anne tells her sister, Cynthia, that john’s friend, graham is a little weird, it is all Cynthia needs to go over there and check him out for herself. She is the adventurous one, looking for new experiences and ways to keep life interesting. Sleeping with john just isn’t cutting it anymore.

Cynthia makes a tape with graham, and then she returns to john. The only reason for this return is because John has finally given in to helping Cynthia fulfill her fantasy. This fantasy is to do it in her sister’s bed. She wants to really walk on the wild side, and risk getting caught and all that dangerous kind of stuff. Once she gets that, however, she no longer has interest in john. She has gotten what she wanted. As if that wasn’t enough, this new guy, graham, is a lot more intriguing than the old guy who is just doing the same thing he always was.

Something that Cynthia did in the bed of her sister ends up coming back to haunt her, and that’s what puts into motion the events that will play out for the rest of the movie. It’s a really strong film for many reasons, and one of the main ones is the screenplay. There is some very good writing here, making everything seem simple on the surface, while actually having some deep levels underneath everything we see. In this movie, the events and situations unfold into each other, and every one of them makes complete logical sense. For example, Cynthia doesn’t just happen to decide to stop seeing john now, because it fits the plot. She stops because she finally gets what she always wanted… doing it in her sister’s bed. And then this leads to her leaving something behind, and the story movie forward in response to that. It’s a very good and very smart film, handled with precision.