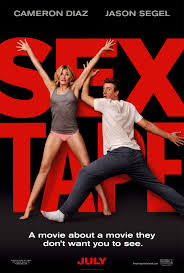 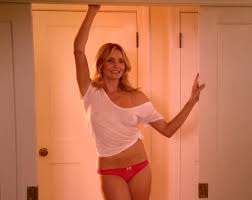 A very dumb and unfunny movie that luckily does keep the viewer wanting to know how this awfulness will end.

Sex Tape is a movie that was made based on a single simple and unfunny joke. The joke is that this married couple makes a sex tape and through the wonders of iCloud, it sinks to everyone’s iPad that they ever gave away to anyone. So now they have to go chasing the tapes down. Only they don’t really do that. They go to two houses and then stop in search of another and even more terrible idea involving breaking and entering. The movie has some things that do work nicely, like its introduction and setup, but really all of those things occur in the first half. Once the film becomes about them setting out to get the tapes back, the whole thing starts to get worse. When they get to Annie (Cameron Diaz’s) boss’ house, the movie has reached it’s low point. There is no recovery after that.

Sex Tape is a lousy movie. It always looked like a one joke film from the trailer, and no surprise, that’s exactly what it is. The single joke that they somehow made into a feature length film here, is that a couple makes a sex tape and then it gets out to the public. Only it doesn’t really get out to the public. It gets out to all of their friends. And they then have to spend the rest of the movie trying to track all these tapes down. Now, even that brief description is a whole lot better than this movie actually is. That’s because our characters don’t actually go all over trying to get the tapes back, but instead only go to about two houses. If they went all over, then maybe we would have gotten a wide range of comedic and crazy situations. Maybe even some montages to help do more in less time. Instead, this thing spends way to much time at the bosses house, to the point where it feels like it is just wasting time in order to get to the end.

The movie opens with Annie (Cameron Diaz) giving us a voice over where she says, “When was the last time your husband saw you naked.” This quickly goes into some shots of her and her husband, Jay (Jason Segal) trying to rush around the house getting their kids ready for things. Then Annie switches over the topic, by asking “The first time?” This is the movie’s clever way of showing us a bunch of back story for what the two of them were like when they first started doing it together.  Really it’s not what she’s asking, about the first time they saw each other naked, but actually the first time they had sex. Still, it’s nice to get this level of back story at the very beginning and that the movie finds a creative way to do it. That way is to have this whole voice over monologue be part of a blog that Annie is writing. By the end of that opening, we not only know all about what Annie and Jay’s current life is like, but also what they used to be like when they first got together.

If only that level of ambition continued throughout the film. Following the opening montage, we start learning about Jay’s business and all of a sudden the movie becomes routine. He is a music producer who gives away iPads as presents. The idea is that he is always getting new iPads for his job, so he just gives the old ones away. And people love the playlists he makes, so he gives them to these people with all of his playlists on them. But there’s a new feature these iPads now come with, through iCloud, where they will automatically sink with Jay’s personal iPad that he has at home, so that anytime he makes a new playlist, it automatically goes to everyone’s iPad that he ever gave one too. All of this is kind of cool, and is a nice setup for how the sex tape could end up sinking to everyone else’s iPad. Now, realistically, Jay would be aware of this gimmick he has going, enough to know not to use his iPad to make the sex tape. The fact that he does it is ridiculous. Still, it’s one of those things we can just go with and ignore.

After everything about Jay’s work is established and we also learn that his son is making a video on his iPad for his school graduation, we get back to the story of Annie and Jay and their romance. Apparently all of the passion is gone. They haven’t had sex in ages. They try setting up dates to do it, but end up breaking them when something else more important comes up. This all leads to the big night. Annie has her mom take the kids for the night and surprises her husband. He comes home and is blindsided by his wife dressed in her underwear, a revealing t-shirt, and a pair of roller-skates. Now, at this point, the two of them might role play or something, but more than likely they would just start doing it. Especially after how long they have been waiting for this opportunity. But instead, they decide to make a sex tape. And not only that, but they get out a book called “The Joy of Sex,” or something like that, which features every position imaginable. And they try to do them all. Maybe this is supposed to be funny, but it really isn’t. It sounds incredibly unpleasant, trying to do them just to do them, instead of actually enjoying them.

To the movie’s credit, it does show a good amount. Sure we don’t see Cameron Diaz nude, but the movie also doesn’t cut corners and only show us neck up or something, the way some other films might have. It also doesn’t rush over the sex scene. That makes a difference. And not long after they are finished making the tape, does Jay get a strange text message on his iPad. Someone has seen the tape. Jay checks his computer. Sure enough, the software that he uses to send out playlists has now sent out his sex tape. He tries to hide it from Annie, but can’t cover up his expression, and she gets it out of him pretty quickly. There’s lots of talk about the mailman having one of these iPads, and every time Jay mentions this man, Annie hits him. It’s not funny at all.

At this point the journey of the film begins. The setup is over and so is the problem. Now it’s time to deal with it. Annie and Jay go over to the house of their closest friends. These friends are Robby (Rob Corddry) and Tess (Elle Kemper.) Annie and Jay show up unannounced as a pop-in and sit down with their friends trying to have a conversation. Really what they are trying to do is figure out if their friends saw the tape. When it seems like the answer is yes, Annie and Jay let it fly that they want the tape back. At this point, of course, Robby reveals that he has no idea what they are talking about, and Annie and Jay end up telling the couple all about the tape. Sure, it’s a little bit funny how Robby doesn’t want to give the iPad back so easily, and wants to watch the tape, but for the most part, this storyline is pretty simple and predictable.

Then the movie gets even worse. At this point we have pretty much reached the second half, and the movie takes a turn that it never recovers from. All four characters (the two couples) now go over to Annie’s boss’ house. Why they would bring the other couple with them, I have no idea. And to compound the stupidity, Annie and Jay ring the  doorbell of the boss, Hank, (Rob Lowe), pretending to be working for a charity, going door to door, and don’t even have the name of a charity in mind. So they have to make up a stupid sounding charity on the spot. Boy, never saw that joke before. This is beyond dumb. It would have been funnier if they broke into the Hank’s house than watching this.

Things only get worse. Annie and Jay get invited into Hank’s house, and Jay sneaks off to look for the iPad while Annie and the boss sit down to talk. She ends up doing cocaine with him while Jay gets chased around the house by a ferocious dog. That dog ends up biting the hell out of Jay, leaving him all kinds of bloody, but none of this is funny, or original at all. It is so routine and cliched that it’s hard to believe any movie with Jason Segal’s name to it would attempt this stupidity. Segal is a writer as much as he is an actor. He wrote his breakout movie, Forgetting Sarah Marshall, which was great. He also wrote the 5 Year Engagement and now this movie, both of which were pretty terrible.

After escaping Hank’s house, the movie finds a whole new challenge. The person who sent the original text message is blackmailing them. Now the movie is suddenly a mystery. It’s actually a nice twist, spicing things up a little, until we realize who it is that is blackmailing them. That reveal doesn’t work at all, and neither does the climax, where they try to get their tape back and go about it in the worse and dumbest possible way. It’s one thing to break into someone’s house, but what these guys do in order to get that tape back, breaking into a highly secure location, is totally ridiculous.

Sex Tape is a movie that just gets worse and worse. The first half isn’t half bad. Sure there’s nothing great about it, but at least that half takes the time to find interesting and clever ways of doing things. I like the introduction and how much story they are able to find ways to pack into a very small amount of time. I also like the whole iPod playlist, transfer situation. But starting with the making of the sex tape, the movie goes downhill. When it reaches the halfway point, where they set out to recover the tape, it suddenly becomes a straight plummet. between Hank’s house, the place they break into, and a school graduation scene that is beyond awful, this movie really falls apart hard.