Sherlock Holmes: A Game of Shadows **1/2 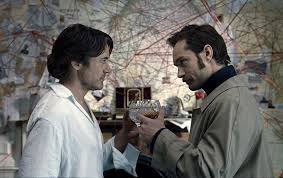 Not nearly as good as the first film, this one only picks up in the second half, but then gains our interest and becomes somewhat worthwhile after all.

It just isn’t as good as the first movie. Not even close. Sherlock Holmes: A Game of Shadows is a movie with a somewhat dull plot and an occasionally decent action scene. everything the first movie had going for it is not done nearly as well here. So, the humor, for example, and witty banter between Holmes (Robert Downey Jr.) and Watson (Jude Law), is still there, but it isn’t even close to as funny. the same goes for the dark and dreary atmosphere. The villain is meant to be scary, but how can you get much scarier than mark strong’s cult leader who practiced black magic and was supposedly dead? Jared Harris, playing Moriarty, and dealing in arms and bombings, doesn’t make the cut. the movie is by no means terrible, but it just isn’t anything that stands out. even the action feels computerized and fake, as if the speeding down of bullets and stop motion freeze frame were something new. it’s the exact same technology that was used in the matrix, well over a decade ago. The train sequence in this film is a lot of fun, and so are some of Holmes’ disguises, but none of that is enough. the plot is pretty thin, and this is hardly a worthy sequel to a first movie that got so many things right.

Sherlock Holmes, the sequel, with its pretty lame title a game of shadows, didn’t work. yes, there were things in there to catch your eye and make it in some ways worthwhile, but overall the film was a mess. that’s because it’s plot was actually very simple, save for a few complications at the end, and not really mysterious at all. on top of that, the action was lousy. there wasn’t one single memorable action scene in the film. And finally, and most importantly, the first half of the film was extremely boring and uneventful.

When I saw the first Holmes movie in theaters, back in the winter of 2009, I didn’t care for it. I was wrong of course. very wrong. But on a first viewing there was a lot to take in, and I wasn’t really captured the way I was hoping to be. Maybe it was because I was looking for something more gangsters, like director guy Ritchie’s other films. but this was something different. It was dark and creepy, like most of Ritchie’s work, but it also had a very scary edge to it with a villain who might or might not be dead and also ran a cult. that villain, played by mark strong, made the movie. but aside from him, there were plenty of funny moments and great action scenes. My favorite combined both action and comedy as Holmes ran around with an electric rod, zapping a huge guy, every time the two of them caught up to each other.

there’s nothing in the sequel like that at all. not in action and not in the villain. And that’s kind of sad, considering that the villain of this film, Professor Moriarty, was built up so nicely at the end of the first movie. The first film ended with talk of Moriarty and how he was nearby, and it reminded me of the end of batman begins, with batman and commissioner Gordon on a rooftop talking about the joker. you knew these scenes were setting up the sequel and announcing who the villain would be, and you knew the villain sounded cool.

But professor Moriarty (played by mad men’s Jared Harris) isn’t. First of all, when it was announced that the villain in the sequel would be Moriarty, people immediately started speculating about who would be playing him. Daniel Day Lewis’ name got thrown into the mix. Now they didn’t need to get day Lewis, but Jared Harris? that’s the best they could get? What about Michael Caine or Ben Kingsley? Somebody who actually brings something to the table, just in their presence alone.

There isn’t anything scary about Jared Harris, especially not when the movie is coming off a previous film with a villain as dark and evil as mark strong played. And the plot here is really not mysterious at all. Moriarty is manufacturing huge weapons and then he’s trying to turn other countries against each other so that he can start a world war. If war breaks out then the countries will need his weapons and he will suddenly be rich. it’s a little trivial. And it also sounds like a plot we’ve heard a thousand times before, mainly in James bond sorts of movies. aren’t the villains in those movies always trying to start wars, by making it look like countries struck each other? I remember tomorrow never dies, one of the better Pierce Brosna bond films, where the motivation was about selling newspapers. At least being a weapons manufacturer has that beat. but it’s still not very scary.

The movie starts with bombings going on between France and Germany. Both sides keep bombing each other in public places, and Holmes figures there’s something going on here, behind the scenes. he goes to an antique show where he intercepts a letter that was meant to kill the man who opened it. Holmes then begins to trace the letter.

He is lead to a gypsy woman (Naomi Rappace, from the Swedish Girl with the Dragon Tattoo movies), who also received a letter, and who knows that the letter has something to do with the disappearance of her brother. Holmes, Watson, and the gypsy team up to get to the bottom of this whole mess.

There are action scenes, here and they’re, sprinkled about, but not one of them is very good. There’s Holmes at the gypsy’s fighting off assassins that were there to kill her. Then there’s the train ride, where Moriarty men fire loads of bullets through the cars, but never hit a thing. what a waste of ammo. even the best action piece of the movie, where the characters run through the woods as massive rounds of gunfire come soaring through the air at them in slow motion, is something we’ve seen before. the movement freezes as the characters run and then suddenly bullets go whizzing by through the frozen screen, striking things like trees and splintering them. The whole frozen movement while a bullet goes by and connects with something is right out of The Matrix. Specifically the scene where Laurence Fishbourne was held prisoner and a helicopter showed up at the window and started firing away. everyone ran, the screen froze, and bullets went flying through the air, one even hitting a puddle and sending the water splashing until it froze along with everything else. And this is the highlight of the Holmes film.

now just because we’ve seen it before doesn’t mean it’s not cool. And that woods scene in the Holmes movie is still kind of cool. but it’s also not really anything special. and that’s pretty much the story with this movie. even the good stuff isn’t all that good. the final scenes of the movie pick things up a little, but it’s not enough. and don’t even get me started on what ends up happening to the main villain. let’s just say the movie finds a way to not supply us with any answers, which is probably the laziest thing it could have Possibly done.

No, I did not care for this movie. The witty banter between Holmes and Watson is gone and Holmes really doesn’t seem here to be very smart at all. Sure there are a few chuckles every once in a while (I do like Holmes’ elaborate disguises where you don’t even know he’s there, in the room,) but with that comes a lot of dull, boring conversations. the action is limited here and not very exciting. now it is a film that one can sit through without problem simply because the actors are likable and because it is an action picture after all, but it is still not very smart and not very good.