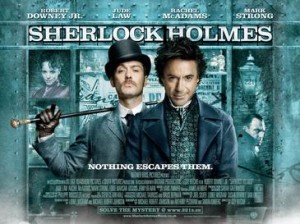 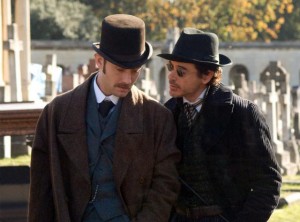 A very funny, very stylized detective film with a clever storyline and some fantastic action.

Sherlock Holmes, the guy ritchie version, was a movie that cleverly utilized everything the filmmaker had so far learned in his career. The humor of his previous movies, going all the way back to Lock, Stock, was evident in nearly every scene. The action was fantastically quick paced and well choreographed. The ideas and explanations were distinct, but clear. And the look of the film and music were perfectly orchestrated to fit the mood and tone that ritchie was going for.

The movie was about the wonder-boy detective who sees clues everywhere he goes just by making constant observations of things that most people wouldn’t notice. He’s the guy who thinks ten steps ahead, and ritchie does a wonderful job of showing us that early in the film with two fights in which holmes plans out in his head exactly what hits he will give his opponent to create maximum damage, and then proceeds to follow through with his plans.

The storyline begins with holmes (robert downey jr.) and his partner watson (jude law) solving their final case together, arresting lord blackwood (the eerily creepy mark strong) and sending him over to the police to be hanged. All seems fine as holmes and watson are now done with cases and watson prepares to move on to marriage with a fine young woman.

holmes goes to meet this woman at dinner one evening, which makes for an entertaining scene as he both insults her and demonstrates his skill for putting clues together. but aside from that night, holmes stops doing anything social and he stops working cases. He goes three months without a case that interests him and that’s when rachel mcadams shows up.

She’s a former lover of holmes’ and apparently the only one that’s ever outsmarted him. Twice. ANd now she brings him a case about a missing person. holmes takes the case and almost immediately after learns that blackwood may still be alive. A groundsman at the graveyard saw him walking around. When they look in his grave, they find the missing person that mcadams was looking for.

The case takes the two boys into the world of both science and cults. Blackwood was part of an order that claimed to have magical powers and holmes is out to discover their secrets. But at the same time, more people are dying. Anyone who crosses blackwood or gets in the way of his plans finds themselves either killer or put in harms way.

The mystery is a lot of fun with holmes and watson bouncing ideas off each other in order to put the pieces together. They find science experiments that were being worked without completely knowing what the people running them were up to and have to figure things out for themselves. And they are often confronted by aggressors, men who come back to cover their tracks, catch holmes and watson therE, and now want to fight.

Rithcie does a fabulous job creating environment in this film with gritty action and limited colors. Mostly grays and whites. London is a foggy place filled with puddles here, and ritchie captures it well. He also gets very creative with his action, finding humor in the way his characters move. Early on, Holmes participates in a bare knuckle boxing match (last seen on film in rithcie’s own movie snatch), and gets to show off a little there even though the scene has nothing to do with the mystery and story line. All the better. It’s like bonus. And then there’s another fun scene where holmes takes on a man who is something of a giant, and finds an electric fork to run after the man and shock him with. And each shock sends the man flying. It’s very creative.

I also love how ritchie sets this movie in a real time period and talks about not only what was going on in the world at that time, but also how these people might reflect on history. His villains in london talk of taking back america, which was once their colonies. They talk of how america is now week because of the civil war. And in london, it is the time of the building of the london bridge, the first suspension bridge ever built. And all of that is just background material to what’s taking place on the surface, which is holmes and watson insulting each other, having fun, taking on enemies, and trying to solve a mystery. It’s a pretty great movie, filled with gritty atmosphere and plenty of fun ideas.