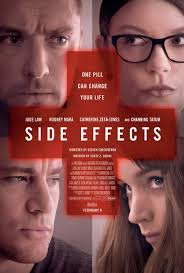 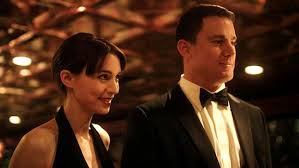 A very cool, very twisty movie that gets a little too convenient at the end, but is otherwise an enjoyable thrill ride.

An eerie psychological thriller, this movie is about deception and mind games as much as it is about anything else. Jude Law plays a doctor who gets involved in something that goes much further than he was expecting when he prescribes a new kind of pill to a woman who is dealing with depression. The woman has a lot going on in her life right now, including having a husband who was just released from prison. When things don’t work out as planned, suddenly everyone finds themselves at risk, and someone has to take the blame for what went down. Director Steven Soderbergh uses that unique style and creepiness he does so well (Bubble, Haywire) to bring us a movie that is as beautiful to look at as it is haunting to experience.

Side Effects is a dark and edgy thriller by master director Steven Soderbergh. I don’t love everything Soderbergh does, especially when he tries his hand at comedies, (The Informant), but there’s no question this guy is talented. And like director James Mangold, he’s a genre hopper, always experimenting and trying new things. He seems to do the crime / action / mystery angle the best, whether it’s on the small scale (Bubble), or on the big scale (Traffic, Out Of Sight), or somewhere in between (Haywire). Luckily, side effects falls right into that area of the kinds of movies that he handles so well.

The film is about a woman whose husband is being released from prison. That’s how the storyline begins. it actually starts before he is released, with his wife, Emily (Rooney Mara) going to see the man (Martin), in prison for her last visit there. She goes to work and speaks to friends about how he is going to be getting out, and how that feels for her. And then he does get out and comes home, and Emily has to adjust to a whole new way of life.

That’s when Emily drives her car into a wall. It’s a brick wall in a parking garage, straight in front of her, and she never hits the breaks or makes any attempt at stopping. She’s doing it on purpose and the question is why. Apparently she’s incredibly depressed and the doctor at the hospital, Dr. Banks (Jude Law), releases her to her husband, Martin (Channing Tatum), under the condition that Emily comes to see him in his office, a number of times a week.

There are other scenes that show Emily’s depression, such as a party scene that Martin takes her to, where Emily ends up breaking down and needing Martin to help her leave. She starts taking lots of pills prescribed by her doctor, and doesn’t always react so well. At work, she finds herself running to the bathroom to vomit, and while waiting for the subway on a platform, she gets dangerously close to falling on the tracks.

This is all in the first half of the movie. Dr. Banks goes to see Emily’s old therapist, Dr. Seibert (Catherine Zeta Jones) looking for answers, but he doesn’t really get anywhere with that. While all this is going on, a pharmaceutical company with a lot of money hires Dr. Banks to work for them, offering this new medication to patients for free, so long as they will be a part of his study. He is suddenly making a lot of money and on top of his game.

Then suddenly one night, Emily does a little sleepwalking that leads to murder. This becomes way more complicated then it initially looks when her treatment gets put under the spotlight. As a detective points out to Dr. Banks, either she intentionally committed murder or she’s the victim of her medical treatment, in which case her Doctor very well might be at fault. He has his records taken by the lawyers and detectives and has to go through lots of questioning about why he released Emily from the hospital so easily, and why he prescribed certain medications for her.

The second half of the movie is when all of the twisty things start coming out. There are lies and deceptions and not everything is what it seems. Dr. Banks gets thrown for a roller coaster ride and his career takes a major tumble. Suddenly he is being hounded by photographers, his patients are dropping him, the drug study team fires him, and his life becomes an absolute mess. Even his wife leaves him after a mysterious briefcase full of photos shows up at her door.

This movie is very carefully constructed. The more the first half introduces us to things and sets up the plot and characters, the more we feel the effects when everything starts crumbling down. The second half of the movie might be where all the excitement happens, but the first half is still far superior. Chalk it up to the setup and anticipation of what’s to come being much better than the actual event that finally arrives.  The first half of the movie carefully manipulates us and leads us along. We follow Emily through her hazy life, knowing that something bad is coming, and yet we are still stunned and caught by surprise, when it actually happens. Rooney Mara plays this character perfectly, being incredibly menacing and creepy, while also subdued and depressed.

For the directing of the film, Soderbergh really does a nice job with this movie. He loves using yellow-orange lighting, (just like David Fincher does,) to certain kind of extra creepy effect. Soderbergh uses it to make his films look more indie. Fincher uses it to make them look more scary. In both cases, the effect works. Soderbergh used this same technique in Traffic, The Limey, Bubble, Haywire and even in some of the scenes of his Ocean’s Eleven movies. Here, the way he uses it is extremely effective in making us uncomfortable and keeping us glued to this world and to what will happen next.

Lots of filmmakers get worse as they go on. Their best movies are their breakout films, and then they kind of coast along after that. Guys like Francis Ford Coppola or Darren Aronofsky will never make a movie as good as some of their earlier films. Soderbergh is different. He might never make another film that can compete with Out Of Sight, (his absolute best,) but his recent movies are all pretty good. He’s certainly not someone who is comfortable coasting along, and even when his movies don’t quite work, because they are too experimental (Full Frontal, The Good German), they still manage to be interesting. Side Effects is better than those other films. The movie does lose some steam as it nears towards it’s conclusion with plot threads lining up a little too conveniently and characters turning on each other and believe things too easily.  Even still, this is a hell of a movie. And for Soderbergh, it is one of his best thrillers.