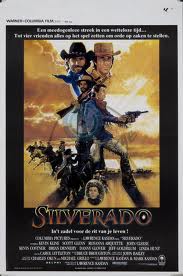 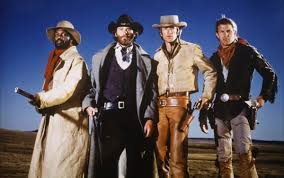 A fantastic western, this one combines cool action with heartfelt and humorous storytelling.

Silverado is a western packed with characters and conspiracy. It’s got a story that unfolds as each of four members of a team are brought into the fold, one at a time. There’s a lot of back story here, for both of the two main characters, and that goes a long way to giving grudges to characters who want each other dead for things that happened in the past. The music here is first rate and the action is pretty great too. This is a top notch western loaded with different storylines and creative ideas.

Silverado is one of the greatest westerns of all time. It’s a movie that works as an ensemble piece, closer to the magnificent seven than to anything featuring john Wayne or Clint Eastwood. There are only four lead characters here, which makes it easier to spend time with them and see their differences, than most teammup movies (from The Magnificent Seven to The Dirty Dozen to The Great Escape). But aside from the characters, the action is fun and the story keeps moving in different directions, making sure that we stay engaged at all times.

The movie opens with one of those fantastic beginning scenes that balance out quiet art with sudden excitement. Once upon a time in the west (what I consider Sergio Leone’s best western, even better than anything in the man with no name trilogy), opened with an amazing artistic, quiet scene that turned deadly, and Silverado is on the exact same path. Here, it’s in a little cabin where our hero is surprised by an ambush and has to shoot his way out. That hero is Emmett, played by Scott Glenn, and his walk out of the cabin and into the countryside is pretty amazing. The camera follows him out, and we move to the open landscape just as he does, going from enclosed darkness to glorious light and opened landscape. It’s kind of a companion piece to the end scene of the searchers, with the camera moving into the dark house while john Wayne stays outside. Here, in Silverado, it brings us out into the world of the film with the music swelling up right as we see the beautiful western landscape.

Emmett might be our first character, but it’s no sooner then when he rides off from here that we meet our second. This is Paden, played by Kevin Kline. Paden has been ambushed as well, but by a different group, and he has been left out in the desert, lying there with a rock as a pillow, dressed only in his long johns. Emmett gives Paden water and helps him up, and the two men ride into town together sharing stories.

Both men have some very interesting back-stories. In Emmett’s case, he killed a man who was about to kill his brother, Jake, and then did a number of years locked away as a result. The man Emmett killed happened to be the father of a now powerful figure named mckendrick, and the word on the street is that there is some bad blood between that man and Emmett right now. All of that comes up later on in the film. First we take a trip into Paden’s back-story, as the boys arrive in a small town and meet Cob and Tyree (Brian Dennehy and Jeff Fahey,) two men who used to ride with Paden back in the good old days.

There’s something suspicious about cob and tyree. Maybe it’s that they happen to be in the same small town as one of the men who stole Paden’s horse and that Paden rushes to buy a gun and kill this man. Maybe it’s the way Cob seems more amused by Paden’s troubles than he does sympathetic. And Tryee certainly looks and acts scary with his low grumble of a voice and the way we see chains being taken off his legs, releasing him from prison the very first time we see him.

Emmett and Paden make their way into a bigger town where Emmett is supposed to be meeting his brother, Jake (played by a young Kevin Costner who is having tons of fun with the role, hamming it up as a loose-cannon wild man.) when Emmett and Paden sit down with the Sheriff, (played by john Cleese,) they learn that Jake is actually in prison awaiting his hanging. There’s certainly a lot of prison talk between Emmett’s past, Tyreee, and now Jake. The movie is smart to only show us one of those characters actually in prison though, and that’s Jake. This way even though it’s spoken about again and again, the idea still doesn’t seem overused at all.

When Paden finds himself killing another man, (this one for his hat), he also gets locked away with Jake and Emmett has to help bust them out. That’s enough for them to immediately have to ride out of the town, and they get a little help defeating a posse by a man who they saw run out of town himself, because of the color of his skin. That man is Mel, played by Danny Glover. He’s an extremely likeable character, like Jake, and in Mel’s case it’s because of his loyalty and desire for friendship. Whether it’s helping the guys out when the posse comes after them here, or saving Emmett from a trap that would have surely killed him, later on, mal is the guy who is always there when you need him.

The boys make it into Silverado, and this is where the second half of the movie begins. They have been through a lot already, including a small mission where they found a gang’s hideout, infiltrated the gang, and stole a chest of money (which was stolen by the gang from a group of peaceful farmers.) once in Silverado, we meet a number of new characters and also come across some returning ones. Stella (Linda hunt) is the local bar maiden and her partner Kelly (Richard Jenkins), helps her run the place. Cob is both the sheriff and the bar owner. When he gets tired of Kelly stealing, he fires him, hires Paden to replace him, and then tries to convince Paden to turn his back on his friends.

There are conspiracy elements that build up as the film goes on. Mel goes home to see his father and this stirs up a whole bunch of trouble for his family, but back in the town, things are simultaneously getting just as bad. Mckendrick isn’t happy that Emmett and his brother have come to town, and he commissions cob to do something about it. Jeff Goldblum shows up as a gambler who is dating mal’s sister, ray, and quickly sides with the villains in the town. There are a lot of characters here, but it helps that they all have memorable short names (Slick, Cob, Tyree, Kelly, Stella) and that they are pretty much all played by famous actors with recognizable faces.

The conspiracy reaches it’s most suspenseful moments with a house fire and kidnapping and that leads us into two different climaxes. The first is an attack on a house out in the country, and then the boys ride back into town to put it all to rest and take out the garbage once and for all. These two climaxes don’t work as well as the film was hoping for, mainly because the return into town feels so short and rushed. Each character has only one quick scene. For mal, it’s just helping out his sister. For Paden, it’s just a quick shootout with another man. A better move would have been to strip the house attack in the countryside and devote more time to the town fight. Still, it’s a minor complaint in an otherwise pretty enjoyable film. There are small things that go overboard, like that or like the campiness of how Emmett reacts to hearing about the kidnapping, but if you suspend believability every once in a while, this movie turns out to be very entertaining. It doesn’t hurt that there’s an amazing theme song repeated throughout the duration of the film either.