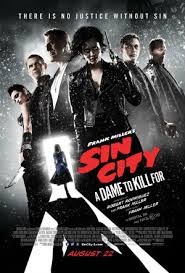 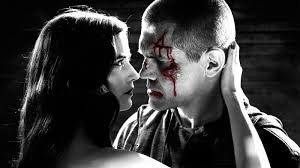 Unable to capture the creativity of the original, this movie has weak storylines, poor use of color, and effects that feel like we’ve seen them all before.

A lousy movie that has nothing new to offer, sin city: a dame to kill for really just wants to be exactly like the original. Only it doesn’t even get that right, fumbling with the parts that made that first movie so good. Instead of three distinct storylines here, the lines are often blurred and marv (the one character and actor returning from the original film), isn’t even given his own story. Instead he teams up with characters in two different stories and that ends up causing more problems. stories two and three feel way too similar. And story one is the worst of the bunch, with there being very little point to what happens with Johnny (Joseph Gordon Levitt) and his hot streak at cards. this movie does have some redeeming qualities, like a cool prequel for story two, but mostly it is pretty dull.

Sin City, the 2005 Robert Rodriguez groundbreaker, was a modern masterpiece. that is to say that for what it set out to accomplish and what it was able to pull off, the movie was unstoppable. it melded comic book structure with cinema in such a flawless way that whole panels from the graphic novels seemed to pop right off the pages and onto the screen. sin city is the reason why 300 and watchmen were able to be made. it was the single movie that paved the way. and it told three distinct stories, each great in their own right, with only minimal crossover. the sequel film, sin city: A Dame to kill for, is unfortunately not able to pull off the same creativity in any way.

there were lots of things that made sin city work, and they all seem to be absent from the sequel. the first of these is the storylines. in the original film, there were three heroes and each of them had their own story. There was Marv (Mickey Rourke), dwight (Clive Owen), and Hartigan (Bruce Willis.) in this sequel, Marv and Dwight are back. Dwight, now played by Josh Brolin.) the problem is, of these two characters, only one of them gets a really story all to himself. that would be dwight with story #2, the one that the movies title is based on.

the first story is all about joseph gordon levitt. after that, the second story features dwight and his getting help from marv. then there’s the final story about nancy, where she also gets help from marv. so the one character (played by the same actor) who got his own story in the first movie, marv, doesn’t even get his own story here. that ends up being very detrimental to this film. especially since the character who kind of replaces him, the joseph gordon levitt character, is so weak.

part of the problem is that the movie gets off to a very weak start. the joseph gordon levitt character, johnny, is not only a lousy character, but he’s got a pretty bad storyline as well. this is the story about a guy who goes into the back room of the strip club for a big night of poker. he beats the boss (roark), played by powers boothe. now roark comes after him. he has his men kill the girl who johnny is with and beat johnny up pretty bad. johnny comes back to play roark in poker again, and beats him again. the point is that this is the only way johnny can hurt the big boss, by embarrassing him at cards. that one punchline is what this entire story is based around. it’s pretty weak.

the other two stories are both significantly better. for one, they both reprise characters from the first movie. that’s what you want to see in a sequel. the dwight story is actually more of a prequel, showing what the character’s face was like before it got changed. in the original sin city, there were lots of mentions of how dwight looked different and changed his face, every time clive owen showed up. here, we get to see the events that led up to this face changing. another indication that this story is a prequel is what happens to the villain known as manute. he was played by michael clarke duncan in the original, with a gold ball for an eye. here the character is played by dennis haysbert (who encaptures duncan’s energy and voice perfectly), and at the start of the story, he’s got both of his eyes. we see how that changes.

the dwight story isn’t anything special, but what’s cool about it is that marv and dwight team up to take out the villains together. this was the sacrifice of not giving marv his own story. i would not have had as much of a problem with it, if they story they replaced him with was better than the johnny-joseph gordon levitt one. still, the second story is much better, as dwight gets betrayed and framed by a femme fatale. this is eva green, working whatever man she thinks can help her. first it’s dwight, then it’s a cop (played by christopher meloni.)

the best thing about the dwight story is the way it connects to the original. i love that it shows how and why he changed his face. i also really like that when he takes the bandages off, dwight looks a lot like clive owen. the only thing that would have made it better is if owen really did come back for the ending of this story. it would have been nice to see dwight look just like owen when he took the bandages off. still, it’s by far the best of the three stories, because of everything it attempts.

the third story is the one about nancy. this is the story where hartigan (bruce willis) makes appearances as a ghost. he is a spirit that nancy still sees and talks to. nancy decides to go after the guy who put her man down. senator roark. that means she needs to recruit marv’s help in order to break into roark’s mansion. now there are a couple of problems with this. first off, we just saw a story very similar to this. in the last story it was marv and dwight breaking into a mansion to save the day. in this story it’s marv and nancy.

the other similarity is that both stories are spawned on by a woman needing help. first it was ava (eva green) and now it’s nancy. as if it’s not bad enough seeing two very similar stories in a row, both of these stories seem to be a copy from the first film where marv broke into a mansion in order to kill a corrupt priest. only in that movie, not only did each hero have his own story, but there were also tons of villains. in that story alone, there was the priest and his canibal assistant, played by elijah wood. then there was also the yellow freak (played by nick stahl), and benecio del torro’s corrupt cop turned thug. four villains, plus roark. in this sequel, there are only about two villains, and roark is one of them. the other one is a girl who betrays our hero, and isn’t really a big, bad villain at all.

while i do like the second story quite a bit, it’s the only one of the three that really works. and in all other areas, this movie is pretty lousy. that means the colors and art that was so prominent in the original, is taken for granted here. there is no attention to mixing black and white with color. instead, we often get no color at all. then at other times, there is a whole character in color. this is so far removed from what the first movie did, often highlighting just one or two objects of a scene, with color, such as a woman’s lips or hand. to make matters worse, the effects aren’t used very well either. there’s nothing in this movie that wasn’t already being done in the original. while there are some appealing qualities (like the second story and how it works as a prequel), most of this movie is pretty bad.