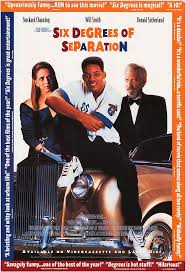 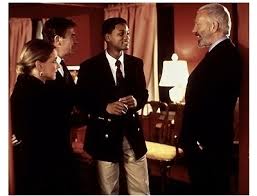 An interesting premise and mystery that works well in the first half, but nearly falls apart the longer it goes on.

Six Degrees Of Separation is pretty much Will Smith’s big screen debut. And he also has the starring role. He plays a kind of straggler who wanders into people’s lives claiming he’s someone and something that he’s not. He dazzles them with stories, amazes them with his skills, and it all turns out to be fake. The stories anyway.

That’s the basic idea of the movie. At the start of the film, smith’s character, Paul shows up at the doorstep of a wealthy manhattanite couple’s apartment building. Donald Sutherland and Stockard Channing play the couple, and they are in the process of entertaining guest Ian McKellan for the evening.

Paul comes in and tells them that he’s a friend with their children back at school. He knows details about them and about their children. And he has a story about how he was in town for recreation and in central park and had just been mugged. He was on the ground and looked up, and where was he, but at the address of his friends’ parents. This is his story.

And of course they welcome him in and he entertains them with wonderful tales, cooks for them, and proves to be a very interesting guest. Especially when he casually mentions that his father is the great actor Sidney Poitier. Once that news comes out, he becomes the king of the playing field. He tells his hosts that he can get them all parts in the film version of the show “cats” that his father is currently working on.

This first scene of smith at the house for the evening is very long and filled with dialogue. It’s easy to see from this scene, how this storyline was originally written and told as a play. And after mckellan leaves and the lights go out and the characters go to bed, the real shocker happens.

Sutherland and Channing wake up to sounds in their apartment and go to check them out. And when they open the room where Paul has been given, they find him having sex with another man. A real low-life character too who walks around the entire apartment naked? Sutherland throws Paul out, despite the character’s desperate attempts at apologizing.

So ends the first act. The next one begins some time later as Sutherland and Channing are at dinner with another couple that tells a similar story about Paul coming to stay with them. Only this time, they say a burglar broke in and Paul caught him, threw the man out, and saved the day. Sutherland explains to them that this other man was no burglar, but was actually Paul’s lover.

And so the two couples go on a mission. Their mission is to find some answers about who this guy “Paul” really is and how he knows so much about them. They go from place to place, including approaching all of their children for ideas. The children turn out to be a bunch of spoiled brats who think their parents should find better things to do. They don’t realize that for the parents, this is being young again. Being curious and having the guts to do something about it.

And while we do get an answer, as to who Paul is and how he knows the details of each and everyone of their lives, the movie keeps on going after that. And perhaps this is the mistake of the film. Once the cat is out of the bag, the movie should be ready to end. It’s like the monster movie. Once the monster is killed, your movie is over. Don’t make the dumb mistake of prolonging it.

The movie goes on to have Paul come back into the characters lives and even develop an unexplainable connection. I get why Paul needs these people, but I’m not sure I believe that they need him as well. It just seems to be a tacked on ending, meant to make us see that the wealthy couple characters have changed and learned something from knowing Paul. I don’t buy it. There’s a lousy ending here and the movie really starts going downhill, heading for it, as soon as the answer is revealed. After that, there is nothing more to offer and so the movie should have come to an end. It starts out pretty intriguing, but certainly gets worse as it goes on.