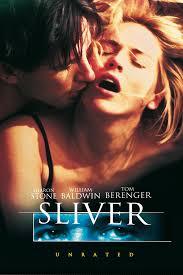 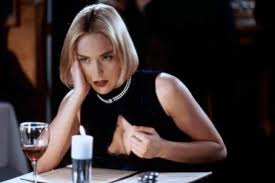 A somewhat creepy thriller, about an apartment building killer, that only becomes interesting in it’s second half.

Sliver is a strange movie. On the one hand, it’s a clichéd film about a simple apartment building killer and a small list of suspects. The fact that this premise is clichéd doesn’t matter because it’s still kind of fun. But then on the other hand, it only becomes a movie about this in the second half, and before that is just about the strange workings that go on in and around the apartment building complex.

The movie begins with the murder of one of the tenants. She is a young blonde woman named Naomi, who enters her apartment after work one evening, goes out onto her balcony and is snuck up on by a hooded man who walks out onto the balcony behind her. Naomi knows this man and is happy to see him up until the moment when he pushes her off the balcony. That’s the end of our little introduction.

Now we meet Carly (Sharon Stone), a woman who looks a lot like Naomi, although not quite as much as everyone keeps telling her. Carly is also young and blonde and attractive, but that’s where the similarities stop. For one thing, Naomi looked like a drug addict and Carly is actually hot. For stone, she was at the height of her sex appeal status when she made this film. In fact, it was her follow up movie to basic instinct, (her breakout film), and came out the very next year.

And like that movie, this one is very sexual and very suspense driven. Both movies were about murders and not knowing whom the killer was. The main difference is that in basic instinct, stone played the prime suspect and a woman with a tendency for evil. She played the most intriguing role. But here, in Sliver, she is the star of the film (the Michael Douglas role from basic instinct), and as such, she is the innocent, normal, and least interesting character.

Outside of the balcony murder that opens up the movie, we don’t get any storyline that touches on murder or crime for close to an hour of the movie. It’s strange, as if that whole murder idea was forgotten about. It wasn’t, of course, and the movie is really just introducing us to other ideas before it brings the whole murder angle back into play. But I can’t help but thinking how much better this movie could have been had it thrown some violent and tense scenes into that first hour to make us aware that there was still a murderer around.

Instead, the first half is really about meeting the characters. There’s an older man who approaches Carly and tells her how much he and Naomi used to be friends. That man, Gus, ends up dead in his bathtub, dying from old age. His situation is very strange. The movie shows us his dead body in the steaming tub, through cameras and television sets that are broadcasting images from all around the building. We don’t know whom the cameras and TV’s belong to at the time, but the movie certainly makes it look as if Gus has been murdered.

Some of the other characters we meet include two guys who both are interested in Carly, and then a neighbor named Vida, who has a definite drug problem. The two guys are Zeke and Jack. Zeke is played by William Baldwin and is the romantic lead to Sharon stone’s character hears. He’s the guy who actually gets to sleep with her. The other guy, Jack, is played by tom Berenger, and is an absolute creep. Jack is the kind of guy who hides in a room at the end of Carly’s party and waits for everyone else to leave before letting her know that he’s still there. He’s the kind of guy who wears a hood in central park while jogging around and then jumps out at Carly when he sees her running by, scaring the absolute hell out of her.

Jack and Zeke are enemies, although we never really get into the pasts and what kinds of back-stories they might have had with each other. What we do know is that they tell stories to Carly about each other. Specifically it’s Jack talking bad about Zeke, letting Carly know that this guy she is sleeping with has issues. Jack wants Carly to believe that it is Zeke who killed Naomi, and has a lot of stories that might make her believe him.

The second half of the movie is where the murders start up again. The killer strikes out and puts Carly right at the center of it. At the Same time, we find out who all of those mysteries TVs belong to and how the person got them. There are a couple of climaxes to the movie, as the two men finally confront each other and we start to get answers about everything that the movie has been withholding from us.

Sliver works on some levels, but then also fails on a bunch of others. It tries to go for the same themes as basic instinct did, and it doesn’t quite come off as successful. The sex and murder are there, but the mystery angle isn’t nearly as apparent. Sliver spends too much time introducing characters and establishing affairs, and not enough time getting into the violence acts of the storyline. The second half is definitely better than the first, but to its credit, the first half never loses our interest. The first half is basically all about the sex, and the second half is all about the violence. If the movie just found a way to mix them together better, it would have been a much more interesting film.