Snow White And The Huntsman *** 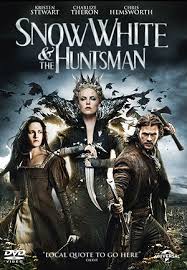 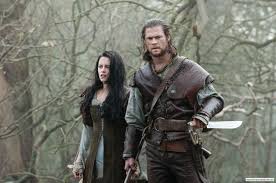 All style, but not enough substance, this movie looks great, but it moves a little too slowly at times and could have been a lot better.

Snow White And The Huntsmen might get off to a slow start, but it ends up having a lot going for it, as the movie goes on. The evil queen screams, yells, and does all the usual things that you would expect. But her magic and wardrobe and all the cool little style things about her character make it worthwhile. The same can be said for the overall tone of the film, which is incredibly dark and violent, the way the Grimm brothers would have wanted it. The story also finds new ways to tell this tale, such as giving the Huntsmen a major role and giving the queen an army made of glass. The seven dwarves are a lot of fun, as played by many well-known British actors. The movie has lots of ambition and tries to create a whole world in the enchanted forest, even if it ends up copying ideas from other films here, (most notably Princess Mononoke.) the plot might sometimes lag, but there is enough creativity here to appreciate the film.

Snow White and the Huntsmen is a gothic take on the fairy tale. That’s just fine when you consider that it was originally written to be a dark story about a queen who tries to have an innocent girl killed just because a mirror predicts that the girl will one day be the queen’s undoing. Of course Disney put it’s own spin on the movie and made it more light-hearted, with singing dwarfs and everything, and that’s the version that most of us know. But this movie offers up something different. It offers us a take on the story that is more about intensity then about simple life lessons. There’s a lot going on in this movie, which is why the clichés that come by the ending are so hard to bare.

The story begins with the legend of the queen who pricked her finger and watched three drops of blood fall on the snow. She fell in love with how white the snow was and named her child snow white. She died, and then her husband, the king, went to war. Now this is where the story of this movie gets original. The king’s knights go to battle against an army of men made of some kind of break away material, like glass. When the army is defeated, the king’s men find a woman chained up and held prisoner by the evil army. They free the woman and the king falls in love with her and makes her his queen.

Charlize Theron plays the woman, and no sooner does she take the throne, does she prove to be evil at heart. On her very first night with the king, while he is sleeping with her, she murders him. There’s poison in his drink and it takes a hold of him, but that’s not enough. The evil queen makes a speech about how men use women and then she sticks a knife through his heart. I wondered, when I saw this, why that was so necessary, if he was already poisoned. Wouldn’t the knife prove that the queen killed him? Then I realized that it didn’t matter to her. She wanted to dig the knife through him herself, and no sooner does she do that, then her real army arrives at the gates to protect her. She has nothing to fear from the men of the kingdom.

I liked the narrator telling us that the queen’s new army was very much real. It was the movie’s way of telling us that the first army, which the king defeated, was really the queen’s army. Her being held captive was all part of a trick to get the king to welcome her in, and take her as his bride. In these ways, the first half of the movie is great. The queen is by far the best character in the movie, and in the first half, she is featured quite a bit.

Of course she calls upon her mirror, “mirror, mirror, on the wall.” and a liquid pours out of the mirror and onto the floor before forming a sort of human figure with a cloak over it’s head. This looks like the liquid metal bad guy of Terminator 2, and it’s cool. The queen has snow white imprisoned in the dungeon, and we learn of her secret way of staying young. She sucks the soul out of a young person, turning them old, and then uses this youth to keep herself looking in tiptop shape.

When the mirror, one day, tells her that snow white is the fairest of them all, the queen hires tells her brother to kill bring her in to be killed. Only the brother botches the job and snow white escapes. She runs off into the forest, and so the queen summons a Huntsman (Chris Hemsworth), who knows the forest, to go after her. The queen promises the Huntsman that she can bring his dead wife back to life and will do this for him once he brings her snow white. Only once he finds snow white, she convinces him that the queen is lying and he finds out from the queen’s brother that what snow white says is the truth. Why the brother would let the Huntsman know that the queen was a liar, I have no idea. Especially if the Huntsman clearly believed it, which was the reason why he came to the forest to begin with.

Now the movie focuses on snow white traveling along with the Huntsman, and it starts to get a little slow. Sure there are beasts and creatures of nature, as well as different people that they come across, but the threat of the movie is the queen. When she’s not around, the movie feels a whole lot safer. Snow white and the Huntsman encounter a giant troll monster. The creature is cool to look at, but the way he is defeated is dumb. Then they come to a village of all women and stay there until the village is sacked and burned by the queen’s men.

Eventually they come to the eight dwarves. There are eight, but after one of them meets his end, there are only seven left. Some fine actors play these guys, with their bodies digitally shrunk down to dwarf size. We get Ian McShane, Nick Frost, Ray Winstone, Tobey Jones, and Bob Hoskins. There are some others too, but those guys are the most recognizable. They look and sound great, although their dialogue isn’t nearly as funny as it should have been.

The dwarves are fun, as is the nature that they come across including all kinds of creatures of the woods. This reminded me of Princess Mononoke, with the strange looking nature spirits all around them. Especially with the giant elk and it’s branch-like horns. The plot moves along to give us a cool take on the completely poisonous apple storyline, but after that, it runs out of ideas. It’s as if the movie wants to rush to the ending from this point on, and so we get many silly scenes that don’t seem to be thought out at all. The worst has got to me snow white’s speech to the army about bravery in battle. It’s Kristen Stewart, of twilight, playing snow white, and delivering this speech and coming out of her mouth, it all just sounds silly.

The fights at the end aren’t as much fun as they should be and the queen’s fate is rushed, when the movie should have found a way to handle it creatively. Most of this movie is cool. Really the entire first half is well done. The queen is fantastic. A wonderful, menacing villain. This is partially because Charlize Theron delivers such a lively performance, and because the visual images that are strongest in this film are the ones that deal with the queen (a bath of milk, for example, that sticks to her like white paint). Unfortunately, the movie doesn’t know where its strengths are, and the queen nearly goes away for large stretches of time in the second half. What a big mistake. The movie has a lot of neat ideas and visuals, and such a cool dark take on the plot. With all that going for it, it’s a real shame that it couldn’t avoid the clichés that it fell into by its end. It’s a good movie, but it should have been great.