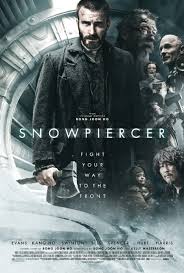 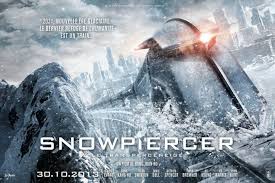 There’s a great concept on the table here, but the movie itself that comes from it is very bleak and only moderately interesting.

The premise is cool. It’s the future and the whole world has frozen over during an ice age except for the passengers on board a train. this train, known as the snowpiercer, is like noah’s arc, and houses whatever is left of humanity. There are two classes of people. The poor are in the back of the train (the last cars), and the wealthy are up at the front. The movie is about a revolt by the poor passengers. it is played like a take on fahrenheit 451, where the wealthy are evil and corrupt. The setting is cool, but the story is routine. With weak characters and only somewhat interesting action, this movie should have been a whole lot better. Equilibrium is an example of a much more enjoyable version of the bleak future, rebellion against the upper class, story.

Snowpiercer was supposed to be something amazing. The word of mouth on this thing was somehow out of control, making it a bit of a sensation. The actual film is only somewhat interesting. Sure, the concept is cool, but that will only get you so far. Story is everything, and just because you take a familiar story and wrap it in some fancy packaging, doesn’t really change the fact that it’s still a familiar story.

The fancy packaging, of course, is the setting. This movie takes place in a bleak future where all of humanity has been wiped off the planet due to a drastic ice age, except for the lucky ones who are riding a train. The train was made to continuously travel around the world, making one full loop each year, and it is so cold outside that those on board are convinced if they even thought about getting off, they’d be dead in minutes.

the setting is especially cool because this train has been designed so that there are many different creative rooms. there’s a greenhouse room and an aquarium room and a night club room and a school house room. the only problem is, we don’t see any of these rooms until nearly halfway through the film. that means the first half takes place in the depressing darkness of the lower class room, and by the time we see the creative parts, we’ve already kind of made up our minds about the movie.

that first half is just too dark. we start by seeing guards come in and take a count of the passengers, ordering to sit down, one row at a time. then we see the guards ask if anyone can play violin. when one man and his wife speak up, saying they can both play, the guards order the two of them to separate, since they only need one. when this is a problem, the guards end up beating the wife. all this is designed to show us that the guards are our villains and are the ones running the show. at least here, in the poor camp.

like most movies about the corrupt rich upper class and the poor group who revolts, this one basically presents two camps to us. the poor area is like a prison, and we meet curtis (chris evans) along with his friend, edgar (jamie bell). these guys are planning something. especially curtis, who seems to be the leader. he scowls at the guards and makes comments to his friends. the guards kidnap one of the kids and when the boy’s father retaliates, he gets a severe punishment, which demonstrates just how cold it really is outside.

when the time is right, curtis leads the revolt. it starts with them running long, connected tubes, like a battering ram, as far as it can go. curtis and some others run on top of the tubes as they are being shoved forward. this gets them into the prison room where Curtis finds a Korean man being held prisoner and sets him free. This man is Korean, and is a known escape artist. They say he is the man who built the doors system of the train and knows how to get each of them opened. He agrees to help them, but under two conditions. The first is that they free his daughter as well. The second is that for every door he opens, they give him a little more of the drugs he craves.

There are a couple of scenes of action and attacks between the guards and the rebels, but none of it is that great. I expected better action. Here, it’s just a bunch of guys running at each other and hacking away at each other. The choreography is nothing special, and that’s a real shame. There are moments before the action scenes that are memorable, such as when the guards use their night vision goggles, knowing the train is about to go black as it heads into a tunnel, but the action itself is never anything great.

Aside from the storyline of this group of rebels trying to make it to the front of the train (where the upper class citizens, as well the engine are), the movie also takes the time to introduce to a bunch of different characters. There’s Octavia Spencer (from the help), as a mother trying to find out what happened to her child after the guards came and took him. Then there’s john hurt as an aging Wiseman who seems to be the moral compass of the film. These characters might be played by great actors, but including them seems more like filler than anything else.

As we move through the second half of the film, we start to see some of those cool rooms, but it’s too little too late. Sure, the rooms look neat, but they don’t exactly add anything to the story. There’s an occasional action sequence thrown in here and there, and helps keep the momentum, only none of it is that great. Both the story and the action are average, and the characters are pretty weak.

There are some twists and surprises that come out at the end of the film, but they assume that we are really invested in the story at this point, and are following everything. Unfortunately, that is not the case. The quest of the movie seems to be to find the man running the train, a wealthy owner named Wilfred. Finding him should provide answers, and it does, but the movie thinks it’s smarter than it actually is, and assumes these ideas will mean something to us. Snow Piercer has a cool premise, but it is poorly handled, and not a very good film.