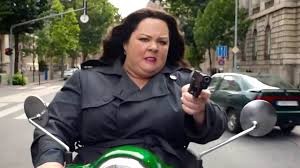 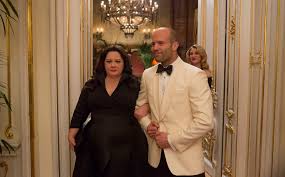 A very funny take on the spy movie genre with Melissa McCarthy representing the normal character surrounded by a world of crazy and extreme individuals that she has to navigate around.

Spy is a funny movie. It’s the third film by director Paul Feig (Bridesmaids, The Heat), and with each of his movies Feig is trying a new genre of comedy. The one consistency is that he continuously uses actress Melissa McCarthy. The two of them working together are three for three. With this movie, they spoof other films of the genre, such as Bond movies, but do it in a way where it is more it’s own story (unlike say, Austin Powers.) Feig’s movies come from the Judd Apatow camp, which means lots of cursing and gross situations in order to get the laughs. It works. This movie is a hard R and doesn’t hold back. The story, involving enough twists and turns to spin Wild Things on it’s head, is pretty good a well.

Spy is the latest comedy by the Melissa McCarthy – Paul Feig unstoppable team. Feig is the director who made Bridesmaids, The Heat, and now this film. Next up he is directing the Ghostbusters reboot starring McCarthy and Kristin Wiig. Clearly Feig likes to work with McCarthy to the point where she is pretty much his muse (meaning he does not make films unless she’s in them.) It’s a smart move. The two of them really are the perfect fit of both wit and timing. Just look at the movies McCarthy has made without Feig, from Identify Thief to Tammy. And there’s also the incredible record of three for three when these two are working together. Bridesmaids was the movie that established both of them. The Heat was the film that proved the first time around was more than just luck. Now Spy is the movie that really shows they can do something vastly different, taking their routine to a whole different genre and comedic world.

This would be the world of international espionage and top secret government agencies. We’re talking James Bond, Mission Impossible, and the Bourne movies kind of stuff. And McCarthy, an actress who is clearly not in tip top physical shape, is the star. That’s part of the humor, of course. So is the fact that for the first time in the three movies that she and Feig have made together, McCarthy is playing the normal character on screen. Usually she’s playing a sort of riff on her Bridesmaids persona (which is to a certain extent what Chris Farrelley used to do), including all kinds of falling and plowing through things. She’s always been the crazy or extreme one, and here, in this movie, it’s everyone around her that’s crazy.

The movie opens with Bradley Fine (Jude Law), crashing a party and sneaking into hallways, rooms, and basements that are supposed to be off limits to guests. Fine has Susan Cooper, (McCarthy) a CIA agent back home, talking to him through a hidden ear-piece. She’s sitting at the headquarters looking at a computer monitor which shows her where the enemies are that are getting close to Fine. Cooper then tells Fine how many men are coming and from which direction.
Aside from the action and excitement here, there is also the comedy of their relationship which is clearly one where Cooper is in love with Fine and fantasizes about him. The things she says which reveal this, such as “I would accept that kiss with an opened mouth,” are funny. The only problem is that this whole sequence really has one ongoing joke, which is about their relationship. She loves him and he is oblivious to that fact. After a while it gets a little tiring. Fine is killed, Cooper is put into action (instead of sitting at a desk, out of harms way), and suddenly the movie goes from decent to pretty damn good.

This is due in large part to Jason Statham who is right on the money here. With Fine’s death, at the hands of Rayna Boyanov (Rose Byrne), it is revealed that all agents currently in the field have been compromised. The enemy knows the identity of each of these agents and so the CIA appears to have no moves left. That’s when Cooper steps up and offers to go undercover, and out into the field. It is Rick Ford’s (Statham) who objects to this the most strongly. He is one of those agents that has been compromised, and the idea of sending Cooper out there infuriates him. Statham curses and throws around vulgar slang like there’s no tomorrow. Just about every bit of dialogue he delivers is very funny and is executed perfectly.
After watching a video of Cooper in action, on some training grounds known as The Farm, Janney (the CIA boss) agrees to send her in. The identities that Cooper is given are ridiculous. So are the little gadgets that the high-tech weaponry department provide her with. The scene where she gets these gadgets is clearly a spoof on Bond movies, only here the movie has fun with giving her devices that only look like things an older, and very unhealthy woman might actually carry. Nearly every one of the devices is made to look like Cooper has some kind of terrible condition. This is another one joke scene, but it works, and the devices keep getting funnier and funnier.

When she arrives in Europe, Cooper is taken to the worst motel in the sleaziest neighborhood. At first she stares out the window of the car passing all the nice hotels and thinking that one might be for her. Then the driver drops her off outside of the hotel where she will be staying, and the place is disgusting. Rats climb on the outside sign and the hallways are filled with screams. When Cooper does make it into her room, she gets a surprise visit from Rick Ford, who is sitting in a chair in the dark, waiting for her. Ford goes over with her a long list of the experiences that he has been through and survived. Every one of them sounds incredibly insane and ridiculous. One is funnier than the next. The result is a truly hilarious scene.

The real action starts shortly after this. First there is a guy who attacks Cooper on the balcony outside of her hotel room. They end up fighting there, and when he goes flying off the balcony, dying from the fall, it causes Cooper to vomit. Her vomit is shown in slow motion (not as gross as it sounds, it really just looks like orange soda), but it lands all over the dead guy’s body. Then she drops the knife and that falls down and stabs him. This is funny stuff. It reminds me of the end of The Heat, where McCarthy has to keep stabbing Sandra Bullock in the leg so that the bad guys don’t find out she has taken the knife. Feig likes this kind of humor. There’s another moment in this film where a knife goes through a person’s hand in slow motion, and it is also played for comedy.

The storyline of Cooper playing it safe with disguised takes a change when she decides to throw away all of the cover identities the CIA has given her to figure it out for herself. She gets dressed up in something nice, and then heads to the casino where all the villainous big players will be. There’s a great moment where Cooper tries to sit down at the same poker table as big boss Bobby Canavale, but is turned away. Instead, she goes over to the bar and sees the drink that is going to be served to Reyna being poisoned. What happens next changes the playing field and relationship between Cooper and Reyna for the rest of the movie.

The action in this movie is used mostly to get laughs. Feig is a master of using slow motion to make something look funny. And then there are the hilarious characters that Cooper is surrounded with. Statham is amazing, but aside from him there’s a Roman agent who is always hitting on Cooper and a best friend of hers who is still at the CIA and constantly talking about her terrible sex life. There are some scenes that could have been better (when bats fly out of a ceiling, we want more jokes like this, such as smoke alarms triggering the water sensors), or when McCarthy lands a motorcycle in some drying cement, we want the scene to last longer. Still most of the comedic timing is just right, giving the Feig and McCarthy team another solid and very funny film!