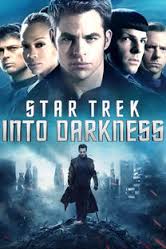 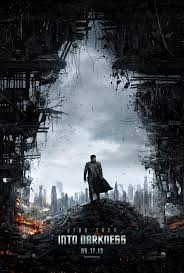 Not quite as good as the first one, this movie is smart and interesting, but the action and humor don’t quite cut it.

Star Trek: Into Darkness is the sequel to the first movie, and it doesn’t have the same passion or cleverness. Maybe that’s just because it’s the second go around and we are already used to the characters, or maybe it’s because this movie attempts to be much darker and therefore less playful. either way, the first half has a number of similarities to the first movie and the second half, which tries to be it’s own thing, ends up getting too convoluted. Now, I did like the movie, despite the way most of this sounds, but it just didn’t hold up to the first film. on it’s own, the movie is fine, but just not anything special.

Star Trek: Into Darkness is a fine movie. It doesn’t excite you and make you say, “wow,” the way that the first movie did, but it still has a lot going for it. The storyline, while overly complicated and full of twists and turns, works pretty well for a while, until it just gets tiresome. When it doesn’t take too much effort to follow, and doesn’t keep changing back and forth, we can enjoy it. That’s when we can marvel at the visuals, technique, humor, and ideas. But the longer the movie goes on, the more it loses its way. There are times in the first half, when the movie feels like it is copying the formula of the first film, the way that sequels tend to do. All of this is okay, since nothing major is copied, and the focus is on having fun more than anything else. It’s once the movie starts to go in a completely different direction, changing everything including its tone that things start to get out of hand.

The very start of the movie is the first part that feels familiar. The original film opened with multiple action sequences. There was the destruction on board the ship, with Thor’s Chris Hemsworth saving the day, and then a scene down on earth, of a young Kirk being chased off the side of a cliff in a car. The car went over the cliff and so did the camera to show us the car falling. The second movie, into darkness, opens with some similar ideas. First off, there is chaos going on within the ship. That’s because Kirk (Chris pine) and bones (Karl urban) are running around a cool looking red planet, being chased by some bright-white skinned aliens, and the crew members are trying to rescue them. When Kirk and bones run right off the side of a cliff and jump down, into the water, and the camera follows them, it is exactly like that young Kirk scene that was part of the opening to the first film.

Still, it’s nice to have the movie open with an action scene, especially since the scene seems to have been going on before the movie even began. In this way, we are thrust right into the action, thrown headfirst into the middle of it, and it helps that the planet looks cool and the creatures chasing them look even cooler. While all this is going on, spock (Zachary quinto) is trapped in the middle of a volcano. Fire and lava and explosions surround him, and as if the Kirk chase and the madness on board the ship weren’t enough excitement, this scene gives us even more.

The event has Kirk rescue Spock, but break certain protocol in order to do so. This leads to a moral debate between our two leads as Kirk has saved spock’s life, and spock now betrays him by reporting the incident to Starfleet (the commanding institution or government of this world.) the debate about how there is a time when lying is the best option, is interesting, and Kirk gets demoted to a lower job. He winds up at a bar (possibly the same bar where he had a fight in the first movie), sitting next to pike (Bruce greenwood), and discussing that fight and how pike found him in the first film. I love when sequels reference the first movie, reminding us that their storylines are connected.

The plan is that Kirk will no longer be his own captain of his own ship, and instead will now be the second in command to pike’s ship. He will be doing for pike what Spock was doing for him. Only there is a terrorist attack in London that suddenly happens, and throws everything off. Benedict cumberbatch plays john Harrison, the man who orchestrated the bombing of a Starfleet archive facility. The high ranking officials of Starfleet now gather in a war room to discuss the events (why are spock and Kirk here?), and it is Kirk who brings up the point that it was only an archive facility that was bombed, and that this terrorist must have an alternative plan.

Kirk is right, and the terrorist now attacks them again, but when it is later revealed that the archive facility was really a top secret weapons facility, Kirk’s prediction doesn’t really make sense anymore, and the fact that Harrison did attack again, turns out to be more of a coincidence. The scene where Harrison sits in a helicopter-like vehicle, firing away at the windows of the war room, is pretty cool. By the end of it, Kirk is given a new mission to go and get this terrorist on the clingon planet where he has run to and is now hiding out on.

So far the movie has been pretty good. From here, unfortunately, it starts to get a little bumpy and drag on more than it should. When a couple of crew members leave the ship to go get Harrison from this new planet, it reminded me of the scene in the first film where a couple of crew members had to leave the ship to go down to a machine that was blocking their path and turn it off. Both scenes end up with fights from attacking creatures. By the end of this one, Harrison has willingly surrendered and the movie is ready to finally go on it’s own path.

The problem is, that path is not great. There is a lot of ambiguity and switching back and forth about whether Harrison is really good or bad. For a while the movie straddles the idea, putting his character in a gray area of being somewhere in between. Meanwhile, we get a new surprise enemy and a pretty cool discovery about the weapons on board Kirk’s ship. Peter Weller of Robocop shows up as the head of Starfleet, Marcus, and gets a lot more screen time than one might expect. He suddenly becomes a major character in this story.

Another new addition is carol (played by alike eve) as a new crewmember that seems to pop up out of nowhere and has an interesting connection to the program. Other than these actors, however, most of the cast is the same. It’s nice that there aren’t too many new characters, the way that sequels tend to do, and that for the most part this does feel like a follow up to the first movie. Despite all of the cast members being back and pretty much having the same attitudes, there is still something missing. The first movie just had more richness to its humor. Chris pine was much more of a cool, jams dean-like, and wiseass. One of my favorite lines from that film was when he bypassed one of Spock’s programs, and an angry Spock wanted to know how. Kirk’s reply…”I’m not telling.” there is nothing like that in this movie at all. Instead, the tone is much more serious. There is some humor, sure, but it’s not the same kind as the first movie offered us.

Maybe that’s this movie’s attempt at being darker. Between the title of the film, and also the way that second movies tend to go darker, going all the way back to the empire strikes back, that is certainly the intention of this film. And it works, but probably not in the way the movie would have wanted. Characters like Uhura (Zoe sultana) and Chekov (Anton Yelchin) are given almost nothing to do. Even the action doesn’t seem like anything all that great. At a certain point, effects become too computerized and it takes the audience out of caring. This movie crosses that line. Now there’s plenty to like about the film, including a very cool cameo by Leonard enjoy that again (just like in the first movie), uses the alternative timeline story in a clever way, but still the excitement and intensity just aren’t there like they were with the first go around. This movie is good, but it is far from great.

cial. the bad guy, played by Benedict Cumberbatch, is pretty cool, and so are some of the surprises including what this villain is really about. The action is just okay. it’s probably more exciting, and certainly more interesting, in the beginning than at any other point of the film. The storyline is okay and so is the action, but something definitely feels missing. Maybe it’s just that the first movie was so good. It’s not easy to catch lightning in a bottle twice.