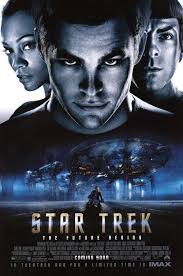 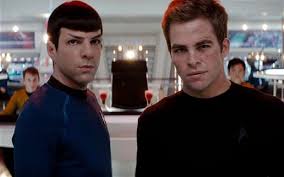 A  fantastic action movie, loaded with witty characters and a smart, creative plot.

Star trek is a JJ Abrahms movie and it’s probably the most fanboy friendly comic book like fun movie he’s yet to make. Abrahms, the writer / producer of the television show Lost, had only made one movie before this, Mission Impossible 3, which I consider to be far and away the best film of that series. Between Lost and MI3, he was on a role, and star trek showed just how good he really was.

the movie is an origin story, starting at the very beginning, and developing the characters of Kirk and Spock. Its their story, and it begins before either one of them was even born. The movie opens on Kirk’s father (Thor’s Chris Hemsworth), inheriting the captain position and trying to save everyone on the enterprise. he saves most, including his pregnant wife, but dies in the process. it’s a hell of a beginning, thrusting us right into the excitement.

most movies open with an exciting scene, but then settle down right after that. not this one. it’s next scene, of a young kirk, stealing a convertible and flooring it through the desert is just as thrilling. he rides the car right off the side of a cliff, narrowly jumping out before it goes over. and from there we go to a child spock, dealing with bullies who make fun of his human mother. the spock scene might be the slow down scene, but it doesn’t really feel like it. abrahms is smart enough to keep his camera moving and his dialogue snappy. the story develops only a little at a time.

now we’re done seeing kirk and spock as kids, and so we move to seeing them in action as adults. kirk gets into a fist fight at a bar, but not before he delivers some witty one-liners, shows us that he’s pretty smart (when he answers a question by a girl he’s trying to pick up, named ahora), and also that he’s a good fighter. the bar fight scene is abrahms keeping the momentum pumping and the action alive. from there we go to spock dealing with insults about his mother now coming from higher up authority figures who consider it a handicap, having had a human for a mother. spock doesn’t see it that way and wants nothing to do with the board. he signs up for starfleet instead.

starfleet is the training program that gets pilots and captains and ship navigators ready to go into space. kirk trains alongside bones, the doctor, and ahora (zoe saldana) the hot girl he was trying to pick up at the bar. he even has a scene where he’s about to sleep with her green roommate when ahora comes in and stops it. but not before she can take off her shirt. kirk’s experience at starfleet is a lot like a college experience, complete with dorm room interludes and test cheating scenarios.

when kirk takes a test that was designed by spock, he finds a way to outsmart the test and beat the system. he’s very relaxed and casual about it too, sitting in a chair, eating an apple while everyone around him is panicking. this guy is the epitome of cool, and when his trick work.s, it drives spock crazy. spock ends up accusing kirk of cheating in front of a panel of judges, setting them up as enemies right away, but the hearing is interrupted by an attack from nero, the movie’s alien villain, played by eric bana.

and now we are launched into the real story of the movie. it took a while to get there, and it was all great fun seeing the characters develop, but now there’s a common enemy and our forces must unite. that means all of our heroes getting on the starship enterprise ship. bruce greenwood, the man who first recruited kirk after the bar fight, is the captain, and spock is his second and command. ahora is there too, as is bones (karl urban from the lotr movies.) in fact, bones helps sneak kirk on board just because they are best friends. and we also meet some new characters on board, including zulu (harold and kumar’s jay chou), and some russian guy (anton yelchin.) these are all pretty well known faces and stars. later on, they’re even joined by simon pegg as scotty.

as for the plot, nero ends up getting captain greenwood and holding him hostage and it’s up to the remaining crew to not only rescue him, but to stop nero. the path to do that gets pretty sticky when kirk crosses spock again and ends up being removed by security and shot out of the ship to another world. that’s where we get introduced to the idea of a parallel timeline (a very lost-like idea), and a way that the old star trek movies could coexist at the same time as this new star trek movie. it’s pretty genius.

star trek is pretty brilliant because even though it is heavy on plot and creativity and offering the audience a storyline that is pretty complex and challenging to figure out, it is also heavy on the action. there’s the great scene, for example, where three shy divers have to shoot out of the enterprise and down onto a laser satellite in the air and destroy the satellite before the satellite destroys a planet. this turns into a big fight when the enemies who are operating the laser show up to stop them. when kirk finds himself on the wintery planet (reminiscent of the place luke skywalker finds himself at the start of the empire strikes back), he is attacked by not one, but two giant beasts. this stuff is pretty cool, and abrahms is sparing no expense.

star trek is a wonderful movie. i’ve never been a fan of the tv series or any of the other movies, but this thing is fantastic as a stand alone action film. it’s got a very smart plot, some great humor, and some really enjoyable characters. kirk, in particular, is absolutely super cool here, like james dean, riding around on his motorcycle, scoping out the enterprise as it is being built. jj abrahms is an amazing filmmaker, not only because of this movie, but because of his others as well (three films as of now, mission impossible 3 and super 8 too.) star trek is his best movie of the three because of just how much it does. it not only has the cool action, but goes way back into the history of these characters to give us one of the most interesting origin stories ever put on screen. and how smart to tell us both kirk’s and spock’s beginnings at the same time, using the two different plotlines to balance each other out. this is truly an excellent film, with edge of your seat intensity!