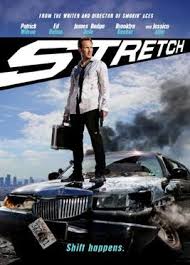 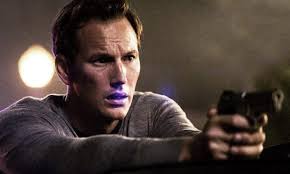 Another Joe Carnahan movie that is more style than substance, this one is enjoyable at times, but mostly not too compelling.

This is an okay action movie. It is probably closest to Smoking Aces when it comes to Joe Carnahan movies. He’s a director who takes modest budgeted films and spins them into masterpieces (Narc and The Grey), but with big budgets, he falls apart. Stretch is an example of that. The movie definitely has some appealing qualities including a sense of humor, some nice use of voice over, and a cool profession for our main character to be in. But then there’s the routine story about a guy who owes money to bookies and has to get it all in just one night. There are no memorable characters here and the action and twist and turns of the story feel pretty forced. This movie might look great, but it’s just not very interesting.

Stretch is a Joe Carnahan movie that was made straight for VOD (Video on Demand.) It’s a little odd, that the movie was never released in theaters considering both the director and the stars involved. Those stars include Patrick Wilson, Chris Pine, Jessica Alba, and Ed Helms. I suppose the situation was that this was greenlit as merely a passion project and a movie made for fun, as opposed to a film that was put out with the intention of really generaring money. And it’s not as if this is such a shame, that the movie didn’t get a wider release, because it is hardly a great film. It’s a pretty average movie, that is very hit and miss, much like many of the other films directed by this filmmaker.

Carnahan is an unusual guy. He’s an action-oriented director, and really he’s a man’s man kind of dark and gritty filmmaker. That’s when he’s at his best, anyway. Carnahan has made two great movies and three mediocre ones (including Stretch), to date. I’m not counting something like his first movie, Blood, Guts, Bullets, Octane, on the list, because that film was so independent that it was before Carnahan had the resources to really show off his talent. Instead, his breakthrough movie was Narc, a modern take on the classic Japanese film Rashomon, as told from the perspective of two police detectives, and that was a great movie which got the ball rolling for him as a director. His other terrific film was The Grey, a  survival story of man against beast, starring Liam Neeson.

If Carnahan had only made those two films, this would be a very different discussion. Instead, he also made a bunch of movies that feel more poppy and colorful, with poor attempts at humor, than they do smart, stylized, or well-put together. These movies are Smoking Aces, The A Team, and now Stretch. It’s no coincidence that Carnahan’s movies which were made on the smaller budgets, and designed to look the most modest, happen to be his best. It’s also no coincidence that those are his two grittiest films. Narc and The Grey have a lot in common, and definitely show the mark of a man who has talent when given limited resources and really put to the test.

It is unfortunate that Stretch takes after Carnahan’s lesser films, which are all about chaos. The movie is about a limo driver, named Stretch (Patrick Wilson), who is broke and in a bit of a fix. There are bookies who he owes money to, (we’ve seen that story a hundred times before,) and they have just sold off Stretch’s debt to a different bookie who wants to collect. Tonight. Stretch has been paying the debt off slowly, consistently handing over the same amount of money each month. Only now, he needs to get whatever he still owes, and pay it all at once.

It’s a decent premise, but certainly nothing special. The coolest thing about it is that our main character is a limo driver. We haven’t exactly seen many movies about this profession. In fact, much of the first half that really works is about the life and what it’s like to be in this business. There’s the guy who was the legend of the industry, Karl with a K, (Ed Helms), and the story of how he did things, (such as cleaning up body parts for the Walking Dead’s Norman Reedus,) up until Karl with a K kills himself. Then there’s the competition, a guy named The Jovi, who drives around in a white car and a white outfit and never reveals his face. There are also a number of clients who Stretch picks up, showing us what it’s like in his line of work. He picks up David Hasselhoff and also Ray Liotta. Each of these scenes is a lot of fun, (although it would have been nice if there was a reference to Goodfellas, somewhere in the Liotta bit.) The movie features a lot of voice-over, and there’s none of it is nearly as fun or funny as it should be.

And then we get to the central plot of this movie. Stretch has to get that money he owes, fast. He’s got one night to do it. The ride dispatcher for the limo company, played by Jessica Alba, is sitting there at the garage, wanting to help him. Whenever a ride comes in that seems like it will pay decent money, she sends it Steetch’s way. Only his boss wants him back, and never authorized him taking the car out for this long. As long as Stretch is out there, on the road, he is going rogue, not following the orders of his boss. It gets to the point where the boss even has On-Star dispatcher disable the vehicle, only for Stretch to find a really clever way of getting it started back up again.

Long before the boss takes this kind of action, Alba’s character, Charlie, puts an important call into Stretch about a ride. There’s a guy known as Roger Karos (Chris Pine,) who is known to be crazy and into some pretty heavy things. Between drugs, women, and an overall lack of sanity, this guy is a handful. But there’s a reason why Stretch might be interested in him. He pays a lot. This guy tips heavy everywhere he goes. If Stretch can get him and make him happy for the time they are together, it should turn into a major pay day at the end of the ride. That’s the setup. So the mission begins.

Stretch drives to the coordinates given to him to find this guy. Karos wouldn’t give an exact location, and instead only provided grid coordinates, but when Stretch shows up, the man is nowhere in sight. That’s when he suddenly parachutes down, landing on the roof of the limo, wearing nothing but a cod-piece. He slides down the windshield and Stretch jumps out to get him. This character Karos is a madmen. At one point he sets fire to the back of the limo and at another he spray paints the whole thing. But Stretch doesn’t care. All he cares about is getting the amount of money he owes the bookie. Six thousand dollars.

Stretch makes it clear to Karos that he needs that much money by the end of the ride, and Karos agrees. But only under certain conditions. The conditions are that Stretch needs to do a few favors for him. The first is to pick up some wild and crazy girls all dressed up in masks. The second is to drive them all to a party. Now this is not just any party. It’s the kind of place that is a thing of legend. Think of it like the place from Eyes Wide Shut, (everyone dressed up in masks and then some), times a thousand. There is even a security guard outside the gate wearing a crazy electronic mask and demanding money to enter.

The final and biggest assignment that Stretch is given is to go retrieve a briefcase for Karos. Now, in order to do that, he has to leave the party right after dropping his client off. We never even go inside to get a taste of it. That’s a real shame considering how much they built this party up and got our expectations raised. I guess it’s the idea that whatever we imagine is wilder than anything they can actually show us. Instead of enterring the party, we follow Stretch on his mission, which turns out to be just okay. It involves a whole bunch of groups, some of which are gangsters, some FBI agents, and more. It becomes a bit of a mess, and reminds me of all of those Tony Scott movie endings (True Romance, Enemy of the State, Domino), where there is just too much going on all at once. The movie has some fun parts to it, but overall it feels very chaotic, and also not very creative or original. There’s nothing really special about this film, including no memorable characters. And I could have done without Ed Helms’ frequent appearances as a ghost as well.