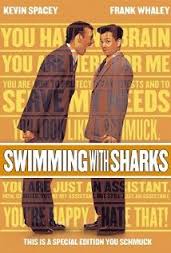 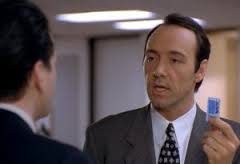 An average movie where nothing all that exciting or unexpected happens until the very final moments.

Swimming With Sharks is an independent film with Kevin Spacey playing an absolute jerk off a boss. It’s basically a precursor to Horrible Bosses, which came out about fifteen years later. And the angle here is that Spacey’s character, Buddy Ackerman has a new assistant who he treats terribly, and that assistant, Guy, (played by Frank Whaley), ends up breaking into Ackerman’s house and torturing his boss.

None of this is a surprise since we see it all at the very beginning of the film. We see Guy holding Ackerman prisoner, tying him to a chair, and staying around to punish his boss. And then we flashback to the events that led up to this, starting with guy’s first being hired. The movie will constantly check back with the scene of Ackerman tied up in the chair, but it is mostly about how things got to this point. The scene of him in the chair is mostly short and quick.

Something about this premise doesn’t feel especially fresh. Maybe it’s just that we are being given so much of the story from the very beginning. Or maybe it’s that the movie doesn’t quite handle the flash backs as well as they should have. The primary story should have been the two men in the room with Ackerman tied up and them discussing all of the different things that happened. And then for each one they discuss, we should have been given a flashback to watch it.

Instead, this movie has its primary story be the story of how Buddy got to this point. We only check in with the being held hostage scene very sporadically, and when we do, it has no connection to exactly what’s going on in the flashbacks. That’s a wasted opportunity. If it was done the other way, then each of the flashbacks could have been like a different chapter. Like “the night of the big party,” and we would only see it when the guys sitting around in the room with Buddy tied up, started talking about it.

So the real story is about Buddy going to work for this guy. Ackerman hires guy right away, without really getting to know him first, and guy meets Ackerman’s former assistant, played by Benecio Del Toro. Benecio and Spacey would reteam one year after this one in The Usual Suspects, a film where Spacey actually got Del Toro the part. Spacey remembered Del Toro from swimming with sharks and suggested him for one of the parts in suspects to director Bryan singer. Of course, Suspects is the movie that made both of these guys famous. Spacey even won an Oscar for his role in that film. However, here, in Swimming with Sharks, Benecio has a very small role and it is not very memorable. Still, guy can see just from the way that Buddy treats this former assistant, that maybe Buddy isn’t the nicest guy or the most understanding boss.

Ackerman is a movie producer who reads scripts, tries to sell them to big shot producers with loads of money, and then reaps the rewards if the movies get made. He’s like the real life Michael Ovitz, or the Harvey Weinstein, of more recent times. And he curses and calls names and says the most terrible things to anyone under him. Guy takes it for a while, not really seeing any other choice. He knows that this job is just a stepping-stone, and that while he will have to be abused, by the time he has done with it, he will have a great job waiting for him.

While working for Ackerman, guy falls for an older, more experienced producer, Dawn Lockard. Their first meeting is memorable, with guy taking her parking spot and her calling him on it, even though every other spot in the parking lot is available. It is a funny moment, and she seems like a total jerk in that first encounter, but as it happens, she ends up being cool.

Guy starts dating her, and dawn tries to get him to stand up to Buddy. Only Guy will not do it. He is okay with the abuse. In addition, Buddy pretends that he is doing right by guy too, telling guy that he is trying to get a script made that Guy gave to him. At one point, Buddy stays on the phone with a powerful producer as Guy sits in the room next to him. Buddy talks up guy to the producer, telling the producer how great guy is and how this script he is working on was all guys’ idea. However, when guy looks down at the phone, he sees that there is no light on, and that the producer that Buddy was talking to hung up a long time ago.

All of this is okay with guy. He does not like it, but he probably feels like, at least Buddy is making the effort to try to get me to think that he cares about me. Better that than for him to be making no effort at all, and just not care what I think. Still Buddy is lying and he’s also pushing guy to his breaking point. When we come back to the restaurant scene that opened the movie, we see the final catalyst that pushes Guy over the edge.

The movie has a hell of a surprise ending, but the problem is it’s the only really great moment in the entire film. Other than that one thing, this has been a very mediocre movie. There isn’t much that stands out or sets this movie above any others. The premise is something that we’ve seen before, or at least it feels like we have and the surprise ending just isn’t enough. This movie could have worked a lot better if things had been handled differently. For one thing, there should have been more characters. As it is, there are really only three. Sure, there are little bit players that pop up every so often, like the Del Toro character, but for the most part it’s the three of these guys, and there’s just not enough story there with only the three of them. This could have been a play. It probably would have worked a lot better in that form. As a movie, it is just okay.