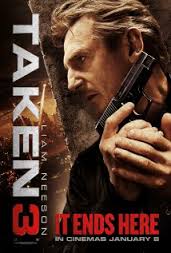 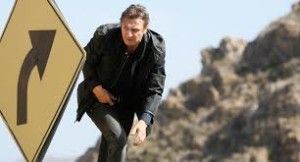 For better than the second movie, this is a pretty decent film with a storyline that nicely propels it along.

The action is lousy, but the plot is good. That’s something I never thought I would say about a Taken movie, and you might even say it’s the exact reverse of what characterized the first film in the series. That original movie was all about action and about keeping it’s story stripped down to the bare bones. With the third movie, it’s about plot. Sure there’s plenty of action too, only the action isn’t very good. This director clearly doesn’t know how to film action scenes, with massive close-ups and frenetic cuts. Still, the storyline is somewhat compelling and there are some clever scenes sprinkled about. This movie is far superior to the second film, but not even close to the first one.

Shockingly, Taken 3 is not all that bad. It is a very watchable and somewhat fun B movie. The reason for the surprise is the director, Oliver Megaton. This is the guy who directed the last film in the series, Taken 2, and boy was that awful. Megaton is a guy who has no concept of how to direct an action scene. He shows the scene by stringing together a series of quick cuts, with faster editing than you get in a Michael Bay film. The result is that for any single action, such as running up a rooftop, you get a series of at least three different shots. How about just show the guy running up the rooftop in one shot, where you can actually see what’s happening? Instead, we get a closeup on his foot going up the shingled surface. Maybe this guy thinks he’s being  artistic, but it would have been so much nicer to actually get to see what was happening to the character.

So this director is terrible at action scenes. That much was true about the second Taken movie and it is just as true with this film. Luckily, the story is a whole lot better. At the start of the film we get a series of fairly quick conversation scenes. Brian Mills (Liam Neeson) shows up at his daughter’s place with a giant panda. He shows up unexpectedly and catches her in the middle of something. This scene is very awkward and comfortable. The next few scenes get better. Mills has a moment with his ex-wife, Lenore, where she tells him that things aren’t going well with his marriage and that she still fantasizes about him. Then her husband shows up at his apartment and asks Mills to stay away from Lenore.

Aside from the awful ominous music that was playing during the husband scene, tipping us off that either this guy is secretly a bad guy, or that the movie wants us to think he is, these dialogue scenes work. I like the way the husband scene really felt like two guys sitting down man to man, making a reasonable request. There were no ridiculous threats, for example. But that music sure was awful. In fact, it’s really bad throughout the movie, constantly not lining up with what’s happening on the screen. Sometimes it leads you to believe something exciting is going to happen, and then it never does. An example of this is when Mills is in the car in a garage right when the police are closing in on it, but of course, when they get there, he is long gone. But the worst is when it just doesn’t fit the scene at all, like an action scene where Mills is getting beat up by a villain and all of a sudden we start hearing uplifting patriotic music. It doesn’t make any sense.

Mills gets a text from Lenny that she is coming over to his place, and he goes to pickup bagels. When he gets home, her car is parked outside and her dead body is lying on the bed. The police show up right away and try to arrest Mills, only he puts up a fight and escapes. That leads us to the horrible chase sequence that is all closeups on body parts and no full shots where you can actually see the person moving. Whatever cool ideas might have been a part of this sequence, like a moment where he jumps off a ledge and lands on the hood of a police car, it is all handled in rapid fire shots so that you are not even sure of what’s going on. That’s how the police car hood jump is filmed. One shot of him on the car and then he’s off. We have to a double take and say to ourselves, did he just land on that? Why not actually show it?

The good news is, either we get used to this action style, or it just gets a little better and more unnoticeable as the film goes on. It’s never very good, but with everything else going on in the story, it’s easy to stop caring and getting frustrated by how poorly it is filmed. Mills gets to Lenny’s car and checks her GPS. It shows that she was at a gas station on the other side of town earlier that day. So he goes to the gas station and looks at the security tapes. That’s when the police arrive wanting to see the same thing. They catch Mills there, and another chase breaks out.

This one happens on the highway, with Mills in police custody first, in the back of a squad car. He breaks free, of course, and starts driving the car himself, kicking the detectives out first. Now we get a massive highway chase complete with cars that fly up into the air and cannisters that pile off trucks and land on cars. If only this was filmed better, it might have actually been cool. This all leads to Mills on one of the floors of a parking garage in his police car. Once again, director Megaton drops the ball with his filming, showing us the bumpers of police cars that pull up, instead of showing us the actual cars and where they are in relation to Mills’ car. It seems like common sense to give the audience a sense of where things are in the scene, but this director doesn’t get it. So when Mills slams into reverse and pummels it through an elevator door and down a long elevator shaft, we can only imagine that those police cars were blocking him in so that he had no other choice.

Forest Whitaker is in the movie playing the head police detective on the case. It’s nice to have another name cast member other than Neeson and Famke Jansen (who really only has one scene in this film.) And then there’s Lelan Orser back, as Neeson’s former CIA buddy who is always willing to help. These are good actors, and in Orser’s case he is once again utilized here (whereas in the second film, he was in the movie, but not used at all.) Whitaker, on the other hand, is wasted here. He is trying to do a version of the Tommy Lee Jones character from the Fugitive, meaning he’s got lines where he says it doesn’t matter to him if Mills is innocent or guilty, but only that he brings Mills in. The problem is that nothing about what Whitaker is doing feels fresh. He did a better job of playing the head police detective role in The Arnold Schwartzenegger film The Last Stand.

One reason why this movie works whereas the previous film was such a failure is that this one actually has clever ideas and interesting scenes. In one moment, Mills tells his friends that he wants to be at Lenore’s funeral, and they show up there with cameras on their lapels so that he can watch the funeral through the cameras. In another scene, he puts a note on a bottle for his daughter, that says “drink me,” and when she drinks the liquid she instantly becomes sick, prompting her to run to the bathroom to vomit. It turns out Mills put something in the drink to make her feel that way so that he could meet her in the bathroom. Once there, he hands her an antidote pill. This stuff might seem stupid, but it’s also somewhat clever.

I also like all of the twists in the second half involving the villains. We were given a scene at the start of the film where a bunch of mafia figures executed a man to send his boss a message about paying them. In the second half of this movie we find out what that was all about and who that boss actually is. And then there are many more twists to follow. All of this works. The storyline here is definitely a take on The Fugitive, but so what? Everything is a take on something else, and if we can’t take from the best movies than what can we take from? Of course, creativity and originality push anything way further than just taking the parts of other, better films, but for a movie like this, you have to figure it’s going to feel familiar. After all, if nothing else, it’s the third movie in a trilogy of B action movies.

Taken 3 is just an okay movie, but it is far superior to the previous film. Like the Hangover part III and it’s place in that series, this movie is much better than the second film, but much worse than the first. The original film was something unique and different. It was bare bones as far as storytelling, but boy did it deliver on action. With this third movie, the action is actually the weakest part. There are hallway shootouts where you have no idea what’s happening and the movie doesn’t give us enough reason to want to care. Maybe Megaton is trying to channel what director Paul Greengrass did with the Jason Bourne sequels, using close-ups and hand held camerawork, but he doesn’t even come close to getting it right. The movie looks spectacular with bright colors and it clearly being shot on digital, which is a step up from the last film that was all dark and dreary. If only this director knew how to shoot action properly, it could have been a much better film.