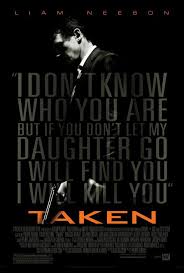 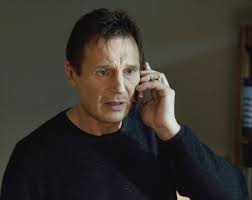 A bare-bones thriller that is violent, simple, and intense all the way-through.

Taken is the single movie that relaunched Liam Neeson’s career as a modern day action star. This guy is the John Wayne or Clint Eastwood of a new generation, an older man with no reservations and a hell of a set of fighting “skills.” The action in the movie taken is of course fantastic, in a brutal and gritty way that puts the Jason Bourne films to shame (a difficult task considering those movies are all great), but it’s the story in all it’s simplictiy that really carries this movie through. This is the story of an overseas kidnapping (think Hostel without the torture-porn horror element.) when a retired government operative’s daughter is kidnapped, the man springs into action and never looks back. The movie is part detective work, part thriller, part action film. This isn’t a huge explosion, crazy weapons kind of thing, but more of a gritty, hand-to-hand, down and dirty movie. The kind that actually feels kind of real. taken is a non-stop, adrenaline-filled rollercoaster ride.

Taken is a hell of an action movie. It’s a film that is gritty and intense in a way that uses a very simple plot to keep it moving forward. This is the kind of film that really gets at the heart of a character caught in an awful situation, and takes us through his experience, in a “what would you do,” kind of way. Only this character is not an everyman, normal guy. He’s a unique individual with a very special set of skills, and so the fact that we can relate so well to him is all the more testament to how good Liam Neeson is in the role.

Neeson plays Brian Mills, a former operative for the U.S. government who used to go on the secret missions that were completely off the books and off the record. This guy and his friends were a team of elite specialists, but now they’re all long retired. Sounds like the usual setup for an old-timers action movie, right? The next move in one of those films would be for Brian and his friends to decide to pull off one last heist job or rescue mission. Taken is a very different kind of film.

Brian has no interest in going back to the kind of life he once lead. Ever. but then his daughter decides to go to Paris with a friend of hers, and suddenly Brian is put on high alert. He’s paranoid about the two girls going to Paris by themselves, but he doesn’t actually know the half of what they have planned for overseas. It takes some convincing for the girls just to get him on board with what they’re telling him. Turns out their plan involves going to different countries around europe, following the band u2 around on their tour, and not even being around the people they say they will be. there are cousins, who the girls say they will be staying with, only these cousings are not actually there. it’s just the two of these girls on their own.

as it happens, brian is right to be paranoid. the girls are naive and they give their address out to the first cute boystranger they meet. this guy turns out to be a creep who drops them off, asks what floor they’re on, and then calls some buddies to go over there and kidnap them. it’s while brian’s daughter, kim, is on the phone with her father, that she sees her friend get attacked in another room. she tells her father everything she is saying, and brian talks her through exactly what to do. he tells her to get under the bed and to shout out anything she notices about the guys. he also asks her if there was anyone the girls met since arriving and gets a little bit of information that way. Brian springs into action, on the other end of the line, getting a recording device in place to have a sample of the kidnapper’s voice.

it’s a solid thirty minutes into the movie when brian gets over there, to paris himself, but that opening structure of the movie works out perfectly. we needed the first thirty minutes to establish the character, where he was in his life, and what his priorities were. mainly, brian is devoted to his daughter. he moved recently in order to be closer to her, and visited a store for months before buying a karioke machine for her. this is a dedicated guy who is practically obsessed with the well-being of his daughter.

the movie is only an hour and thirty minutes long. that means the next hour of the film is all about brian kicking ass. the timing is perfect. the story never feels too long or too complicated. it doesn’t try to pull the wool over our eyes at any point with a twist. instead, this film knows exactly what it is, and doesn’t want to hide that from us and be decieving or manipulative in any way. the story might be dark and gritty, but that is exactly the point. it goes all out and holds nothing back, including the deaths of young girls, and selling of them into prostitution.

once brian arrives in paris, the action kicks in right away. the setup is over and the time to get moving has begun. brian and his friend, sam (leland orser), are able to do an incredible amount with the limited information they have. sam helps brian figure out exactly who the kidnapper was, based on his voice, and brian is able to use photos from his daughter’s camera to catch a reflection of the guy she met at the airport, enhance it, and then go and find that guy.

aside from sam, brian also gets help from a cop her knows, in paris. the only difference is, this one has to be convinced, and brian uses some heavy violence and an attack on the guy’s wife to do the convincing. it’s some horrid stuff, considering the wife did nothing wrong, and welcomed brian in, but the point is that this guy has a very tiny window of time to get his daughter back and is willing to do anything in order to rescue her.

much of the plot involves following clues. brian gets a translator to help and approaches a prostitute from the same background as the kidnappers. from there he meets her pimp and follows the guy to a construction site, where he puts the first real clues together, and undergoes a hell of a car chase and action scene.

the construction site is only the beginning. from there, brian finds himself at a holding house for these women, and that leads him to even do some torture. every attack gives him another clue or another name, and soon he is at a private party, dealing with the first of the bosses involved in the real business angle of selling these girls. it’s like watching a videogame of a character taking on different levels and guardians. that’s the beauty of this movie. the story might be simple and straight-forward, but nothing is ever easy for this character. there’s a cobination here of great action and a very direct story. it all comes together flawlessly to make a modern day action movie that is already a classic.