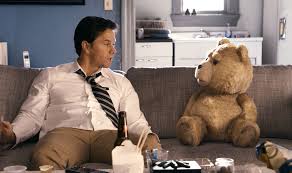 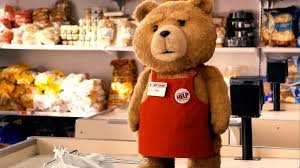 A creative movie that is loaded with great offensive humor, and gets funnier and better with every new viewing.

Ted is a movie that works because of its humor, more than anything else does. I used to think a good comedy didn’t need a great plot. It just needed funny jokes. In some ways, I still do, and ted is a good example of that. The premise is certainly original, about a guy whose teddy bear comes to life and becomes his best friend. However, the plot then gets itself mixed up with some of the usual clichés. For every generic scene, however, a very funny and unexpected scene follows it. In addition, the humor is there throughout the film. There are two different villains in this movie; a criminal one and a scumbag at work one. There are also lots of storylines, and some outrageous humor that holds nothing back. It’s not great, because of the way that the overall plot often seems familiar, but it is definitely fun and keeps you laughing the whole time.

Ted is a movie that comes up with a very fresh and creative idea for a comedy and yet still manages to feel formulaic by its end. So what? Ninety percent of this movie is unique, and that is quite the accomplishment. The movie is about a boy who wishes that his teddy bear can come to life and be his best friend for real. In addition, that’s exactly what happens. There is a fun introduction about the boy, John, and how he has a hard time making friends. There are some jokes about Christmas and the Jewish kids on the block getting beat up, and the next thing you know, we are at Christmas morning with young John getting his present and making his wish.

However, the real movie starts with John as an adult, played by mark Wahlberg. We get a quick run through of his life using photographs that play over the title sequence and show off adult John and the teddy bear having all kinds of fun adventures. We also see John starting to date Lori (Mila Kumis), in these photos, and how the two of them start hanging out with ted together. This will become a sore spot for the movie.

In fact, the main plot of the movie is about how ted gets John into trouble and Lori wants John to make ted move out. That’s somewhat ridiculous, when you think about the idea of a teddy bear renting his own apartment, but it happens, and the story moves on. The movie works because of the way that it embraces such things, without being afraid of how out there and crazy, they might be. Ted even gets a job working the cash register at a supermarket, doing all kinds of inappropriate things, and constantly being promoted.

The first half of the movie is about everything that leads up to ted moving out. Lori’s problem is more than just ted getting John into trouble. She doesn’t like the way John acts around ted. It’s like two best friends hanging out all the time. Lori feels left out, and rightfully so, considering when the boys make jokes with each other and Lori tries to jump in, they just tell her she’s doing it wrong.

Lori has problems at work too. Her boss, Rex, (Joel McHale) is a real creep who constantly hits on her. He makes the work environment very uncomfortable, not only for Lori, but for all the women in the office. This is one of the many plot lines of the movie, and it works nicely. Clichéd as it may be, Joel McHale handles the villain role well, inviting ted and Lori to a party, and then sabotaging John when he asks red for a favor. When John and Lori split (and you know they will, because every movie with a romance has the characters go through that), she goes out on a date with red. I’m glad that Lori never changed her feelings about this jerk, though, and stayed true to her character, unlike some movies that bring the main girl together with a creep just for shock value (the five year engagement, for example.)

By the halfway point of the movie, ted has moved out, and John is finding all kinds of excuses to leave work and come visit his best friend’s apartment. On the night of the party at Rex’s house, he finds a reason to leave the party and go to another one at Ted’s place, and it’s the kind of reason he just can’t say no to. You see, John and ted have been obsessed with the 80s movie flash Gordon their whole lives. It’s something they embraced since childhood. And now, the actor who plays flash Gordon in the real movie has just shown up to Ted’s party.

The flash Gordon stuff is hilarious, including the use of the famous queen song and images of John mixed into the original Gordon movie. It’s one of many great ideas that work for this film. In fact, the humor in this movie is what makes it so worthwhile. The plot might have all the usual elements, including boy and girl make progress in their relationship, then boy and girl fight and split up, only to come back together again, but it’s the humor that runs the show. This movie was written and directed by Seth McFarlane, who makes the TV show family guy, and just like that show, the movie is filled with pop-culture references. Ted is the kind of guy who insults everyone and everything and has no shame. In the beginning of the movie, he’s making fun of Justin Beiber. By the end he’s making jokes about Taylor Lautner. And there are plenty of insults about other celebs that come in between.

Aside from constantly making witty insults and remarks, ted is extremely crude, and that is also a lot of fun. He has a great time with the new check out girl at the supermarket where he works, and makes sexy gestures to her behind the register. There is a great moment where he goes too far with one of these gestures. But still, this girl ends up becoming Ted’s girlfriend, complete with a strong Boston accent, and when ted and her go on a double date with John and Lori, things don’t work out quite as well as expected.

By the end of the movie, a full-fledged villain has appeared, creating a new plot that was slowly woven in throughout the film, but only really became anything substantial at the end. It’s the kind of plot point that changes this from a comedy to a crime / action movie, and it’s a little clichéd. I understand the reason for it, because it gave the movie a new breath of fresh air at a time when it was otherwise running out of steam, and it also gave us a climax, but it just felt like the usual kind of thing, where as most of this movie seemed to be avoiding the usual at all costs.

Aside from the ending, almost the entire movie works. It’s very funny and that’s the main reason why it’s so enjoyable. Ted, the bear, is great, but so is Wahlberg. He’s a lot of fun hear delivering a heavy Boston accent, like he did in the departed. And him and ted do all sorts of fun, raunchy, wild things together, from smoking out of bongs to imitating Boston girls having sex. The plot does feel somewhat familiar at time, and that’s because other than the fact that it’s a bear that won’t move out instead of an annoying friend, things are pretty much the same as usual. Other than the bear idea, this is just a retread on You, Me, and Dupree as well as all the other movies exactly like it. The storyline here is nothing great, and even when it does try to switch gears by the ending to give us a villain and a climactic finale, it feels out of place. That ending didn’t really go with the rest of the movie that put comedy ahead of everything else, including plot, but by coming so late in the movie, it didn’t really hurt the film much either. Ted is a good movie, filled with hilarious moments and outrageous ideas.